Who is Julian Assange and why does America hate him so much?

Julian Assange can appeal against extradition at UK’s Supreme Court 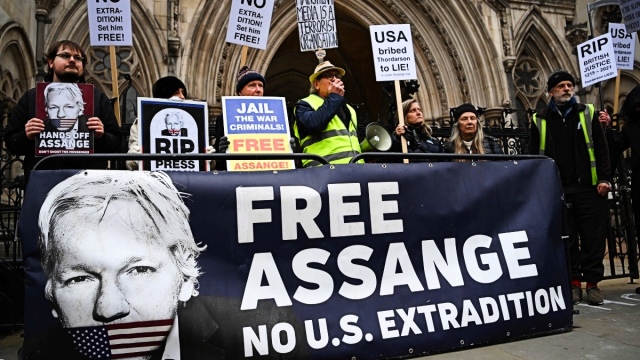 Over the weekend, here in Australia and in the UK, thousands of well-meaning protesters lined up to support calls for the release of a high-profile computer hacker named Julian Assange.

Assange has been an internationally renowned hacker, active since he was 16 years of age — using the ‘handle’ Mendax and pleading guilty in 1996 to 24 charges of hacking into the Melbourne computers of Canadian telecommunications company Nortel. He was fined and released on a good behaviour bond.

Assange has now spent three years in a British jail pending extradition to the US on hacking charges.

Meanwhile, his public defence has been hijacked by political activists running a press freedom campaign. His celebrity lawyers have lost multiple attempts to stop his extradition.

Manning, a soldier at the time, stole hundreds of thousands of classified US military files. Ironically, during the time that Assange has sought refuge in an Ecuadorian embassy and fought to avoid a court appearance, Manning has been jailed and then had her sentence commuted.

Commutation comes with the implied acceptance of guilt. It does not mean a conviction has been overturned, so the prospects for Assange if he ever fronts an American court are dire. Especially if you read the very comprehensive indictment, containing detailed technical evidence relating to the hacking allegations.

American human rights lawyers warn against fighting charges under the rarely used Espionage Act, which Assange faces. They say such cases are pretty much unwinnable.

In a recent interview, controversial Australian expat journalist John Pilger, one of Assange’s strongest supporters, made a bizarre claim.

“If Julian is extradited to the United States, I think it will effectively end real independent investigative journalism”.

However, the reality is Assange is not really a journalist and contrary to claims by Pilger and others the case has limited consequences for press freedom.

Not one journalist or any media organisation that published the stolen files has been pursued, much less charged — including Assange’s WikiLeaks.

WikiLeaks dumped huge amounts of confidential material straight onto the internet, unfiltered and uncorroborated. If it had merely passed it on to the global media outlets that subsequently, but very selectively, published reports based on some of the stolen files Assange’s identity as a ‘source’ would have been protected.

Although there are journalists who applaud his actions, there are many who don’t believe that such mass leaking is responsible journalism. That’s another reason why the press freedom angle is weak.

At the very least WikiLeaks arguably violated the privacy rights of people named in documents they reasonably expected would be kept confidential. The recent uproar over the Optus hacking highlights the sensitivity we attached these days to the information we provide to third parties.

So why is the US so determined to convict Assange?

The most sensational material his WikiLeaks website exposed — the ‘Collateral Murder’ video of helicopter gunships firing at civilians in Baghdad — has been widely circulated via mainstream media and online. Yet its release has seen anyone charged with war crimes.

The pursuit of both Manning and Assange, as Manning’s alleged co-conspirator, is all about frightening off anyone else contemplating similar actions. It’s also about American military pride. Not only did he allegedly help steal their files, Assange taunted them relentlessly for years.

Hopes of a change of heart by the incoming Biden administration were optimistic given WikiLeaks’ alleged covert support for Donald Trump.

Calls for the Australian government to demand Assange’s release understate the extent to which both sides of American politics are aligned on national security issues.

Further complicating the matter is the fact that the actions of Manning and Assange would be criminal offences pretty much everywhere around the world.

Rather than continuing their current problematic press freedom campaign, those activists who just took to the streets would arguably be better engaged arguing for global whistleblower laws.

Laws that protect whistleblowers and also anyone who assists them – including journalists, lawyers and even computer hackers.

If they hope to see Assange released any time soon they should persuade him to do a plea bargain on one of the lesser charges with a maximum penalty of five years imprisonment.

With an allowance for ‘time served’ he could be out and back here in Australia with his young family in time for Christmas.

is a prominent public interest advocate and a former journalist. He has recently launched a campaign to secure whistleblower laws from both state and federal governments

The post Who is Julian Assange and why does America hate him so much? appeared first on The New Daily.