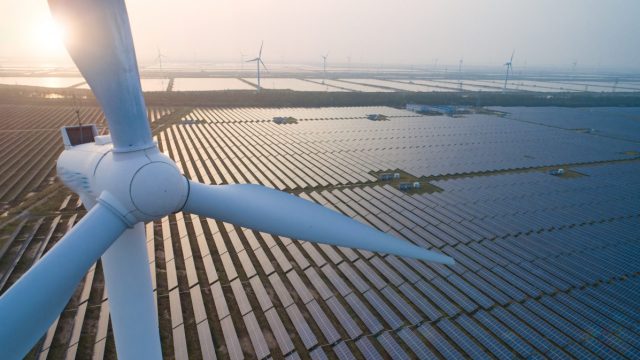 The government says it is on track to deliver on a plan to deliver lower power bills through renewables as the Coalition says it will oppose a law increasing carbon emission reductions.

The Australian Energy Market Operator (AEMO) led a takeover of the national electricity market last week after operators were accused of prioritising their profits over household supplies.

The unprecedented intervention came as temperatures dropped and prices soared with one-quarter of coal generators offline, giving every indication national power supply was in a state of upheaval.

But senior minister Tony Burke says the government remains on track to deliver an election pledge to reduce household power bills by $275 through its Powering Australia policy.

“We’ll get it done,” he said on Sunday. “We stand by the modelling.

“What we’ll do in particular with transmission allows you to get cheaper energy onto the grid [… that will] deliver that downward pressure on prices.

“Renewables are the cheapest form of energy, but if you want to get your renewables and your battery storage on to the grid you need to improve transmission.”

Opposition Leader Peter Dutton signalled the Coalition would not support legislation for a more expensive, 43 per cent emissions reduction target by 2030 but declined to specify the size of its own, more modest target.

“We will announce that before the next election,” Mr Dutton told the ABC.

The government will introduce legislation enshrining a higher target into law next month, a step it says will support future investment in renewables.

But the Opposition Leader denied that the Coalition bore particular responsibility for an energy crisis after nine years in power, suggesting that conflicting messages from state governments had contributed to an overall failure of energy policy.

“There is fault all round,” he said.

The government has dismissed critics calling for it to invest money in  coal-fired generators to shore up the national grid.

But Mr Dutton said that fossil fuels would need to remain part of the national energy supply.

“We’ve got a huge gas supply in the north and west of this country,” he said.

But without additional policy interventions further exploration of gas would ultimately increase the volume sold to international markets.

As state governments join discussions about possible avenues for reviving the energy market, options under consideration are export controls, such as those in place for Western Australia’s gas market.

AEMO led a takeover of the national electricity market after it accused operators of yanking power from sale in order to push prices higher.

Power companies said they were responding to a newly imposed price cap that made the sale of power uneconomical.

Under the terms of the current takeover, generators will take directions from AEMO about when to make their generation available to the broader market.

The national market will run according to a historical average of prices.

“There is no doubt there has been upward pressure on energy prices around the world, there’s no question about that,” he said.

“We had managed this in the lead up to the election successfully.

“We showed how you do that when you focus on supply and don’t demonise traditional sources of fuel.”

On Saturday New South Wales Premier Dominic Perrottet said that energy policy had been consumed by an ‘‘ideological war’’ that had discouraged investment.

The post ‘We’ll get it done’: Government stands by renewables goal as Dutton flags opposition appeared first on The New Daily.