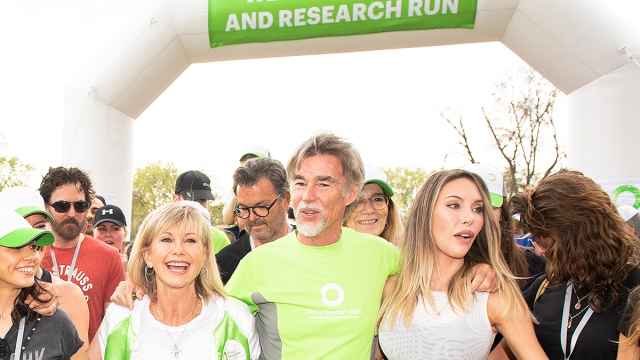 Two months after her death, Olivia Newton-John is still helping change lives with her annual Walk for Wellness fundraiser.

Family, friends and fans of the Australian singer and actor gathered on Sunday at one of her favourite spots, Alexandra Gardens in Melbourne, to raise funds for her cancer wellness and research centre.

The Grease star’s daughter Chloe Lattanzi was unable to attend but became emotional while speaking from the US to Australian TV presenter and long-time Newton-John friend Richard Wilkins during the event.

“It’s so beautiful to see how many Australians have come out to support my mum,” she told Nine’s Today.

“John and I are there in spirit,” she said, also speaking on behalf of Newton-John’s husband John Easterling.

"It's so beautiful to see how many people have come out in support of my mum," Lattanzi said through tears. #9Todayhttps://t.co/42KZIspdu8

The walk began with a singalong to one of Newton-John’s most popular hits Hopelessly Devoted to You before the crowd, including 200 registered dogs, got moving.

She battled breast cancer three times after first being diagnosed in 1992, leading her to create the Olivia Newton-John Foundation to fund cancer research.

She also founded the wellness facility in Melbourne, which is known as the ONJ Centre, that supports people living with the disease.

“Olivia absolutely beamed walking with family and friends and getting cuddles from the dogs that joined the walk,” her niece Tottie Goldsmith, who is a goodwill ambassador for the centre, said of her participation in previous years.

“She loved being surrounded by people from all walks of life, pulling together to support her dream and support those in need. This was a really special day for her, for all of us.”

Sponsorship and donations raised by the Walk for Wellness will help fund the centre’s evidence-based wellness therapies that ease the side effects of cancer treatment and support people emotionally, spiritually and physically.

“The wellness walk and wellness programs meant so much to Olivia. She really looked forward to it each year,” Easterling said in a statement.

“Olivia loved meeting so many patients who benefited from the ONJ Centre and the incredible souls who helped make this possible with their fundraising efforts.”