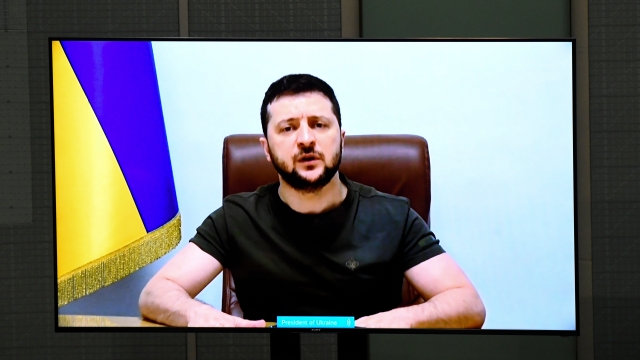 Ukrainian President Volodymyr Zelensky has called on Australia to lobby the international community to vote against Russia at the UN over its attempt to annex more of his war-torn nation’s territory.

Mr Zelensky addressed the Lowy Institute via video-link on Thursday night, where he urged the Albanese government to convince other countries to denounce Russia following its claims to four Ukrainian regions.

“On international platforms, there’s a need for clear and straightforward condemnations of Russia for their attempts to annex Ukrainian territory,” he said through an interpreter.

“Next week, the UN General Assembly will consider a resolution of non-recognition and condemnation of another attempt to annex territory by Russia.

The Lowy Institute hosted the President of Ukraine @ZelenskyyUa for a special address this evening. Watch his remarks, and a conversation afterwards with Executive Director @mfullilove at our website: https://t.co/q2kjohH644 pic.twitter.com/kSKUPunqJw

“I am asking Australia to use all of its influence to convince as many countries as possible not to remain neutral, and to vote for international law and against a Russian annexation.”

Foreign Minister Penny Wong slammed Russia over the “sham” referendums it held in the regions it’s trying to claim.

She also announced the government had filed an intervention in the International Court of Justice supporting Ukraine’s claims Russia has violated the Convention on the Prevention and Punishment of the Crime of Genocide.

Mr Zelensky said Vladimir Putin would use “nuclear blackmail” to cower nations from standing up to Russia, and said a criminal who doesn’t receive adequate punishment for his offences would perceive it as “permission” to reoffend.

When asked if Ukraine’s application to NATO had received a response, Mr Zelensky said in reply, without his country the security alliance would not be as strong.

He also said it was an opportunity to prove NATO wasn’t afraid of Russia.

Mr Zelensky also described his meeting with Prime Minister Anthony Albanese in his nation’s capital Kyiv in July as “wonderful”.

“Thank you for the support Australia, and glory to Ukraine,” he said.

Australia has promised 60 Bushmaster vehicles as part of a larger package of military aid to help Ukraine defend itself against Russia’s invasion.