‘It means so much’: Celebrities share their abortion stories after Roe v Wade 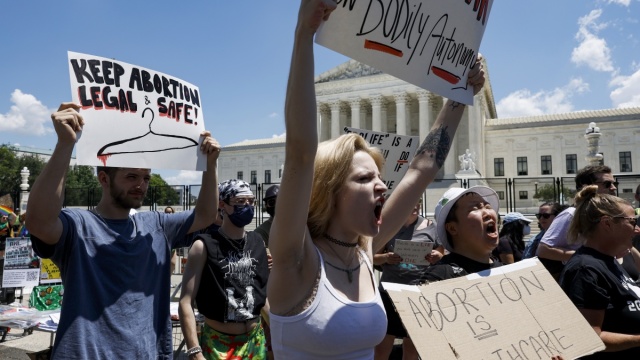 Demonstrators have taken to the streets in cities across the US to protest the US Supreme Court’s overturning of the landmark 1973 Roe v Wade abortion ruling – amid fears of weeks of violence across the nation.

Angry crowds also gathered outside the Supreme Court building in Washington DC, where anti-abortion activists erupted in cheers after the ruling, while some abortion rights supporters were in tears.

US President Joe Biden condemned the decision, which will dramatically change life for millions of women and exacerbate growing tensions in a deeply polarised country.

Mr Biden condemned the ruling as taking an “extreme and dangerous path”.

“The court has done what it has never done before: Expressly take away a constitutional right that is so fundamental to so many Americans.”

There were protests in cities such as New York, Atlanta, Chicago, Denver, Los Angeles and Seattle.

Ten people were arrested late on Friday (local time) in Oregon during a demonstration dubbed a “Night of Rage” in response to the court ruling. In Iowa, a protester was injured by a truck that appeared to drive through a demonstration.

Elsewhere, the US Department of Homeland Security warned of potential violence and extremist activity in response to the landmark Supreme Court’s ruling.

A memo from the DHS Office of Intelligence and Analysis warned federal and state government officials, including judges were probably “most at risk for violence in response to the decision”. It noted that potential violence was expected “for weeks” following Friday’s decision, given that domestic violent extremists “may be mobilised to respond to changes in state laws and ballot measures” related to abortion.

The assessment, DHS said in the memo, was based on an increase in violent incidents after a draft was leaked last month. Earlier incidents, cited in the memo, included arson attacks targeting pregnancy resource centres and vandalism and threats targeting “religious facilities perceived as being opposed to abortion”.

It followed the court upholding, in a 6-3 ruling powered by its conservative majority, a Republican-backed Mississippi law that bans abortion after 15 weeks of pregnancy.

The vote was 5-4 to overturn Roe, with conservative Chief Justice John Roberts saying he would have upheld the Mississippi law without taking the additional step of erasing the Roe precedent altogether.

The decision will intensify debate over the legitimacy of the court, once an unassailable cornerstone of the American democratic system but increasingly under scrutiny for its more aggressively conservative decisions.

The ruling restored the ability of states to ban abortion, with 26 either certain or likely to take that step.

Mississippi is among 13 states with so-called trigger laws to ban abortion with Roe overturned.

In a concurring opinion that raised concerns justices might roll back other rights, conservative Justice Clarence Thomas also urged the court to reconsider past rulings protecting the right to contraception, legalising gay marriage, and invalidating state laws banning gay sex.

Justice Brett Kavanaugh appeared to nix an idea advocated by some anti-abortion advocates the next step was for the court to declare the Constitution outlawed abortion.

Mr Biden said empowering states to ban abortion made the US an outlier among developed nations on protecting reproductive rights.

He said his administration would protect women’s access to medications approved by the US Food and Drug Administration, including pills for contraception and medication abortion.

The ruling is expected to set off a fierce political fight across the US about whether abortion should be restricted or prohibited entirely. It will almost make the abortion debate a key part of the looming midterm elections.

“This fall Roe is on the ballot,” Mr Biden said, calling on Congress to pass legislation restoring a nationwide right to abortion.

“The health and life of women in this nation are now at risk.”

World reacts to US ruling

Britain, France and some other nations called the ruling a backwards step. The Vatican praised it, saying it challenged the world to reflect on life issues.

US companies, including Walt Disney, AT&T and Facebook, said they would cover employees’ expenses if they now had to travel for abortion services.

“The Constitution makes no reference to abortion, and no such right is implicitly protected by any constitutional provision,” Justice Samuel Alito wrote in the ruling.

Roe v Wade recognised the right to personal privacy under the Constitution protects a woman’s ability to terminate her pregnancy.

“Roe was egregiously wrong from the start. Its reasoning was exceptionally weak, and the decision has had damaging consequences,” Justice Alito said.

“Whatever the exact scope of the coming laws, one result of today’s decision is certain: The curtailment of women’s rights, and of their status as free and equal citizens,” they wrote.

The ruling empowered US states to ban abortion just a day after the court’s conservative majority issued another decision limiting states’ ability to enact gun restrictions.

The abortion and gun rulings illustrate the polarisation in America on a range of issues, also including race and voting rights.

Overturning Roe was long a goal of Christian conservatives and many Republican officeholders, including former president Donald Trump. As a presidential candidate in 2016, he promised to appoint justices to the Supreme Court who would reverse Roe.

During his term he named three to the bench, all of whom joined the majority in the ruling.

Asked in a Fox News interview whether he deserved some credit for the ruling, Mr Trump said: “God made the decision”.

The post ‘Violence for weeks’ feared after landmark US abortion ruling appeared first on The New Daily.