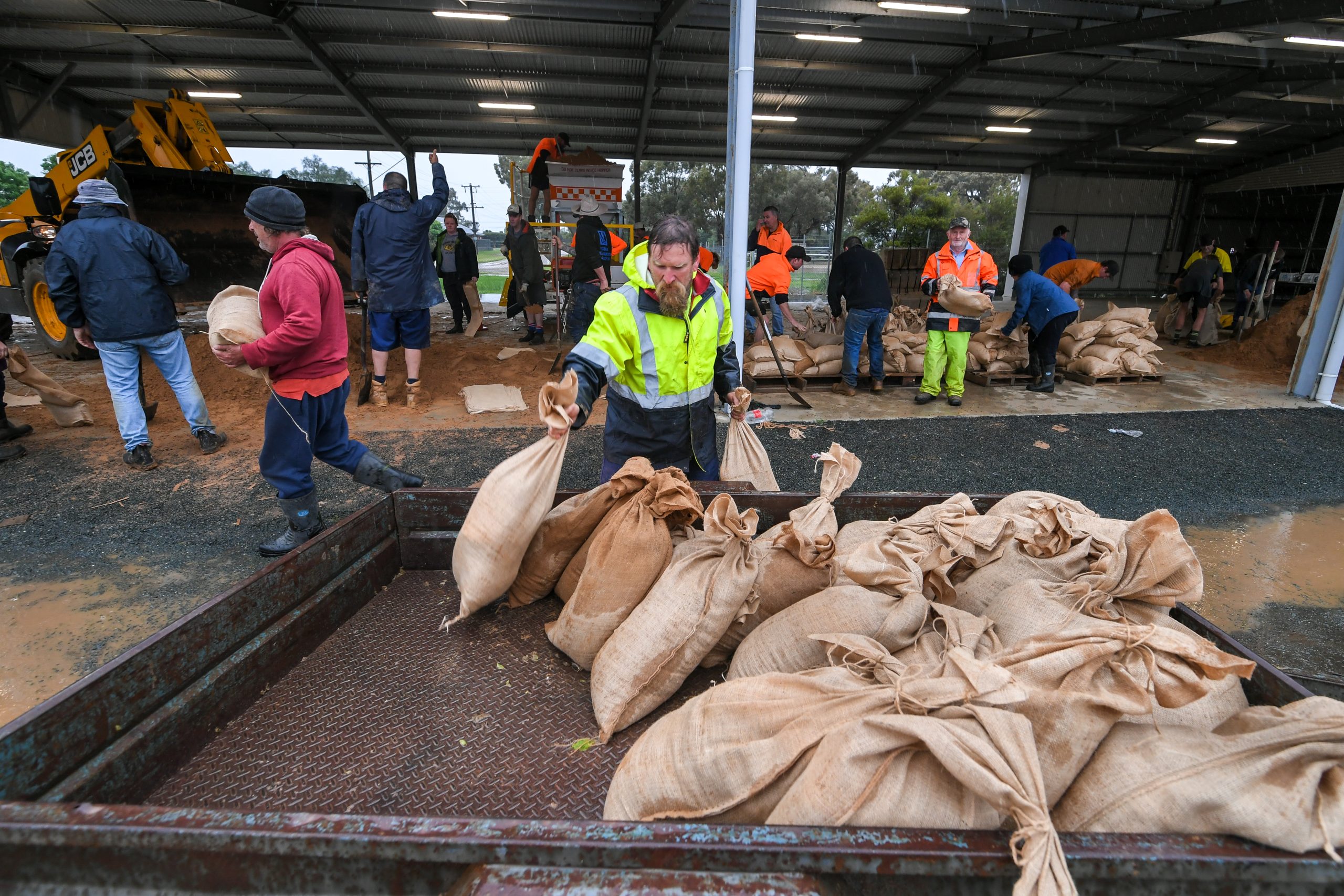 Residents have been ordered to evacuate a small Victorian town north-west of Bendigo as authorities warn a dam is likely to fail, releasing a metre-high surge of water.

Shortly after 1am on Friday, Vic Emergency said the Skinners Flat Reservoir was "likely to breach", sending three feet (about one metre) of "strong fast moving waters" through the Wedderburn Township along the Calder Highway and out towards Wedderburn Junction Road.

A relief centre had been set up at Wedderburn Hall and people were urged to evacuate as soon as possible.

"If the Skinners Flat Reservoir has already been breached at the time of receiving this message, cease evacuation and shelter towards the back of your house for approximately one hour, or until the water subsides," authorities warned.

Dozens of schools across Victoria are closed and train lines are cut across a great swathe of the north as the state waits for the worst of the wet weather to clear.

The powerful weather system has dumped up to 200 millimetres of rain and forced three towns to evacuate. 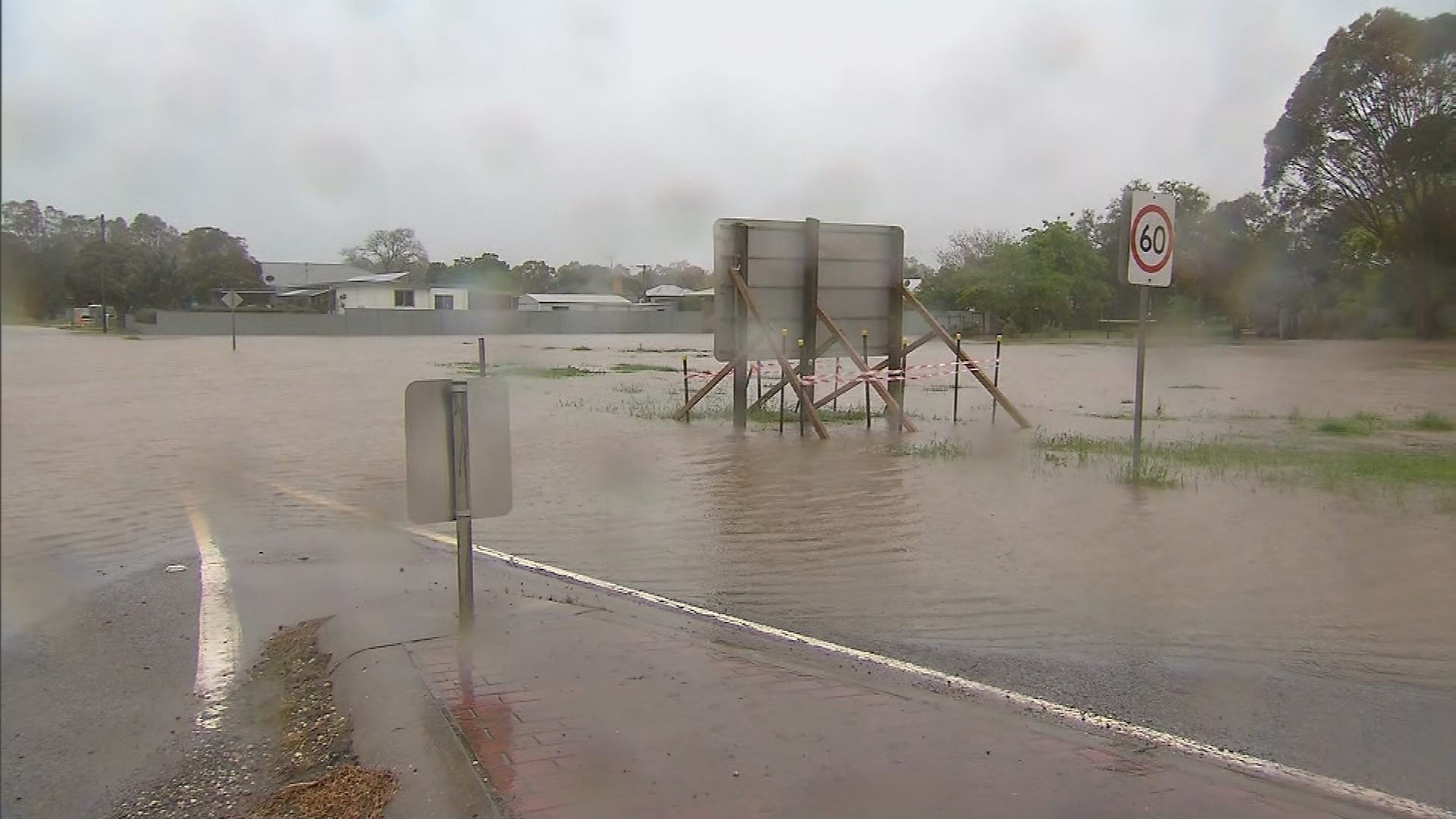 Residents from Carisbrook, Seymour and Rochester were ordered to leave and some people along the Goulburn and Campaspe rivers and Seven Creeks were told to head for higher ground.

Dozens more areas, including Melbourne suburbs along the Maribyrnong River and Merri Creek, were still under watch and act alerts for flooding early this morning.

The at risk areas include Brunswick, Coburg, Fitzroy and Northcote in the inner-north and Essendon, Sunshine, Footscray and Yarraville in the west.

But the worst of the weather was felt in the north as a strong cold front stretching from Echuca into East Gippsland caused widespread flash flooding and dumped heavy rain. 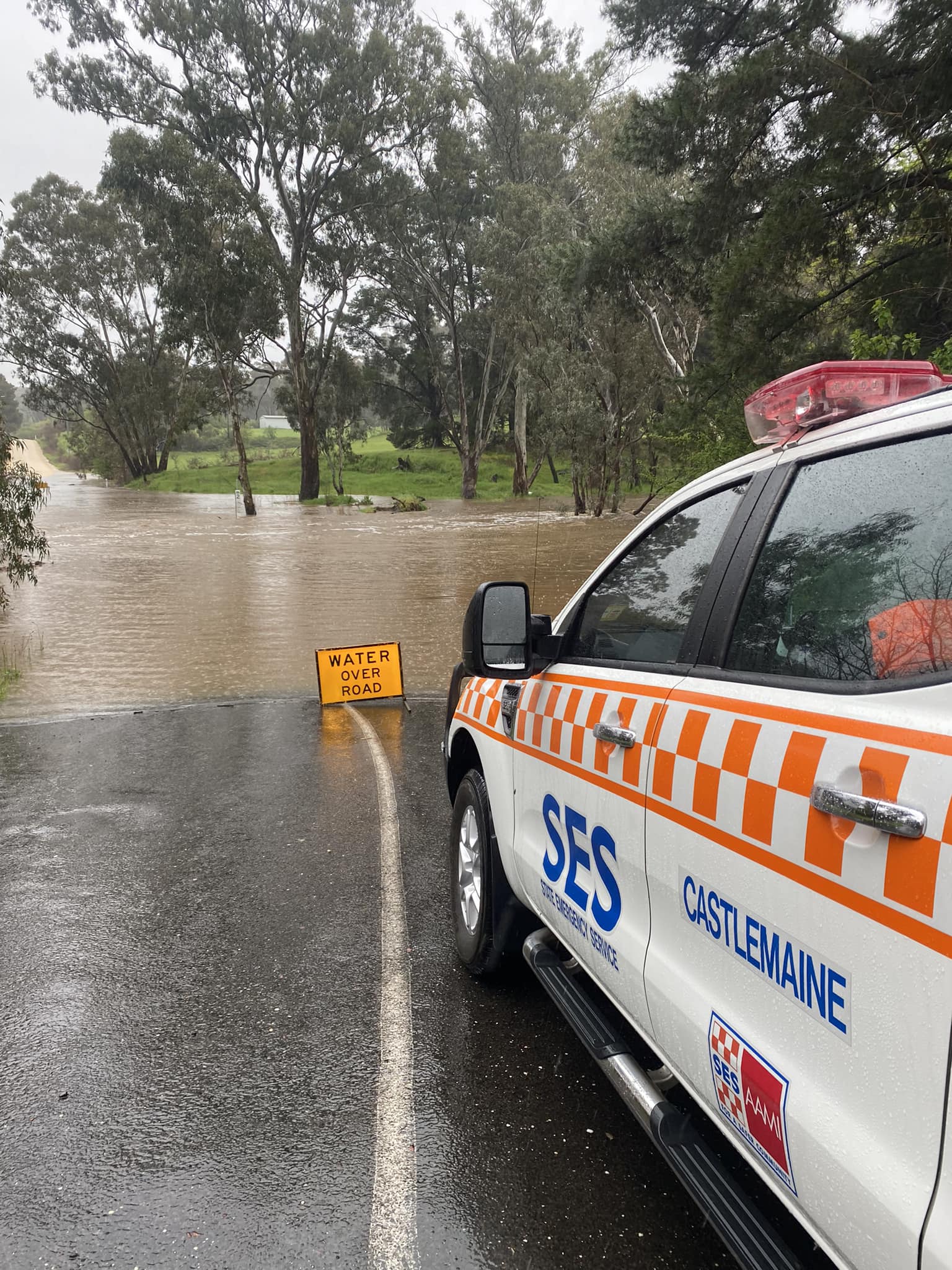 Strathbogie, about 125 kilometres north-east of Melbourne, copped 202 millimetres in the 24 hours to 9pm, with 192 millimetres at Charnwood and between 130 and 170 millimetres at Moroko Park, Handcocks, Seymour and the Mount Buffalo Chalet.

Severe weather warning for much of Victoria﻿

A severe weather warning remained in place overnight but the Bureau of Meteorology expected the weather to clear during Friday morning.

Forecasters predicted six-hourly rainfall totals of 30 to 50 millimetres, with daily totals in the 50-to-80-millimetre range, up to 120 millimetres in higher terrain.

The bureau warned of the potential for mudslides and debris washed across roads. 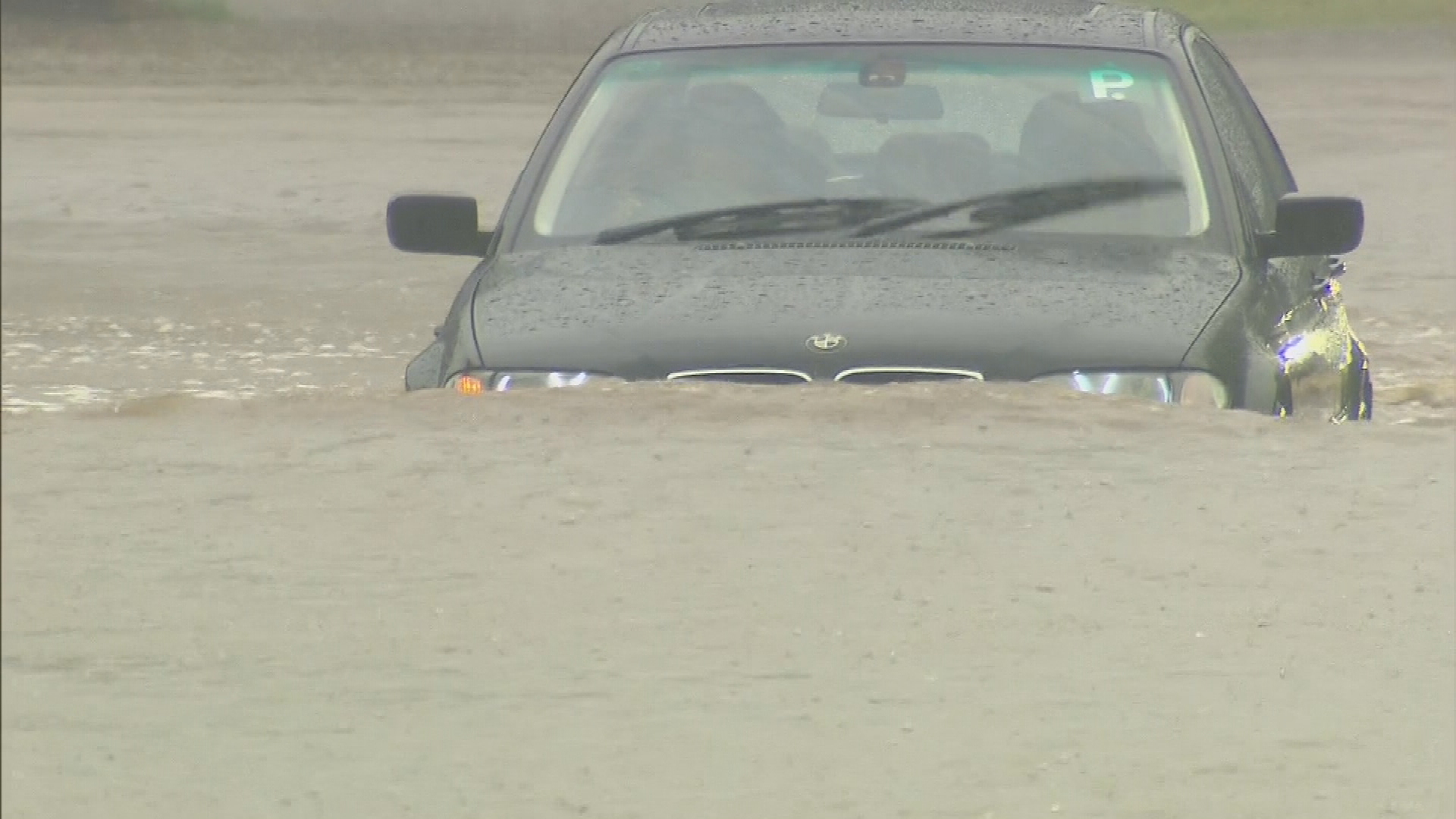 Nine waterways were under major flood warnings early on Friday morning as Vic Emergency warned the Campaspe River was expected to exceed the level it reached in the January 2011 floods.

The other affected systems were the Maribyrnong, Weribee, Ovens, King, Goulburn, Loddon and Avoca rivers and the Mount Emu, Seven and Castle Creeks.

A moderate flood warning was current for parts of the Yarra, with a major warning in parts of the Murray and moderate in other areas.

The weather played havoc with transport, leaving veterinary nurse Madeleine Sargent and several others stranded for hours on the way from Melbourne to Albury.

V/Line cut all services, including replacement coaches, on the Shepparton, Seymour, Albury, Echuca and Swan Hill lines, leaving Sargent and others stuck at Seymour before boarding an 80-kilometre bus to Shepparton.

Sargent told 9News.com.au she and three others travelled the remaining 180 kilometres to Albury in a taxi.

V/Line said the lines would remain closed into Friday morning, with a decision still to be made about resuming later in the day. 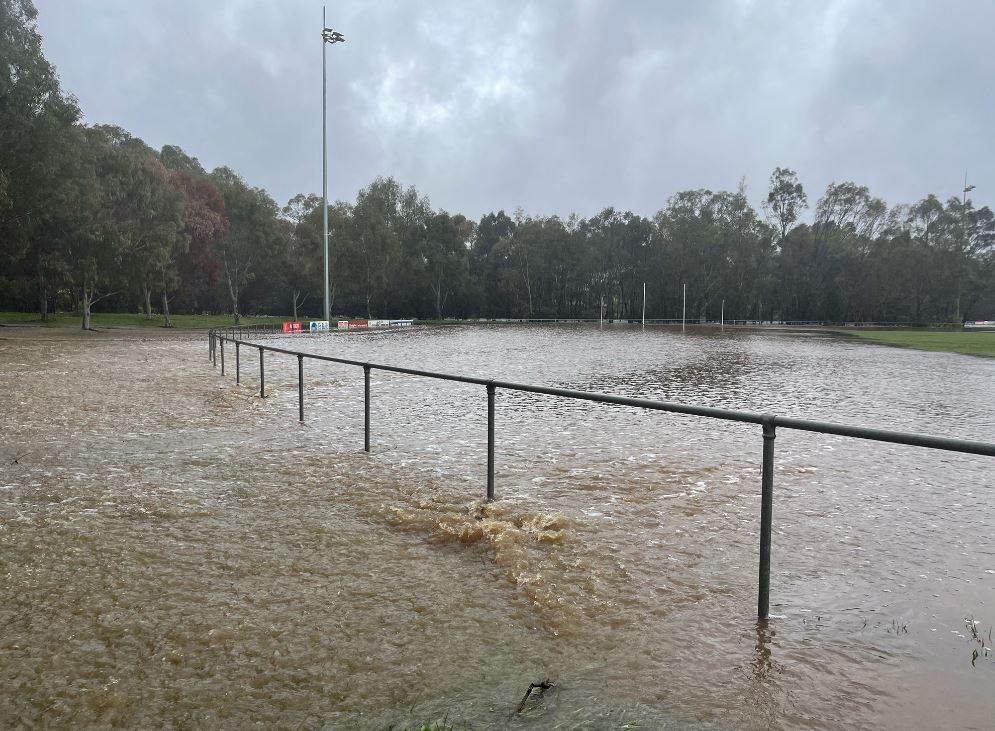 The Geelong, Ballarat and Gippsland lines were still operating but with buses replacing trains in some parts.

"We apologise to passengers impacted and appreciate their patience as we work through this significant weather event," the company said.

Almost 10,000 homes and businesses near Castlemaine, about 100 kilometres north-west of Melbourne, lost power on Thursday night when the substation flooded.

Powercor said it "de-energised" the substation when sandbags, pumping and moving equipment to higher ground proved not to be enough to keep the control room from flooding.

One resident on social media said they'd been told the power wouldn't come back on until Friday evening but the Powercor website was no longer showing an outage in the area early on Friday morning.

More than 40 schools were closed across the state and dozens were set to shut their doors on Friday, predominantly in the north-east and north-west.