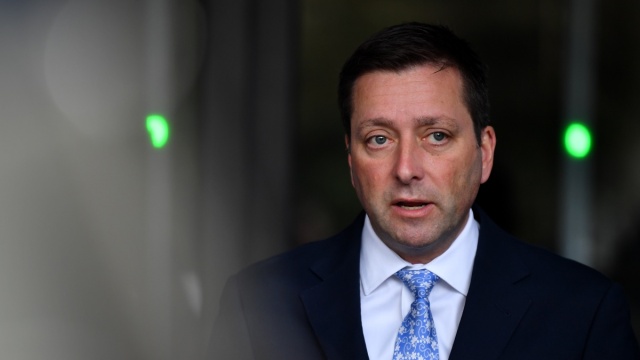 Victoria’s opposition leader is refusing to release correspondence about an attempted “deal” for his chief of staff to collect more than $100,000 from a Liberal donor.

The state’s electoral commission, police and corruption watchdog have all been asked by Labor to investigate after Matthew Guy’s chief of staff Mitch Catlin requested the donor make the payments to his business.

Mr Guy insists the contract, sent to wealthy past donor and billionaire businessman Jonathan Munz, was not signed or agreed to, despite reports of an email from Mr Catlin sent to his personal account reading “as per the original email agreement between you and me”.

Nevertheless, Mr Catlin stood down with hours of it coming to light.

Invoking an excuse he has previously criticised the Labor government for using during its own integrity scandals, Mr Guy said he could not comment because authorities had been asked to investigate.

“I can’t run a running commentary on a matter that they have sent off to every investigative body in this state bar the AFL tribunal,” he told reporters on Thursday.

Mr Guy reiterated the unrealised proposal was not an attempt to dodge donation laws and Mr Catlin stood down to keep the “perception” of integrity within the party intact.

The Victorian Liberal leader outright rejected that Mr Catlin signed any deals with other donors or that he forwarded the contract to Mr Munz from his personal email, as requested.

But he declined to release all correspondence between him and Mr Catlin in the lead-up to his hiring in September last year, to back up his claims.

“Why would I put that to you to be a value judgment when the Labor Party has referred it off to everyone under the sun.”

In May, Mr Guy said Victorians had a right to know when Premier Daniel Andrews refused to confirm if he had been interviewed as part of an ongoing IBAC probe into allegations of corruption at Casey City Council.

Asked whether it was hypocritical of Mr Guy to use the cover of a potential investigation to dodge questions, Premier Daniel Andrews said he wasn’t focused on the “many questions” his opponent is yet to answer.

“That is entirely a matter for him.”

Under Victorian law, political donations above $1050 must be disclosed and are capped at $4210 over four years for individuals and organisations.

The Victorian Electoral Commission has initiated preliminary inquiries into the allegations, saying it takes regulation of political donations very seriously.

Victoria Police and the Independent Broad-based Anti-corruption Commission have confirmed they received Labor’s referral and are assessing it.

It is understood the Victorian Ombudsman cannot launch an investigation into the case unless a referral is made through a parliamentary motion.

Mr Guy said his new chief of staff would start soon and immediately begin working on a code of conduct for opposition staff.