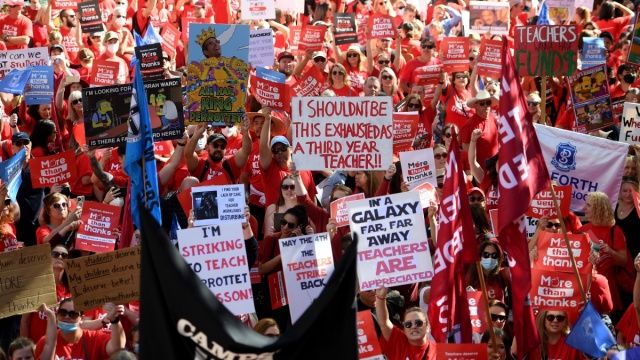 The NSW Teachers Federation has been fined $60,000 over strikes which “plainly and deliberately” breached orders banning industrial action.

The Industrial Relations Commission on November 29, 2021 restrained the federation and its members from taking action.

At the time, it was expected it would hear an application for a new award for teachers and related staff in early May 2022.

In the NSW Supreme Court on Thursday, Justice Christine Adamson fined the federation $60,000 after finding the orders were breached on nine days between April 26 and May 26.

This included a 24-hour strike and multiple rallies across NSW on May 4 as part of its “More than Thanks” campaign for better wages and working conditions.

The Department of Education, which brought the action, contended the maximum penalty applicable was $540,000 arguing the breaches were for a continuous period.

But the federation, which admitted the breaches, submitted the maximum penalty was $100,000 relating to nine separate days.

“I am bound by the terms of the Act, which permits dispute orders to be made which prohibit industrial action, including strikes,” she said.

“The dispute orders in the present case prohibited strike action.

“They were plainly and deliberately breached.”

She accepted the prosecutor’s submission that the federation has expressed neither remorse nor contrition.

But she found the motivation of the federation and its members – to advance its concerns – to be part of the circumstances surrounding the contravening conduct.

“The scheme of the Act is, however, designed to encourage employers, such as the Department, and employee organisations, such as the Federation, to resolve their disputes by conciliation and arbitration rather than by industrial action in breach of dispute orders.”

The present breaches were “inimical to the orderly conduct of the conciliation and arbitration system established by the Act”.