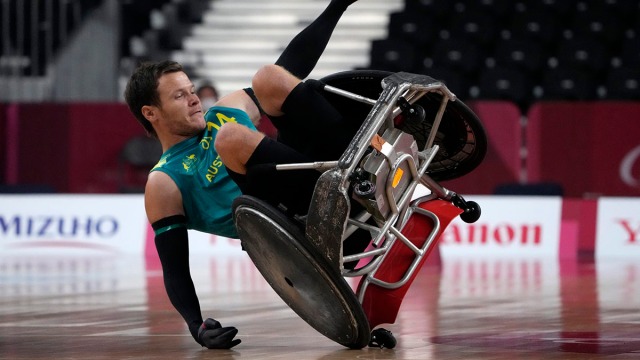 The unbeaten Australian Steelers face a blockbuster clash with Japan on Friday to decide top spot in group B at the world wheelchair rugby championship in Vejle, Denmark.

The Aussies are already assured of advancing to the knockout stage after thumping Colombia 54-42 on Thursday, following other commanding victories over Brazil, Canada and Denmark this week.

Steelers star Andrew Edmondson said the performance showed the Australians were building nicely for the matches ahead.

They are out to prove a point to rivals after their nine-year reign as Paralympic champions ended when they missed out on a medal in Tokyo last year.

A big thank you to members of the Australian Embassy who travelled over from Copenhagen to cheer on the Aussie Steelers in their clash with Denmark.

“We worked on a lot of things in that game. Thankfully we got a good lead and got the opportunity to give some of our guys a rest, so bring on the next game,” Edmondson said.

“We’re just getting started. We’re doing well but I think maybe some teams have forgotten about how good we can be.

“We definitely haven’t, that’s why we’re here and we really building something.

“People have written us off, so if anything, that just motivates us. We have heard that noise over the past couple of years, but we’re back, we’re working well together so bring it on.”