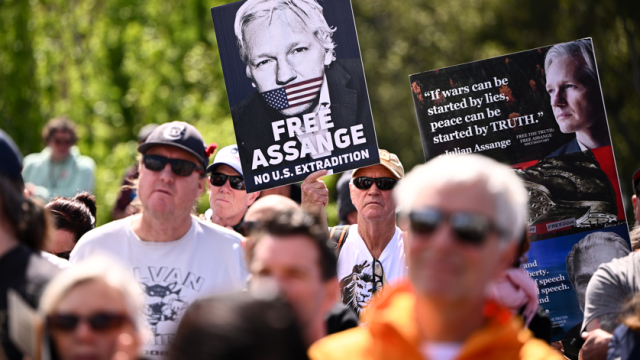 Thousands have marched through the Melbourne’s CBD calling for the release of WikiLeaks founder Julian Assange.

The 51-year-old Australian has been in London’s Belmarsh prison since he was removed from the Ecuadorian embassy in 2019.

Assange is fighting a long-running legal battle to avoid extradition to the United States, where he is wanted for espionage offences.

Melbourne protesters marched through the city streets and formed a human chain across a Southbank bridge on Saturday morning as they called on the Australian government to intervene.

“There’s an expectation in the electorate that the Prime Minister and this government is going to get Julian out of jail,” Assange’s brother Gabriel Shipton told AAP.

“The Prime Minister’s statements before the election – enough is enough, he doesn’t see what purpose is served by Julian being kept in prison – those were seen as a commitment.

“It’s been so many days of this government and Julian is still rotting in that prison.”

“They can pick up the phone, call Joe Biden and say, hasn’t Julian suffered enough? Drop the charges and extradition,” he said.

In August, lawyers for Assange filed an appeal against his extradition to the US, arguing he is being prosecuted and punished for his political opinions.

Assange was charged by the US with 17 counts of espionage and one charge of computer misuse after WikiLeaks published thousands of leaked military and diplomatic documents.

Melbourne’s demonstration against Assange’s detention was one of many being held across the world on Saturday.

It was heartening to see such global solidarity for Assange’s cause, Mr Shipton said.

“The movement is growing around the world as evidenced by these protests,” he said.

The post Thousands rally in Melbourne to demand Julian Assange be returned to Australia appeared first on The New Daily.