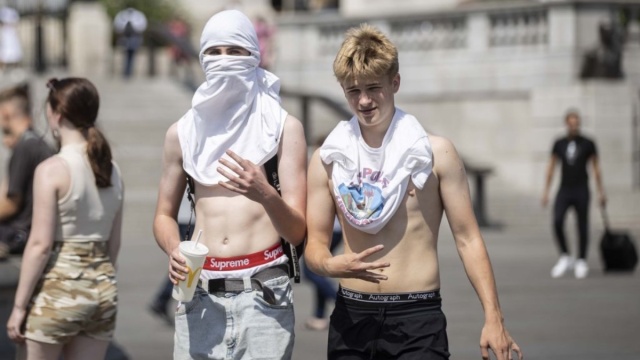 A severe heatwave in Western Europe is shattering temperature records – including in the United Kingdom, where temperatures exceeded 40 degrees Celsius on Tuesday for the first time on record.

The village of Coningsby in eastern England reached 40.3 degrees – provisionally the hottest temperature in UK history.

The record was previously held by Cambridge, which reached 38.7 degrees in 2019.

I’m a scientist interested in climate change and extreme weather. I grew up in the UK and remember major heatwaves in 2003 and 2006 during my school holidays.

Summer heat may be far from people’s minds here in Australia. But Europe’s ordeal is yet another sign that changes in Earth’s climate have already reached dangerous levels.

If the UK can reach 40 degrees, Australia must brace for even deadlier temperatures.

Europe’s heatwave spread across Spain, Portugal and southern and western France, before a strong southerly wind fanned continental air across the English Channel.

Background warming due to climate change boosts the odds of such severe heat.

In 2020, a UK Met Office study found under the current climate, there was likely a less than 1 per cent chance of seeing 40 degrees anywhere in the UK in a given year. Without human-caused climate change it would be virtually impossible.

The UK is simply not used to heat on this scale. In fact, buildings there are generally designed to retain heat rather than cool down.

A report last year found fewer than 5 per cent of homes were air-conditioned.

Urban green space in the UK, which can help cool cities, has also declined in recent years.

The Met Office on Friday issued the first ever “red warning” heat alert, which said “illness and death may occur among the fit and healthy, and not just in high-risk groups”. It advised people to:

Close curtains on rooms that face the sun to keep indoor spaces cooler and remember it may be cooler outdoors than indoors. Drink plenty of fluids and avoid excess alcohol, dress appropriately for the weather and slow down when it is hot. Be on the lookout for signs of heat-related illness. Cool your skin with water, slow down and drink water.

The death toll from the current heatwave is not yet known, but experts say it could be in the thousands across Europe.

But not all Britons see the extreme heat as a potentially lethal event.

One Conservative MP went so far as to accuse those taking precautions against the heat of being “cowards” and “snowflakes”.

And media reports have routinely featured images of people sunbathing on beaches and eating ice-cream in parks. Research shows this may create a false impression that spending time in the sun during heatwaves is safe.

Australia has, of course, experienced many days with temperatures of 40 degrees or more. But we struggle when it persists for several days.

Research shows the impacts of climate change are accelerating rapidly across ecosystems, food production, cities and towns, and health and wellbeing.

Heatwaves kill more Australians than any other extreme weather event.

Hospitals are strained as admissions rise. Public transport can be disrupted, energy supplies come under pressure, and the bushfire risk increases.

In January this year, temperatures in the Western Australian town of Onslow peaked at 50.7 degrees – equalling the Australian record.

Globally, the number of days over 50 degrees has doubled since the 1980s. Such temperatures are still rare in Australia. But as climate change worsens, more extremely hot days will occur across the continent.

Australia has warmed by about 1.4 degrees since 1910, well ahead of the global average of 1.1 degrees. Even if warming is kept below 2 degrees, Sydney and Melbourne are expected to see 50-degree days in coming years.

In the summer of 2019-20 the Western Sydney suburb of Penrith came close, reaching 48.9 degrees.

No time to waste

Greenhouse gas emissions have warmed the world, including Western Europe.

This raises the likelihood of more extreme high temperatures, including records broken by wide margins.

The UK heatwave is just the latest reminder of what’s in store for Australia and the world as the climate changes.

Last year, a severe heatwave in western North America led to temperatures approaching 50 degrees in Canada and broke records in parts of the Pacific Northwest.

This is especially important in Australia, the driest inhabited continent on Earth. Here, drought and severe fire conditions can exacerbate the harms caused by extreme heat.

The UK government is under fire for ignoring previous expert calls to create a national heat risk strategy. Australia must also do a better job on heatwave planning.

Until we reach net-zero greenhouse gas emissions globally, the planet will continue to warm.

We have the time and tools to avert an even worse planetary catastrophe, but we must act now.

The post The UK hit 40 degrees for first time. It’s a stark reminder of the deadly heat awaiting Australia appeared first on The New Daily.