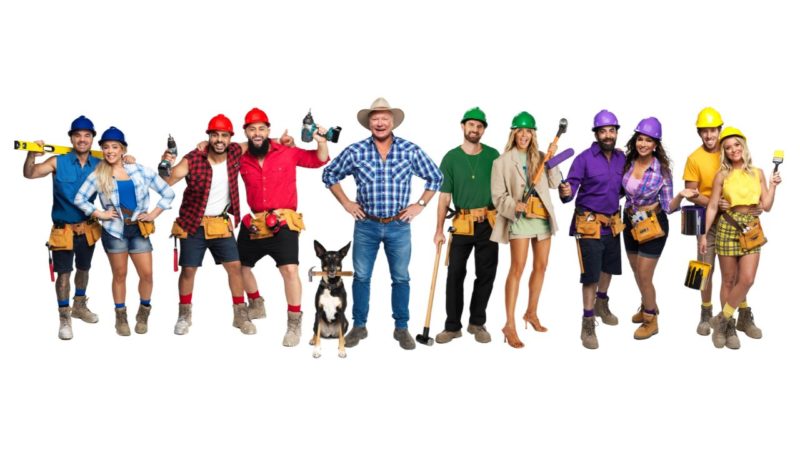 Nine’s director of content partnerships and client experience, Sarah Stewart, tells Mumbrella the reason brands stay with the show each season is because The Block delivers year-on-year for its clients.

“It’s all about finding what the brands’ messages are, and working out how we can create bespoke integration for them that works for both the show and the brand that we’re working with,” says Stewart.

This Sunday, The Block is back on Nine and 9 Now, swapping the city for the countryside and on a scale never attempted before anywhere in the world.

Coming of age for its 18th season, The Block: Tree Change heads to Gisborne South in Victoria’s beautiful Macedon Ranges, where five cities slicker couples will each build a 500-square metre house, tennis courts, wineries, and even a lake on 10 acres of rural real estate.

The houses in Tree Change will have a seven-star energy rating and be built to design specifications that have sustainability and resilience in mind.

Nine’s The Block executive producer and creator, Julian Cress tells Mumbrella, that due to the tree change, this season has meant they have been able to work with a vast array of new sponsors.

“One of the first phone calls I made what to Kubota because there was just no way of doing the show without them. Suddenly we needed farm machinery and we’ve never needed that before,” says Cress. “We also brought in James Hardy, who supplied us with building products and has really saved us in terms of supply chain issues.”

“We’ve also been able to upsize the role of some of our major partners who we have worked with for many years,” he adds. “Ford, for instance, who this year was supplying Ford Rangers, who were properly doing the work that they were designed for, which is a win, win. We get what we need to make the show, the audience gets to see how these vehicles are doing what they’re designed to do, and I believe that it will translate into many more sales of next-generation Ford Rangers.” Cress notes the team worked very closely with a significant number of 86 clients in this series of The Block which is a record for the program.

“We also chose them carefully to ensure that the integration is seamless within the program. We work with clients whose products we believe are the best of the best. We couldn’t make the show without the clients that support us, but we wouldn’t want to,” admits Cress.

Stewart did, however, expand on Cress’ comment, clarifying: “What I think Julian is doing there is talking about brands that he’s also bringing on for incidental exposure as well as what the Nine sales team is working through from a sponsor perspective, so a really elevated integration within the program,” she says.

“You’re looking more at 14 sponsors, which is still a large number. The scale and size of this season have lent themselves to integrating brands that may not have anywhere else to sit across our formats. But, then it also has a place for those bigger brands that could work on other formats but find the audience that they want in The Block.”

Stewart says out of these 14 sponsors, 11 of them have been on the series for more than three seasons.

“We have clients like Domain and McCafe which have been on for eight to 11 series. They’re clearly seeing results in the format and they continue to come back year after yeast knowing what we can deliver for them,” says Stewart. “We have Doman, which is a really natural integration within the show now that the show went rural this time around. Domain is able to provide the couples with information about the area and what they can expect from a sales point of view and what they should include in their homes.

“We also have Ford, this year, the company is really pushing the Ranger and The Everest. This year, The Block positioning is the ultimate background for them being tree change, very natural environment, getting the cars dirty, long road trips, and again a natural integration within the show.”

Moreover, other brands like BlueScope Steel, Mitre 10, Suncorp, and HiPages have all been naturally integrated within the season and have partnered with the show for a number of seasons, while new partners have jumped on board due to the rural and sustainable nature of this year’s season.

“BlueScope Steel, helped us bring these homes from all parts of Australia. The company has been with us for a number of years now working with TrueCore and Colorbond, says Stewart. “HiPages have been with us for four seasons. It’s such a great integration for them, it was a difficult series to film in relation to the pandemic, so we were really able to lean into our relationship with them to bring the right tradies into the fold within the series.”

She adds: “It’s the same with Mitre 10. Leaning on that relationship to ensure when things are out of stock they’ve been able to come and help us so we can deliver the series.

“Suncorp has been with us for about five years now, and we’re really pushing their partnership more into more of an insurance place here. They have helped create a pool of money that the contestants can access when they pitch their idea, and the idea has to use resilient measures to protect their property. Eg exterior cladding or dual water system, construction materials, anything that’s sustainable, and that will give them the opportunity to bring that to life as a result of Suncorp.” As for what audience this season is set to attract, Cress adds: “The demo that we pursue is the 25s-54s demo, with a female skew, but having said that, I have seven and nine-year-olds and we also consciously do a lot to appeal to them, because I can tell you I know in my house our kids are certainly in charge of the remote before they go to bed and I think that’s true with a lot of Australian families.

He notes the production team has had a lot of feedback from viewers that The Block is the one show they can sit down with their entire family and watch together, and there is something for everyone.

“Adults acting like idiots is something kids really like watching,” says Cress. “So therefore we do explore the drama a bit, and the ups and downs of going through a renovation because that appeals to the younger demographic, so that helps us maintain our core success, which is appealing to whole families. This year, though, we are making sure that we are including enough to appeal to those viewers who are particularly interested in design and renovation and see the room properly come to life.”

This year’s series has had a strong focus on sustainability, with Cress admitting a show like The Block has a responsibility in that discussion.

“I think that we, as a society, are at a critical moment in history where if we don’t fully grasp and execute sustainability in all facets of our life then we will be quite literally giving up on the generation to come,” he says. “So, implemented as many sustainability methodologies as we could find throughout the entire process of design and construction, and building of these homes.”

“This meant we were able to bring in new clients, like Red Earth Energy, who provided 50-kilowatt solar farms for each property, and 100 kilowatts of battery storage for each property so that the energy could be properly harnessed. We also worked with Rinnai, who is pioneering geothermal heating and cooling in Australia, which meant we were drilling down 100 metres into the bedrock to provide airconditioning and hot water systems that use 80% less energy to operate.

“We also 3D printed the first building in the Southern Hemisphere, which I think the audience will marvel at, but importantly, I think it’s the future of building in this country because it creates zero waste and the product is fully sustainable. We printed an entire building in 28 hours, and a building that would have taken three months to build previously.”

The post The Block’s EP and Nine’s Sarah Stewart on why the show delivers for its clients appeared first on Mumbrella.