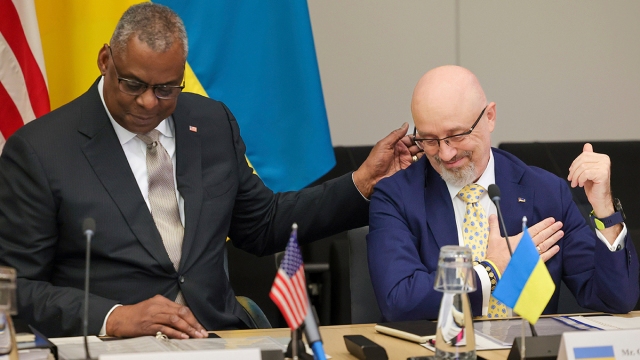 More than 50 countries have met to promise more weapons for Ukraine, focusing on its need for air defences after Russia launched its most intense missile strikes since the start of the war.

Opening the meeting of the Ukraine Defence Contact Group at the headquarters of NATO in Brussels, US Defence Secretary Lloyd Austin said Russia’s huge wave of missile attacks this week had laid bare the “malice and cruelty” of its war.

Ukraine had shifted the momentum in the conflict since September with “extraordinary” gains but would need more help to keep fighting, he said.

“These victories belong to Ukraine’s brave soldiers. But the Contact Group’s security assistance, training and sustainment efforts have been vital,” Austin said.

Russian attacks using more than 100 missiles have killed at least 26 people across Ukraine since Monday, when President Vladimir Putin ordered what he called retaliatory strikes against Ukraine for an explosion on a bridge.

Air raid sirens sounded across swaths of Ukraine for a third day on Wednesday and there were reports of some shelling but no sign of a repeat of the intensive countrywide strikes of the previous two days.

The missiles have mostly targeted civilian electricity and heating infrastructure while some hit busy roads, parks and tourist sites, including in the centre of Kyiv.

EU energy ministers were also meeting in Prague to work out ways to cope with an energy crisis caused by the war.

On Wednesday, Polish pipeline operator PERN said it had detected a leak in one pipe in the Druzhba system that carries oil from Russia to Europe although it said the cause was probably an accident.

Global attention has been focused on the security of Russian energy pipelines to Europe since the main undersea gas pipelines were damaged by suspected sabotage last month.

The US and its European allies have not said who they blame for huge explosions that blew holes in the two Nord Stream 1 pipelines and one of two pipes that make up the new Nord Stream 2 project but have implied they believe it was Russia.

Putin said on Wednesday gas could now be delivered through the remaining undamaged Nord Stream 2 pipe but it was up to Europe to allow it.

The new pipeline, completed but never opened, has been suspended by Germany since the invasion.

As his forces have lost ground on the battlefield since September, Putin has escalated the conflict, ordering the call-up of hundreds of thousands of reservists, proclaiming the annexation of occupied Ukrainian territory and repeatedly threatening to use nuclear weapons to protect Russia.

US President Joe Biden said on Wednesday he doubted Mr Putin would use a nuclear weapon.

Mr Putin is a “rational actor who has miscalculated significantly,” Biden said in a CNN interview, saying he believed the Russian president wrongly expected his invading troops to be welcomed.

Asked how realistic he believed it would be for Mr Putin to use a tactical nuclear weapon, Mr Biden responded: “Well, I don’t think he will.”

NATO’s Mr Stoltenberg told reporters in Brussels on Tuesday the military alliance had not noticed any change in Russia’s nuclear posture.