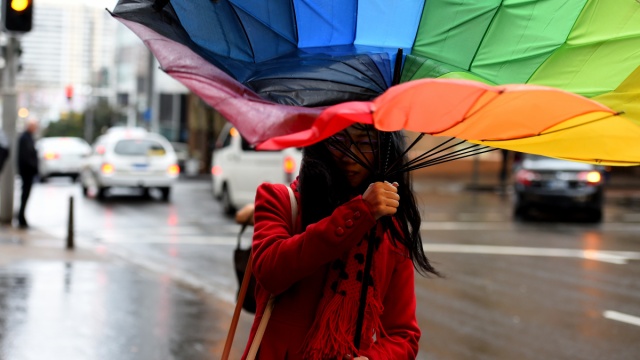 Five states and territories face another day of damaging winds and dangerous surf, with conditions are expected to worsen for millions of Australians.

Heavy rain and strong winds are expected on Thursday across much of the country’s south-east, including NSW, Victoria, Tasmania, the ACT and South Australia.

It is the latest in several days of wild weather in Victoria, southern NSW, the ACT and Tasmania.

Alpine regions are predicted to be hit hardest, with gale-force winds and thunderstorms on Thursday.

Early on Thursday, there were thunderstorms across much of inland NSW and the southern ranges, with the “unsettled weather due to complex low moving east across the Bight”, BoM reported, warning heavy rain and damaging winds were still possible.

The Snowy Mountains and the south-western slopes could cop six-hourly rainfall totals of up to 60 millimetres on Thursday, with localised falls of up to 100 millimetres possible.

There are also warnings of gale-force winds for the Illawarra and Batemans coast regions, with strong winds predicted to continue into Friday.

Damaging wind gusts of about 90km/hr are possible over the ranges west of the ACT, east to Bombala, south to Crookwell and north to Oberon, while winds of more than 125km/hr are likely in alpine areas above 1900 metres on Thursday.

In South Australia, Wednesday’s strong winds were expected to return on Thursday, with damaging winds across much of the state, including Adelaide.

The BoM said damaging winds were most likely on Thursday, with showers and thunderstorms expected to become widespread in southern SA.

Heavy rain is also forecast, including up to 60 millimetres in parts of the Lofty Ranges late on Thursday and early Friday.

This may result in a localised riverine or flash flood threat, the BoM warns.

Meanwhile, Victorians will get more thunderstorms on Thursday, with possibly “severe” activity in the north-east.

There is a minor flood warning for Seven and Castle creeks and a watch for minor to moderate flooding for north-east Victoria. Gale warnings remain for the west and central coasts and the central Gippsland coast areas until Friday.

There are also severe weather warnings for parts of east Gippsland and Victoria’s north-east forecast district.

“A complex low-pressure system moving across the Great Australian Bight and an associated trough and cold front are causing the potential for heavy rainfall today over NSW and adjacent parts of north-east Victoria,” the BoM said.

In Tasmania, there is a strong wind warning for much of the state on Thursday.