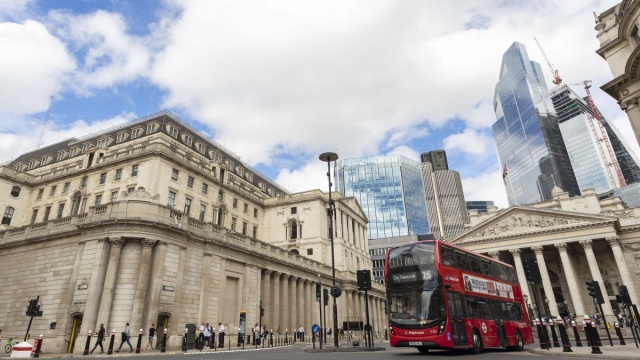 Sterling has fallen after the Bank of England followed its counterparts in the US and euro zone with a hefty hike in interest rates to quell inflation, saying Britain faces a lengthy recession.

As widely expected, the BoE increased rates by 50 basis points to 1.75 per cent on Thursday (Australian time).

It was its sixth increase since last December but the biggest since 1995.

The British economy would begin to shrink in the final quarter of 2022 and contract throughout next year, making it the longest recession since after the global financial crisis, the central bank said.

“The main surprise seems to be the somewhat downbeat economic forecasts that we have also been given, which are showing a recession expected in Q4 and lasting through 2023,” Stuart Cole, head macro economist at Equiti Capital, said.

“That is somewhat worse than what we had seen in May, where the outlook was for one or two difficult quarters of low or negative growth, and then a recovery.”

Sterling was down 0.2 per cent at $US1.2122 after being slightly firmer ahead of the BoE announcement.

S&P 500 futures were firmer ahead of Wall Street’s open and the latest jobless claims data, though Friday’s US non-farm payrolls will be more closely watched.

Stocks were steadier overall on Thursday, helped by strong earnings in Europe while Asian shares recovered some of Wednesday’s losses driven by tension over US Speaker Nancy Pelosi’s visit to Taiwan.

Shares in Hong Kong rose 2 per cent, tracking broader gains in Asia, reeling in some of the losses suffered after Sino-US frictions flared over Ms Pelosi’s visit to Taipei this week, which angered China.

Oil prices stabilised after hitting six-month lows, while the US dollar was underpinned by Federal Reserve officials pushing back against suggestions they will slow the pace of interest rate hikes, with one saying a 50 basis point hike would be “reasonable”.

A survey from the European Central Bank showed consumers in the euro zone are bracing for the economy to shrink and for high inflation to continue.

Kasper Elmgreen, head of equities at asset manager Amundi, said the illusion that decades-high inflation would be transitory was now firmly gone as fuel bills surge and companies have difficulties finding staff.

“The big picture here is that it’s going to require quite a lot to restore price stability,” he said.

“The risk here is that we underestimate how powerful a force it is we are dealing with.”

The second quarter earnings season underway has not provided a major “reset” to what Mr Elmgreen saw as still too high earnings expectations for 2022 overall given the economy is slowing.

“That might come in the third or fourth quarter as we start to see more demand impact,” he said.

Fed officials have provided a hawkish chorus this week, battering the short end of the yield curve.

Two-year Treasury yields were trading at 3.0938 per cent, down slightly, while the benchmark 10-year year yields traded at 2.7209 per cent, also slightly weaker.

The US dollar has halted a decline that began in the middle of July, with support from rate hike expectations and heightened political tension.

Fed funds futures remain priced for rate cuts to be underway by the middle of next year and the inversion of the US yield curve, with 10-year yields below two-year yields, suggests investors think the hiking path will hurt growth.

Brent crude futures were slightly firmer at $US96.82 a barrel as supply concerns triggered a rebound from multi-month lows on Wednesday after US data signalled weak fuel demand.