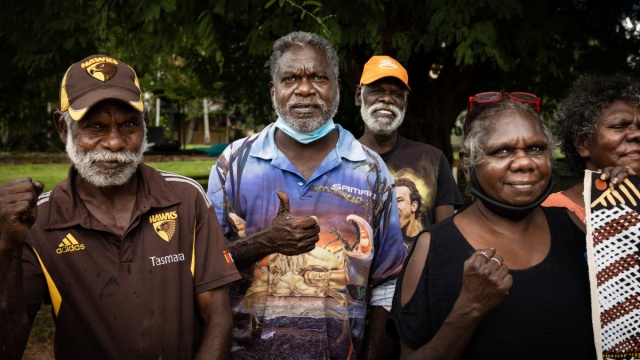 Traditional owners have given evidence to a bush court in song and dance in a bid to stop a massive Northern Territory offshore gas project.

Tiwi Islander Dennis Tipakalippa is challenging the approval of Santos’s environmental plans to drill in the Barossa gas field, about 150km north of his home of Pitjamirra on Melville Island.

The Munupi Elder, who is representing his clan, told the Federal Court hearing on Monday that he was not consulted over the plan for eight gas wells, and fears the project could damage his people’s sea-Country.

“No one came to see me face to face,” he said in the dirt floor court that had been set up beside a beach under a makeshift marquee for about 50 people.

He was backed by three other traditional owner witnesses, including Tiwi Island Regional Council Mayor Pirrawayingi Puruntatameri, who also said they had not been consulted about the drilling.

“Disrespect and the arrogance and ignorance of Santos not consulting the Manupi traditional owners,” Mr Puruntatameri said when asked to describe the situation.

“Very rude. It is absolutely devastating for our spiritual connection.”

Evidence was also given in the form of song and dance, with four Manupi men wearing traditional face paint and clothing performing in the middle of the court.

It was followed by a woman and three girls dancing as the community members, who were gathered around the court tent, clapped and sang with them.

The Manupi clan also submitted into evidence a large painting of the sacred sea life said to be at risk from the gas development.

Tomorrow the Federal Court will travel to the Tiwi Islands to hear On Country evidence from Traditional Owners about Santos’ failure to consult them adequately about their offshore Barossa gas project.

The judicial review of the National Offshore Petroleum Safety and Environmental Management Authority’s decision heard they were connected to the land and sea by songlines and totems, and feared the project could damage the environment, which would in turn impact their way of life and spiritual wellbeing.

“We have for centuries, for so long, survived and lived alongside the sea and the environment, it integral part of our culture,” said Mr Puruntatameri, who was also wearing facing paint and traditional clothing.

The historic hearing, which is the first of its kind, started with a smoking ceremony to welcome Judge Mordecai Bromberg and a dozen lawyers from Santos, the Environmental Defenders Office and the federal government, who had flown to the island for the case.

They later joined traditional owners around a campfire in the baking Top End heat to eat damper and seafood, with Mr Tipakalippa cheekily announcing it had been caught in the pristine waters he was fighting to protect.

He was forced to agree late in the day under cross-examination from Santos lawyer Stephen Free SC that he had attended two Tiwi Island Land Council meetings where representatives from the project’s former owner, US oil and gas giant ConocoPhillips, provided updates about the project.

“I will be honest I cannot even remember,” he said when presented with the minutes from the 2017 and 2019 meetings that showed he had been present.

“If I was aware I would have told my Manupi clan group.”

Santos, Australia’s second-largest independent gas producer, has previously said it would “vigorously defend” the Barossa project, and that it had all necessary approvals following consultation with stakeholders.

The $US3.6 billion offshore natural gas development is expected to create up to 600 jobs and will pipe gas 280km to the Darwin LNG facility, with first production expected in 2025.

The company says the project, which it purchased from ConocoPhillips in 2020, is 43 per cent complete and on schedule. The drilling that is the subject of the court case started in July.

NOPSEMA, who was represented by lawyers from the Australian Government Solicitor’s office, accepted the project’s environmental plan and approved the drilling activities in March, saying it was satisfied the project had complied with the regulations.

The Tiwi Islands are 85km north of Darwin.

The post Song and dance in bush court over Santos appeared first on The New Daily.