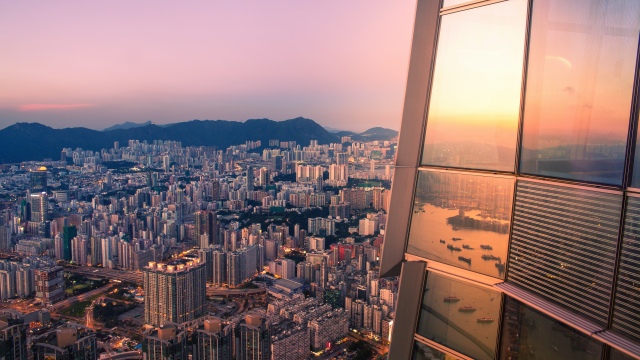 Australia has signed up to the challenge of reaching net-zero emissions by 2050, and to achieve that we will need to do a whole range of things differently.

Many people think of massive wind farms or electric vehicles when it comes to achieving net zero.

But technologies, not yet widely known, will be equally important as tools for change.

Sydney and Melbourne are signatories to a net-zero building initiative by 2050; ClearVue is a company with technologies to help reach those targets.

“Think of a double- or triple-glazed piece of glass with a film between the glass sheets which is a nano technology interlayer,” said Earle Harper, head of investor relations at ClearVue.

“When the sun hits, the interlayer identifies UV [ultraviolet] and IR [infared] light which is deflected to the side of the window where it is collected by solar cells,” Mr Harper said.

The technology can produce 25 to 30 watts of electricity per square metre.

That level of power harvest “is not going to replace a solar farm to run the building,” Mr Harper said.

However, it does produce a two-fold benefit.

First, it “provides insulation to keep buildings cool during the summer and warm in the winter,” he said.

Second, the power produced can help heat and cool the building along with other tasks.

ClearVue’s technology can produce energy savings of up to 40 per cent, compared to typical single-pane glass construction.

“Having the ability to create electricity on site means you take in less power from outside and that pushes the building down the cost curve from the point of view of owners and investors,” Mr Harper said.

Not only does ClearVue technology allow for reduced energy costs through generation from windows, the patented nano and micro technology film lasts for about 20 years.

Building costs are further reduced because less infrastructure is needed to connect to the power grid.

There are also financial benefits.

“All the empirical data around the world suggests that if you own a green building that meets all environmental criteria for net zero you can command a higher rental premium,” Mr Harper said.

Eventually, it will be available for domestic use and public buildings, such as bus shelters.

The technology was developed by Edith Cowan University in Western Australia and the company, with a market capitalisation of $48.7 million, “is in the very early stages of commercialisation,” Mr Harper said.

It has been in existence 11 years and has raised about $8 million from investors.

At the other end of the net-zero technology world comes a Canberra-based start-up known as Goterra.

It uses proprietary technology to process food waste on site into stock feed and natural fertiliser.

Although those processes may not seem to aid net zero through production of green energy, unprocessed food waste produces 8 per cent of global carbon emissions.

The European Union and Canada are already cracking down on the amount of artificial nitrogen-based fertilisers used by farmers – making natural fertilisers sought after.

Olympia Yarger, founder and CEO of Goterra, originally trained in agriculture and took her knowledge to develop a proprietary technology robot that can be installed wherever food wastes are present or collected.

The robot – an automatically controlled device – houses the larvae of the black soldier fly, which eats the waste.

The larvae, once they have gorged on the food waste, then becomes a rich food source that can be fed to livestock.

Then the droppings of the larvae are turned into fertiliser that can be sold to farmers or gardeners.

The actual processing of the food waste delivers a benefit, but there is another driver behind the system.

“What we’ve done is find a way to create infrastructure capability that can be decentralised. We can actually manage any food waste  wherever it’s created and whatever the volume is,” Ms Yarger said.

That decentralised system means that collection systems for food waste processing – expensive in both dollars and carbon miles – can be avoided, making Goterra’s produce low emission.

The modular processing robots can be installed in a wide range of places like council waste collection centres, shopping centres or food production plants.

The machines “accept the food waste autonomously and process it ready to be fed to the insects,” Ms Yarger said.

Once the modular processors are in place then high-value, low-impact protein and fertiliser is produced in just 12 days.

“The industrial robot holds the insects in place, moves them from the racking to their feed and back down again,” Ms Yarger said.

Currently the insects, which are dried when the process ends, are sent to small agricultural holdings or pet food companies.

“I’m like a grain farmer at that point. I’ve harvested my grain, the maggots, into feed and sold it to people who need it to feed their animals,” Ms Yarger said.

Goterra is still at the venture capital stage.

Although there needs to be continued research spending, “as it stands we’re commercial and in the market delivering services”.

The post Smart Australian technologies that will help us reach net-zero emissions by 2050 appeared first on The New Daily.