Salman Rushdie: The chilling interview he gave just two weeks before being attacked in New York

Iran claims it has launched satellite carrier rocket into space 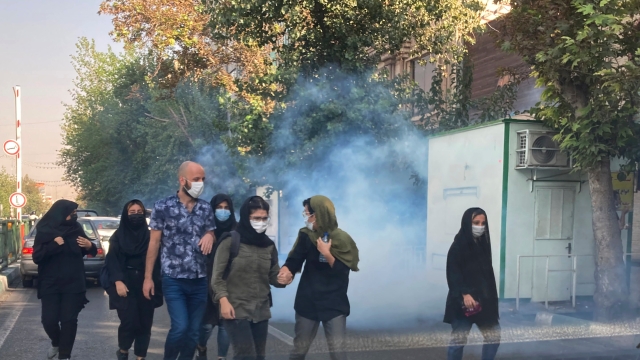 Seven people have been killed during protests in Kurdish regions of Iran overnight, a rights group says, as authorities pursue a deadly crackdown on demonstrations sparked by a woman’s death in the custody of morality police.

Nearly four weeks after Mahsa Amini, a 22-year-old Iranian Kurd, was detained in Tehran for “inappropriate attire”, the protests show no sign of abating in a bold challenge to Iran’s clerical rulers.

The protests have underlined pent-up frustrations over freedoms and rights in Iran, with many women joining in. The deaths of several teenaged girls reportedly killed while demonstrating have become a rallying cry for more protests.

While many officials have struck an uncompromising tone, a top advisor to Supreme Leader Ayatollah Ali Khamenei has been cited as questioning whether police should be enforcing headscarf-wearing – rare criticism of state efforts to impose the hijab.

Human rights groups have reported more than 200 killed in the crackdown on the protests, which have been particularly intense in Kurdish regions where security forces have put down unrest by the Kurdish minority in the past.

A source in Sanandaj, the provincial capital of Iranian Kurdistan, told Reuters that riot police were searching houses and arresting dozens of young people, describing the situation as very tense with hundreds of police officers on the city’s streets.

“We have information from Baneh and Saqez as well. They have arrested dozens of young people since yesterday, including teenagers,” added the source, who declined to be identified because of fears for their safety.

In the city of Kermanshah, direct fire from security forces killed two people, Hengaw said. It posted a picture of the body of an 18-year-old man it said was one of the dead.

A video posted on social media from Kermanshah late on Wednesday showed a fire burning in the road. “Kermanshah is hell, it’s war, it’s war,” a voice can be heard saying.

Three members of the security forces were also killed in Kermanshah and around 40 more injured, Hengaw said.

It said a fourth member of the security forces was killed in Mahabad, and firing by security forces killed another person in Sanandaj, Iranian Kurdistan’s provincial capital.

Officials have denied that security forces have fired on protesters, and have previously reported around 20 members of the security forces killed during the nationwide unrest.

During the protests, many women have been publicly removing, waving and burning the headscarves they are required to wear under Iran’s conservative dress codes.

Khamenei advisor Ali Larijani, a former parliament speaker, said “if 50 per cent of our country’s women do not practise wearing a full hijab, then the police should not be involved”.

“The question here is this: Should the government interfere in all matters such as this one?” he said in comments to Ettela’at daily.

Iran’s top judge said he had ordered tough sentences for the “main elements of riots”, a semi-official news agency reported.

“I have instructed our judges to avoid showing unnecessary sympathy … and issue tough sentences for them while separating the less guilty people,” Gholamhossein Mohseni Ejei was quoted as saying.

Rights groups estimated thousands of people have been arrested.

The post Seven die in latest scenes of unrest in Iran’s Kurdish zone appeared first on The New Daily.