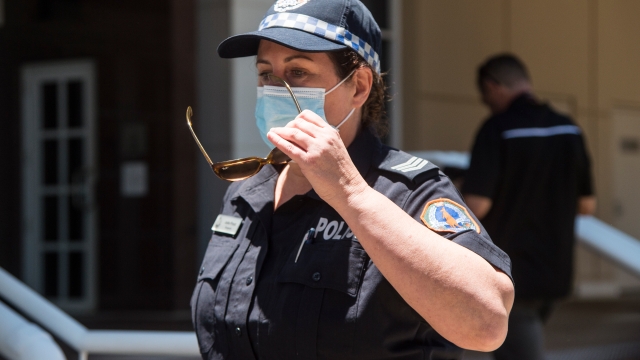 The senior officer in Yuendumu says she wouldn’t have called in a special police unit to help arrest an Indigenous teenager if she’d known some of its members held racist views towards Aborigines.

Giving evidence in the inquest into the death of Kumanjayi Walker, Sergeant Julie Frost, agreed language revealed in text messages, which referred to Indigenous Australians as “c–ns” and “neanderthals”, was both disgraceful and abhorrent.

The messages were retrieved from the phone of Constable Zachary Rolfe, who shot Mr Walker three times during an arrest attempt in Yuendumu in 2019.

Constable Rolfe was charged with murder over the incident but was acquitted after a Supreme Court trial.

He had been part of an Immediate Response Team that went to the remote community to detain the 19-year-old just days after he had fled from local police while brandishing an axe.

Sergeant Frost said she first heard of the texts when they were revealed to the inquiry last week and told coroner Elisabeth Armitage she was shocked by the language.

She said she would take action if she heard such views from junior officers.

“I would certainly pull them aside and counsel them about it and try to work out why they held those views and to tell them it has to stop,” she said.

Sergeant Frost agreed she would never have called in members of the IRT if she knew they held such derogatory opinions and would not have allowed them to assist in the arrest of Mr Walker.

In other evidence, she told the inquiry she “didn’t contemplate for a minute” that the operation to detain the Warlpiri man would result in a shooting, given the resources available.

She said after the incident she took the “tough” decision not to immediately tell the local community and the teenager’s family that he had been killed amid safety fears.

“Effectively it was made for the safety of the police and the community,” she said.

She was also involved in devising the plan to send an ambulance to the airport, along with police, to give the impression Mr Walker was still receiving medical treatment and to bring in reinforcements from Alice Springs.

Sergeant Frost said she understood the anger of the community for not being told the truth.

“I understand their anger. I really want to apologise to the community,” she said.

“Again, we had to make these decisions for the benefit of both the community and the police.”

But she rejected suggestions reported in local media that she had failed to provide proper first aid to Mr Walker and could have saved his life, but didn’t.

“Excellent first aid was being provided,” she said.

Sergeant Frost said the shooting was incredibly difficult and it was very hard to come to terms with what happened.

But she said criticism of her on social media had been “nothing short of devastating” and had resulted in a lot of “reputational damage”.

“The stuff that has been reported is factually incorrect. It’s biased, it’s nothing but self-serving propaganda,’ she said.

Sergeant Frost also indicated she would read a statement to Mr Walker’s family at the end of her evidence.

The inquest in Alice Springs is exploring 54 issues related to the life of Mr Walker and the actions of police before and after he was killed.

It will resume on Friday.