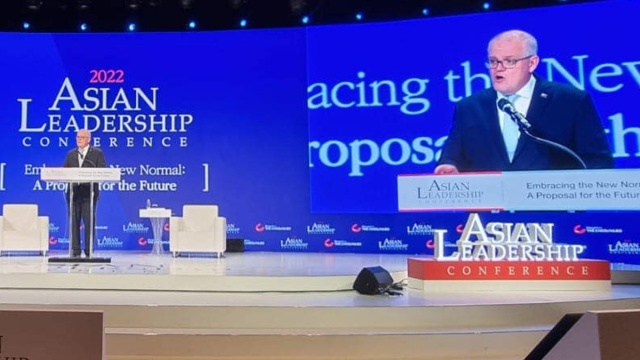 The former prime minister Scott Morrison has joined the board of an organisation described as aligning with the “intolerant far right”.

Mr Morrison’s register of interests was updated this week to reflect a new position on the board of the International Democrat Union (IDU).

The IDU was founded as an international alliance of political parties from the right to centre-right, but the former PM did not respond to questions about what many observers say is its increasing affiliation with populist, Christian anti-immigration parties on the far-right of European politics.

Doug Saunders, international affairs columnist for Canada’s largest newspaper, The Globe and Mail, said the IDU had “shifted to the intolerant far right” as it kept Fidesz, the party of Hungarian autocrat Viktor Orban, among its members.

The United States’ envoy against anti-Semitism recently denounced as “inexcusable” remarks by Mr Orban about the dangers of “peoples of mixed race”, which she described as evoking Nazi ideology.

After eight years, Mr Orban has remade Hungary into what he describes as an “illiberal” democracy focused on the perceived threats from rising immigration and flagging birthrates, something he has sought to address with baby bonus-like incentives for having four or more children.

In 2020 he addressed an audience, including Tony Abbott, and praised Australia for “the brave, direct and Anglo-Saxon consistency which it has shown on migration and defence of the Australian nation”.

Mr Orban is a proponent of the great replacement conspiracy which holds that people of European origin are being replaced by a wave of immigrants south of the continent.

“There is an alternative to liberal democracy: it is called Christian democracy,” he said recently.

“We must show that the liberal elite can be replaced with a Christian-democratic elite.

In 2020 Mr Orban and Mr Morrison discussed opportunities for responding to the economic challenges presented by COVID-19.

Mr Morrison was compared to the Hungarian leaders in a recent Financial Times editorial on the subject of the former’s power grab and secret assumption of cabinet portfolios. The newspaper said Mr Morrison served as a warning about a global trend toward creeping authoritarianism under the cover of COVID.

“[These] are questions not just for Morrison but also for Australia and other democracies around the world,” it wrote. “Hungary’s Viktor Orbán wasted no time during the pandemic to gain the right to rule by decree, with no time limit.”

The former PM has been appointed to the board of the IDU at the same time as another member of the European far-right with whom he solidified ties during COVID: The former chancellor and leader of the Austrian People’s Party, Sebastian Kurz.

Soon after COVID first emerged Mr Morrison, then riding high and having just closed national borders to China, was early to join the ‘First Movers Club’, a grouping of nations claiming success in having suppressed the spread of the virus spearheaded by Mr Kurz.

Mr Kurz governed in a coalition that included the neo-Nazi Freedom Party but was eventually felled by corruption allegations during his second stint in power.

“Kurz likes to call himself a bridge builder. But a bridge to what?” Florian Klenk, an Austrian newspaper editor said during an interview with Time Magazine. “Do we need a bridge to neofascists? I’m not so sure.”

Mr Morrison missed the first sitting of Parliament to give a speech sharply critical of China at a forum co-convened by the IDU.

Questions have lingered about the relationship between Mr Morrison – whose first foreign policy speech as PM echoed Donald Trump in denouncing “globalism” – and global right wing movements that have surged in popularity since 2016.

The IDU’s treasurer is Mike Roman, a former employee of the champions of the far right, the Koch brothers, who spent almost $900 million getting Donald Trump elected in the America’s 2016 presidential election.

Mr Roman led, it has been reported by Politico, the Koch organisation’s opposition research division, which focused on investigating those on the other side of politics, a task for which he was paid $286,000 ($425,000) in 2016.

Mr Orban was the first European head of government to endorse Trump’s presidential bid during the 2016 United States presidential election.

John Howard held the position of chair of the IDU for more than a decade, and first accepted it while serving as prime minister. His tenure ended in 2014.

In a sermon given in July Mr Morrison said those of his faith did not trust in governments or the United Nations.