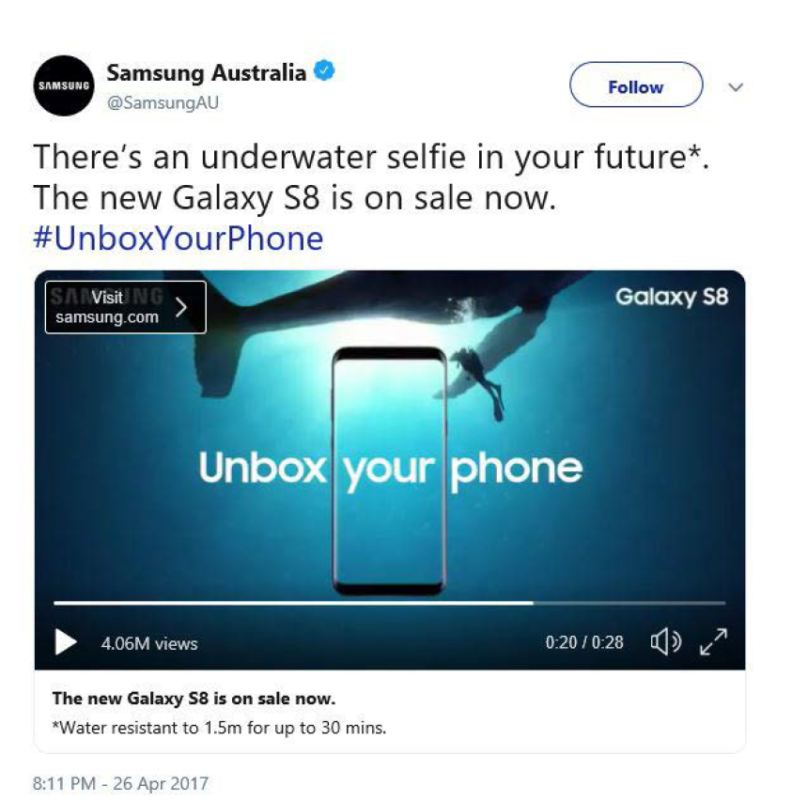 The judgment comes after the Australian Competition and Consumer Commission (ACCC) instituted proceedings against the company in 2019, alleging it made false, misleading and deceptive representations in advertising.

The campaign in question consists of nine ads across Facebook, Twitter, Instagram, website, and in-store, suggesting that the Galaxy phones were suitable to be used in pool and sea water. These ads were released between March 2016 and October 2018 for S7, S7 Edge, A5 (2017), A7 (2017), S8, S8 Plus and Note 8 Samsung Galaxy phones.

Samsung Australia has acknowledged that if the Galaxy phones were submerged in pool or sea water there was a material prospect the charging port would become corroded and stop working if the phone was charged while still wet.

Despite efforts from Samsung Electronics Co., Ltd. (SEC), Samsung Australia’s parent company, to mitigate the effects of this charging port corrosion prior to the launch of the Galaxy phones, the campaign demonstrates the usage of phones in the water when the material issue of corrosion was still present.

“Samsung Australia’s water resistance claims promoted an important selling point for these Galaxy phones. Many consumers who purchased a Galaxy phone may have been exposed to the misleading ads before they made their decision to purchase a new phone,” ACCC chair Gina Cass-Gottlieb said.

“This penalty is a strong reminder to businesses that all product claims must be substantiated. The ACCC will continue to take enforcement action against businesses that mislead consumers with claims about the nature or benefits of their products.”

The Federal Parliament has increased maximum financial penalties under the Australian Consumer Law in 2018, before which Samsung Australia conducted most of its contravening ads. Similar conduct under the new penalty regime could give rise to greater penalties.

Samsung Australia admitted it had contravened Australian Consumer Law and made joint submissions with the ACCC in respect of penalties and orders.