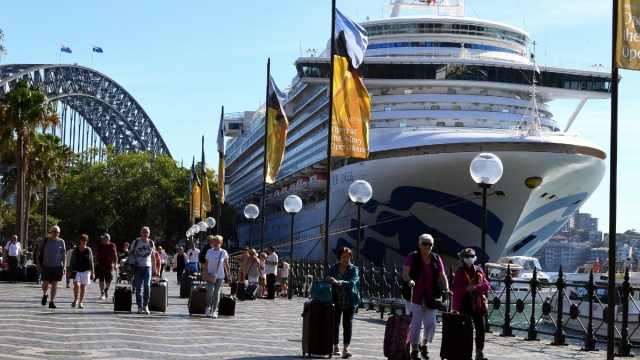 Who actually introduced COVID-19 onto the Ruby Princess has become a key sticking point in the class action over the outbreak that claimed 28 lives.

The companies operating the cruise have asked the plaintiff’s lawyers to prove where the outbreak came from – whether it was a passenger or a member of the crew.

David McLure SC, for Carnival and Princess Cruise Lines, said they disputed the allegation the primary source of the infection was a crew member.

The Ruby Princess sailed from Sydney Harbour for New Zealand on March 8, 2020, and returned 11 days later having cut the cruise short when Australia’s borders were closed in the early days of the pandemic.

In chaotic scenes on its arrival, coughing and spluttering passengers could be seen leaving the ship, desperate to get home.

It’s believed 663 of the 1679 Australians on board went on to develop COVID.

Mr McLure said the plaintiff’s case was the outbreak came from a crew member, held over from a previous Ruby Princess cruise that docked on the morning of March 8, in which several people were seen with COVID/flu-like symptoms.

But he said testing of those passengers did not reveal influenza or COVID, which he said the plaintiff incorrectly argued should be interpreted as COVID cases.

“The respondent’s experts say … there was a small, well-managed influenza outbreak,” he told the Federal Court on Thursday.

“That view is supported in part by the fact NSW Health undertook nine COVID swabs, all of which returned negative results.”

Ian Pike SC, for lead plaintiff Susan Karpik, said the cruise line’s demand at this late stage for the plaintiff to prove where the outbreak came from was too prejudicial.

The onus, he said, should not be on the plaintiff to prove how COVID got on the ship.

“It can’t be allowed to be introduced now,” he said. Otherwise, he would seek an adjournment to prepare.

Mrs Karpik, who alleges she and her husband of 50 years, Henry, caught COVID on the cruise, is suing the cruise line for damages.

She alleges the line failed in its duty to take reasonable care of the passengers.

Mrs Karpik had been on eight previous cruises, and Mr Pike said she signed up because she trusted the cruise line to look after her.

“Why did she go on the ninth? Because she thought it was safe,” he said.