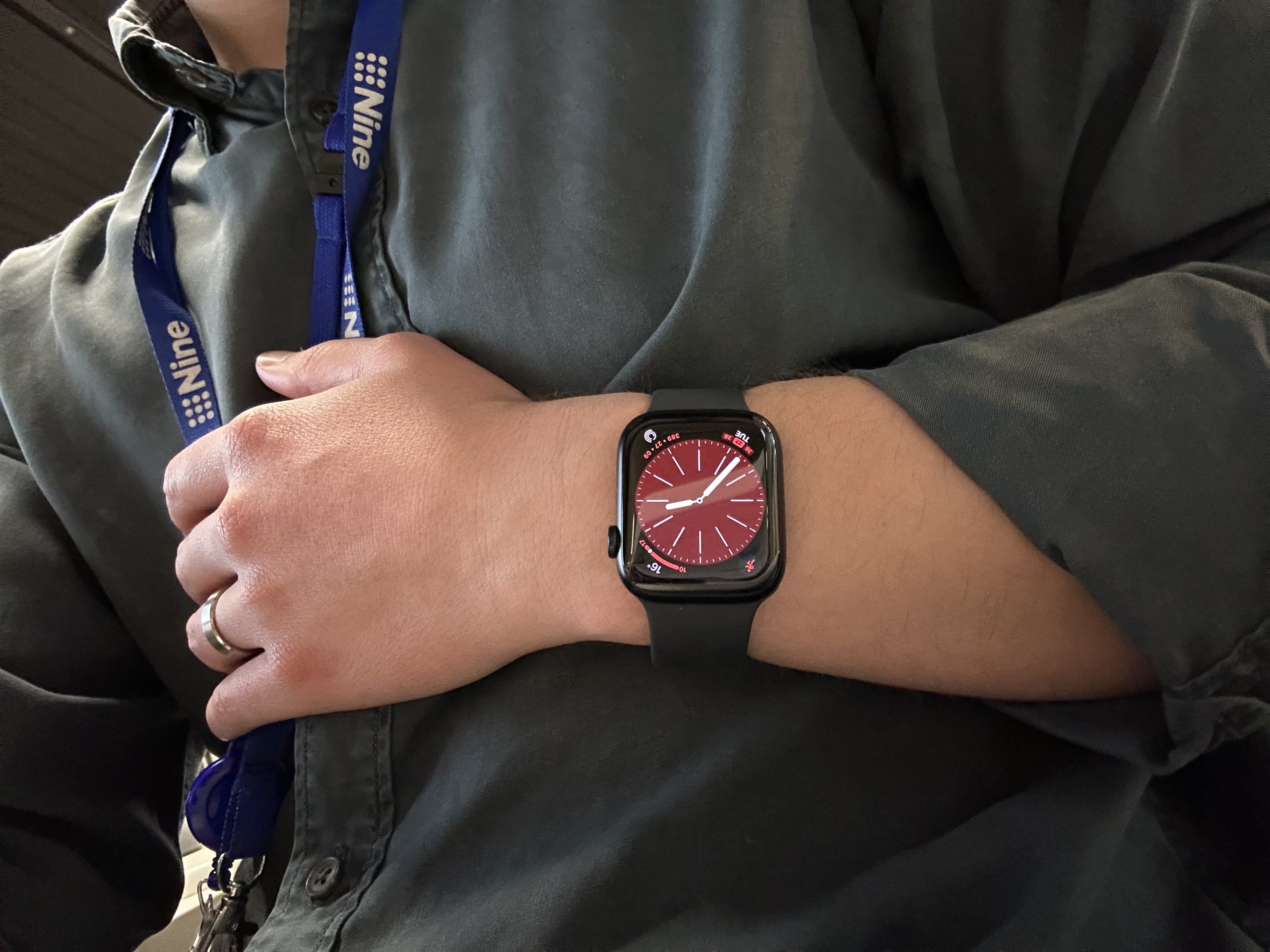 The Apple Watch headline of 2022 is the new Ultra, not the Series 8.

There are new colours, watch faces and bands, but the Series 8 really only brings two, exclusive new features to the table – temperature sensors that provide deeper insights into women's health and crash detection. ﻿

Like the iPhone 14, a new accelerometer and gyroscope allows the new Apple Watch Series 8 to detect a car accident – with the help of the sound of screeching metal.

The numbers are mind boggling. The accelerometer can record up to 256G and takes 3,000 readings per second.

If you have both, a notification will pop up on your wrist (Apple assumes it's closer to you if a smash sends your phone flying) and if it doesn't get a response, it will automatically call emergency services and repeatedly play a recording of your location.

It's a very cool feature that I (hopefully) won't be testing any time soon.

Apple has also upgraded and added a second temperature sensor to Watch Series 8.

One is placed just below the display, the other is closer to the wrist for more accurate body temperature readings. 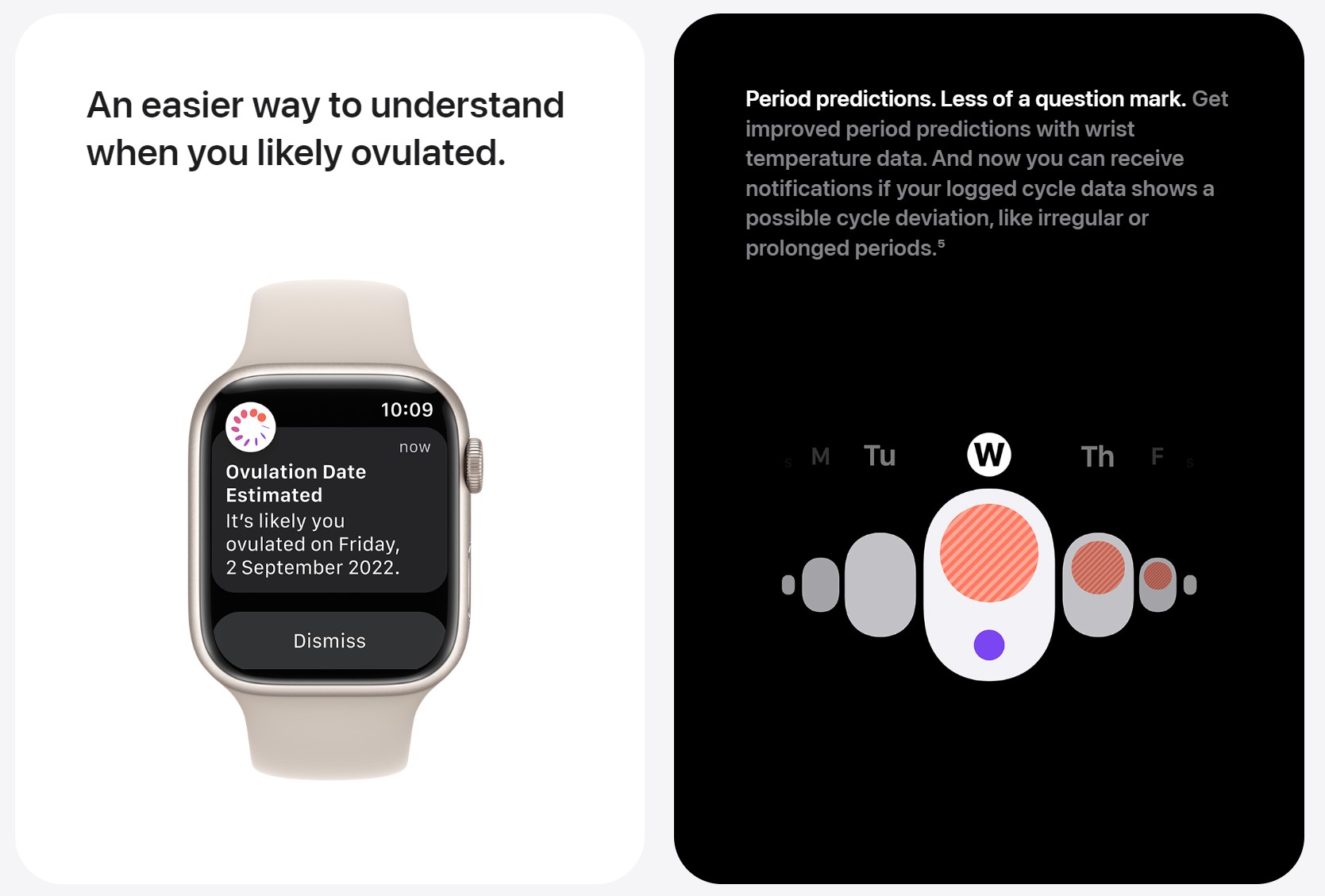 Using these, Apple's health app is able to analyse changes in a woman's basal temperature and retrospectively estimate they are ovulating and an ideal time to fall pregnant.

The sensors will take readings every five seconds but you'll have to wear the watch for at least five days to establish your body's baseline temperature before any analysis.

Critically, both of these new features are unaffected by Apple Watch's new low power mode.

The toggle – which appears on all watches compatible with Watch OS9 – automatically switches off some features and limits others. 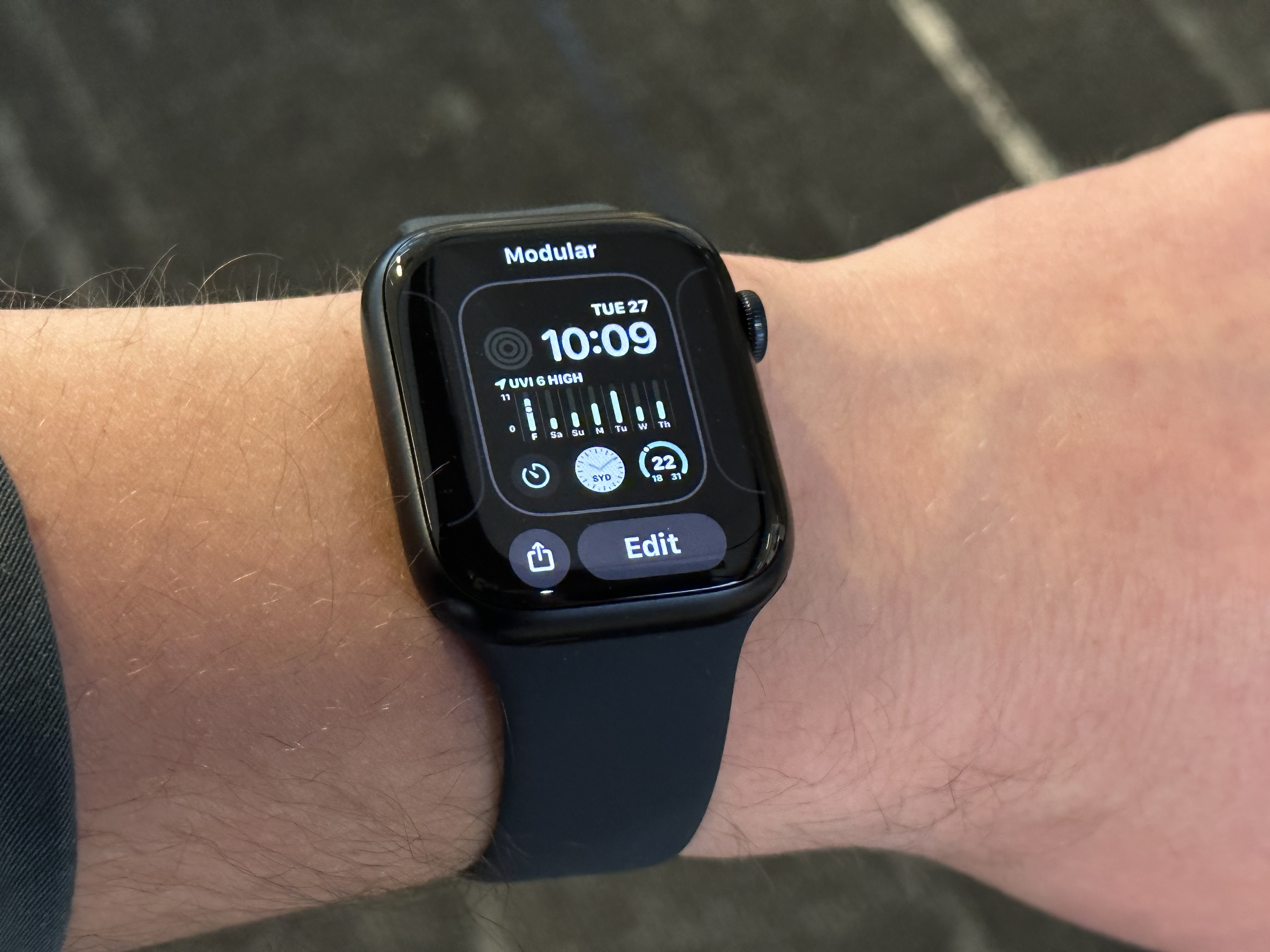 For example, the always on display turns off, as will background heart rate and oxygen measurements which are needed to pick up irregular rhythms.

It will also slow down Siri, the refresh rates of apps running in the background, animations and scrolling aren't as smooth and complication updates are also affected.

With low power mode on, it's said you can squeeze up to 30 hours out of the Series 8.

The new software also improves the options you have in the sleep, medication and workout apps.

Apple has just added a new history option for those diagnosed with atrial fibrillation for users to track how factors like exercise, sleep and even your weight affects readings.

Apple recently removed the need to own an Apple Watch just to subscribe, and has now unlocked the ability for your workout metrics to be displayed on your TV using AirPlay.

This is a big win for anyone who doesn't want to drag their Apple TV around with them just to complete a workout. 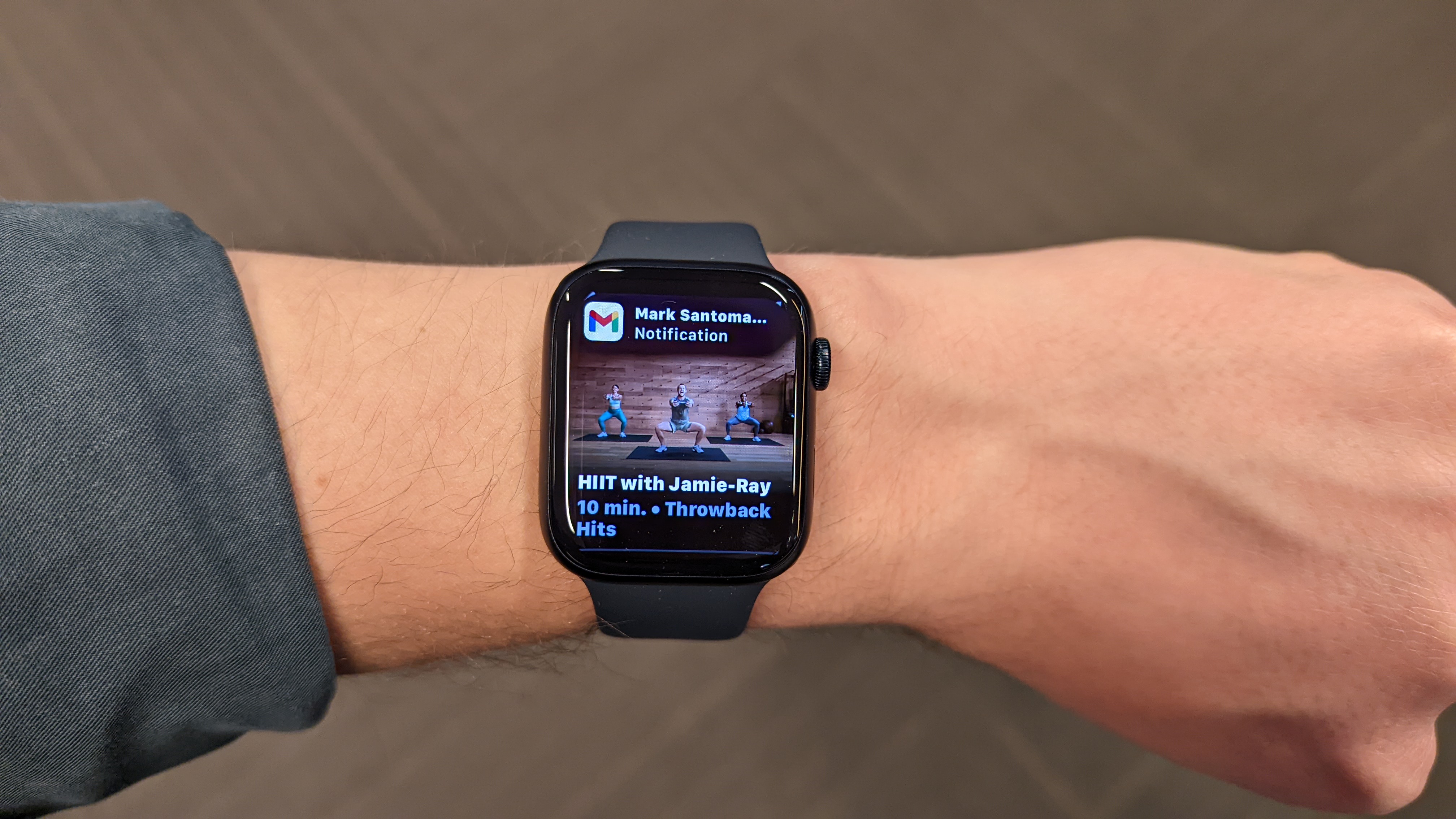 The only other change I noticed while using the Series 8 was to notifications.

Notifications used to take up the entire screen – even when you were doing something on the watch itself.

Now, if you're using an updated Apple Watch, a notification will appear as a banner at the top of the screen.

It's designed to be less obstructive, but given the size of the screen, anything readable is going to take up a decent amount of real estate.

I selected the 45mm aluminium case in the colour 'midnight' which felt nice and light on my wrist, and liked knowing it was made of 100 per cent recycled aluminium. 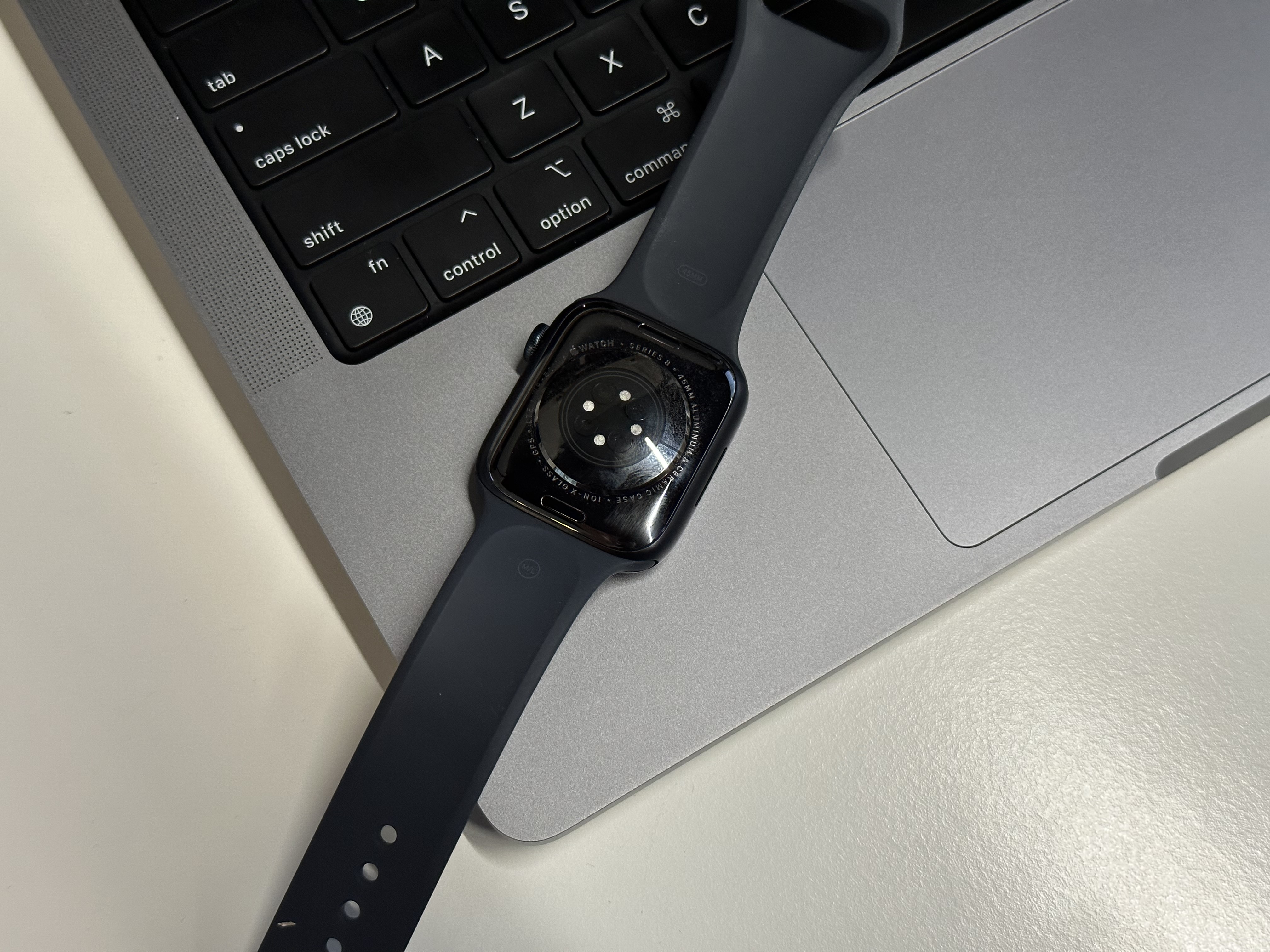 Having previously worn a stainless steel Series 6 and a forest green Series 7, I'm definitely a bigger fan of the more understated black look.

It paired nicely on my wrist with the new metropolitan watch face (in a mean red tint) and a dark leather band.

It felt sophisticated enough to wear with a suit on camera and casual enough to dress down.

Like the iPhone 14, Apple Watch Series 8 is a story of refinement.

Disappointingly, it features the same one (and a bit) day battery life as the Series 7.

When the admittedly much bulkier (and far more expensive) $1,299 Watch Ultra is touting two and a bit days of activity and sleep tracking, I can't help but wish a similar upgrade was included in the Series 8.

Battery life has always been underwhelming on Apple Watches when compared to designs from Withings and others that can last weeks.

After eight iterations, SE models and more, I really wish Apple was closer to offering a better battery balance – even if it does more in the background than the competition.

Additions like cycle tracking will be critical to many women's lives, but outside of the rare instance in which an Apple Watch is the only thing that will dial 000 during an emergency, the technological and design upgrades on Apple's Watch Series 8 are modest compared to previous years.