‘Punching above’, The Core Agency repositions to embrace small-agency culture

‘A poor decision to ignore it’: why the metaverse matters for marketers

Creativity ‘at its best in the face of adversity’: agency execs on navigating the throes of inflation

Mumbrellacast Live: Mim Haysom, Nick Garrett on the evolving CMO; why we should be playing a ‘bigger game’

Is Dentsu about to put all its toothpaste back in the tube?

In a climate of mistrust and misinformation, reputation intelligence needs a rethink

Is it ever OK to use profanity in advertising? 4 industry execs reveal their candid thoughts

Is it ever OK to use profanity in advertising? 5 industry execs reveal their candid thoughts

Mumbrellacast: Dialing in from the Cannes Lions Festival of Creativity

#TikTokMadeMeBuyIt: the 12.4B-strong trend advertisers should be leveraging

Two years, three markets later: Shadowboxer founders on playing in their own space and shooting from the hip

Is the metaverse the newest market for digital OOH?

Brands of the future: marketers light up Vivid Sydney after a two-year hiatus

Future creative: Where do you see the role of the ECD going in the next 10 years?

Mumbrellacast: Chris Howatson, Tajer is back, plus Dan Monheit checks in from SXSW

Moving beyond rainbow washing: how brands can support the LGBTQIA+ community authentically

Getting creative: The most frustrating part of the industry for ECDs

Aussies have big plans for 2022: Here’s how brands can help them realise their ambitions

IWD 2022: ‘Be more gentle – I would love to hear from a man who has received that advice.’

Stripping the value or a positive trend? The evolving nature of creative production 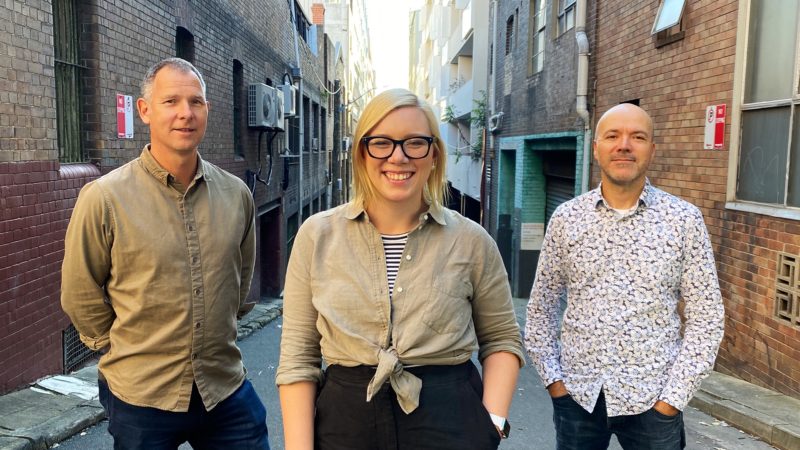 Sydney-based independent agency The Core Agency is making the most of its small size, pitching the agility and flexibility that comes with a smaller team as the secret weapon that allows it to “punch above” for its clients.

The new positioning speaks to the agency’s differentiation from the larger agencies that fall under a holding company umbrella, whose scale and resources generally see them operate in an entirely different way, as per the indie versus holdco debate that pervades the advertising industry.

Herself having been with the agency for the best part of a decade and taking an owner-ship stake earlier this year as she stepped into the managing partner role, Rebecca Turner feels that for The Core Agency, “small” is the key to its success.

Of course, she acknowledges there are certain types clients the agency’s approach meshes best with, describing their core clientele as challenger brands who are third or fourth in their category, and need to do more with less.

“For so long, we tried to escape the size of the agency, and felt that it was a weakness, or it was perceived as a weakness. So, in the process of doing our positioning, we spoke to a lot of our clients as well as some CMOS that we don’t work with, just for an outsider’s perspective, and I was amazed when we talked about small creative agencies and they were like, ‘that’s what we want to work with’. They said ‘we love small agencies, that means there’s no red tape, it means they’re more innovative and generally the creatives from the bigger best agencies have moved to the small agencies’. It was such a refreshing conversation, because for so long in my career, I’ve kind of tried to avoid the ‘What’s your headcount question?’ and it’s completely reframed for me what ‘small’ means.”

“For so long, something that I’ve thought we need to escape is actually the reason so many of our clients love working with us,” adds Turner.

Agency founder and creative partner Jon Skinner, who co-founded the agency with business partner and TBWA stablemate Christian Finucane back in 2008, explains for The Core Agency, “small” is more than just a head count, but a mentality they will continue to uphold, even as they scale.

“It’s like we integrate with their cultures, you know, how they work, their mentality,” he says. ‘You know, you’ve got to pick the mood and the right way of working, and then we work out how to get stuff done.”

The flexibility that comes with ‘small’ is one of the biggest draw for many clients, according to Turner, with smaller agencies lacking the rigid standardised procedures and bureaucratic processes that become necessary with scale, hence enabling them to align more closely to the needs and requests of the client. “There’s far less staff turnaround here, through having a better culture than often there is on a client side,” says Skinner. “So they really do depend on us, you know, for some of the knowledge that they don’t have at that point themselves in their own business.”

The longevity of staff, and tight-knitted nature of a smaller team inevitably enables clients to have more direct access to to senior, experienced team members, says Turner.

“We’re finding that third or fourth in category clients are saying ‘I still need that big brand thinking and that seniority, but I don’t get the love in the bigger environments’.”

It is this insight which led The Core Agency to lean into their “smallness” with the “punch above” positioning, which speaks directly to mid-size brands who synergise with the smaller agency.

Turner adds the positioning is not only a promise for the agency’s clients, but one for its people.

“I mean, we’re all in a complete talent war at the moment. So, you know, for our people, it’s like, you’re not going to just be sitting on one account, working in one way working with one client. There’s no ceiling, to your ambition in this kind of environment. And we’ll make sure that you can punch above that you’re not restricted to any one department or any one client or any one type of brief.”

It’s culture is the crux of what it means to be small for The Core Agency, and for both Turner and Skinner, it’s something they are very intentional about.

“Culture is not how many beers you’ve got in the fridge,” says Skinner. “Or if you’ve got some beanbags, or a ping pong table? Do people genuinely love coming in? Absolutely go above and beyond? We’re all in the trenches together and you need to be, you know, this is advertising these things happen.”

The post ‘Punching above’, The Core Agency repositions to embrace small-agency culture appeared first on Mumbrella.