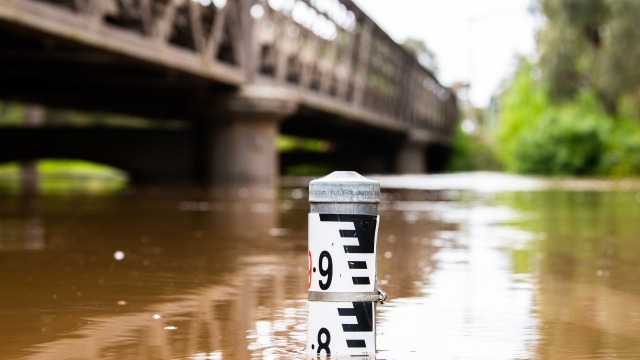 Thousands of homes across Victoria are without power, and Tasmanians are on flood alert as wild winds and heavy rain lash south-eastern Australia.

In NSW, the search continues for a man believed to be missing in floodwaters in the state’s west.

Police and other emergency services are searching for a 63-year-old man last seen on a rural property on Lachlan Valley Way, Hillston, on Tuesday.

The Bureau of Meteorology has also issued severe warnings for Tasmania, Victoria and NSW as a cold front and trough bring widespread heavy rain, isolated thunderstorms and damaging winds on Thursday.

In northern Tasmania, an emergency evacuation order has been issued for the northern town of Railton, with the Redwater Creek rising rapidly.

“Flood waters are expected to enter some properties causing significant and widespread flooding,” the warning said.

There is the potential for significant moderate to major flooding across all three states on Thursday.

“I’ve been briefed this morning and we’ve certainly got federal emergency management officials in most of the state operations centres to make sure that we are well plugged in to how things are going.

“There’s just so much water around. Some of these communities have been having floods now for a couple of months, time after time. So there’s just not a lot of capacity left in the system for extra rainfall that we expect to see in coming days.”

The BOM said Victoria would endure a “significant rain event”, with heavy fall rain across much of the state, including Melbourne, on Thursday.

Victorians can expect wild weather and flash flooding with the worst weather to hit in the afternoon and evening.

At least 100 millimetres of rain had already fallen in the northern Goulburn-Broken catchment by Thursday morning. State Emergency Service officials warn those in western and central regions were also at risk of serious impact.

“We … have a watch and act out for major flooding on three of our river systems. The first of those is for the Campaspe River in the central part of Victoria,” he told ABC News.

“Across in the north-east we’ve got a warning out for the Ovens and Kings rivers, which converge in and around Wangaratta and again on Saturday there may be flooding expected there.”

Flood warning and watch and act alerts covered much of Victoria on Thursday. Stay across the affected areas at bom.gov.au.

Victorian emergency management commissioner Andrew Crisp told 3AW the worst of the rain would “move across more to the north-east of the state from late morning”.

Communities near rivers, creeks and low-lying areas in the state’s north have been told to stay alert and up to date with changing warnings.

Damaging wind gusts up to 110km/h were tipped to hit alpine peaks on Thursday and clear from Friday morning.

Moderate flood warnings have been issued along the Avoca, Loddon and Murray rivers.

The SES received hundreds of calls for assistance on Wednesday night, with about 9000 homes without power, according to Powercor.

The northern half of the island state is on high alert for flash flooding.

Falls are expected to be on par with deadly floods in 2016.

The SES on Thursday morning issued an emergency warning for Railton and surrounds.

“Floodwaters are expected to enter some properties causing significant and widespread flooding,” it says.

“If you have a flood plan, use it now. Consider leaving … for a safer place if it is safe to do so.”

The port of Devonport will cease all commercial operations from midday Thursday, as conditions are expected to worsen.

The Bureau of Meteorology said intense falls might lead to dangerous and life-threatening flash flooding in parts of Tasmania’s north-west, with six-hourly totals up to 100 millimetres.

A severe weather warning covers about half of the island state, with four rivers in the north and north-west subject to moderate flood warnings.

Southwest Tasmania can expect 30-60 millimetres, while the south-east, including Hobart, will receive 15-30 millimetres.

In NSW, following heavy showers in many parts of the state, dozens of rivers are still flooding and evacuation orders are in place.

The BOM said rainfalls of 30-50 millimetres were likely, with isolated heavier falls up to 65 millimetres.

Winds of 50-60km/hr, with damaging wind gusts of about 110km/h, are possible over alpine areas above 1500 metres from later on Thursday.

Flood warnings are current for catchments across southern NSW.

NSW Police resumed the search for a missing 63-year-old at Hillston, in the state’s west, on Thursday. He was last seen on Tuesday afternoon, and Thursday’s search focused on the flooded Lachlan River.

It follows the discovery of the body of a 46-year-old man in his submerged car near Bathurst on Wednesday.

The SES has advised people to move vehicles under cover or away from trees and not to drive, ride or walk through flood water.

Stay up-to-date with the latest weather forecasts and warnings at bom.gov.au.