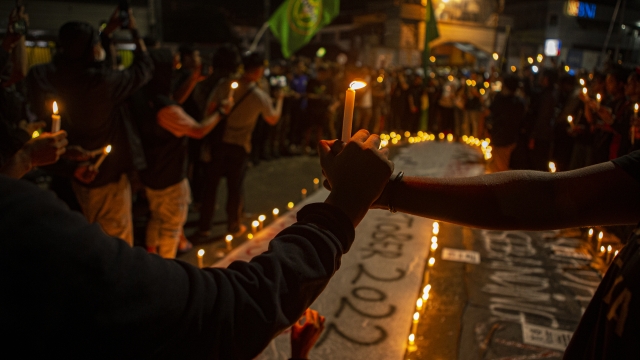 An Indonesian police chief has been fired and nine other officers suspended after the weekend stampede at a football stadium that left 125 people dead, including 32 children.

Chaos erupted after thousands of fans invaded the pitch as hosts Arema FC lost 3-2 to rival East Java club Persebaya Surabaya, in one of the world’s worst sports disasters.

Ferli Hidayat, of Malang city, has been replaced as part of the police investigation into the tragedy

At least 28 officers are also being investigated for suspected ethical violations in connection with the incident, National Police Spokesman Dedi Prasetyo said.

“We are working fast, but with prudence,” Prasetyo told a news conference.

“The team is expected to finish its work in two or three weeks,” Political, Legal and Security Affairs Minister Mohammad Mahfud said after a meeting of senior ministers and security officials to discuss the tragedy.

He said the government had also ordered the national police to investigate people deemed responsible for the incident “in the next few days” and evaluate security measures.

Most of the victims died of a lack of oxygen and from being trampled during the stampede, police said.

More than 300 people were injured, some seriously.

The use of tear gas raised questions about whether security personnel had followed proper procedures in dealing with a crowd inside a stadium.

Police commanders and other officers must be held accountable for their decision to fire “significant and excessive amounts of tear gas,which apparently caused suffocation, and stampeded the crowd towards exits where many were trampled to death,” said Phil Robertson, deputy Asia director at Human Rights Watch.

“FIFA’s own rules bar use of ‘crowd control gas’ in stadiums by security officials on edge of the field, which was precisely where the Indonesian police were at the time of the incident,” he said.

A witness says tear gas was fired into the stands during the chaotic crowd scenes.

Dicky Kurniawan felt the sharp sting in his eyes as Indonesian police fired tear gas into the football stadium.

From his seat near an exit, he said he watched the melee unfold on Saturday night as angry fans poured into the field.

The mob threw bottles and other objects, and the violence spread outside the stadium, where police cars were overturned and torched.

Mr Kurniawan, 22, was shocked when police fired tear gas at spectators in the stands.

As the stinging gas spread through the stadium, he grabbed his girlfriend and – like everyone else – dashed to the exits.

“The chaos was on the field, but they fired the tear gas into the stadium stands,” Mr Kurniawan said as he described the tragedy from his hospital bed.

He received bruises on his face but said he was fortunate to survive.
“Now I am done watching soccer in the stadium,” Kurniawan said.

In the bed next to Kurniawan, teenager Farel Panji also had a lucky escape.

Panji, 16, had just left his seat to go to the exit when the tear gas came. As people ran past him to get to the exit, Mr Panji said he got pushed down by the crowd and collapsed.

“I fainted for a while. When I woke up, I was still in the stadium seating area,” he said. He got home safely and was taken to the hospital the next day.

Malang’s Dr. Saiful Anwar General Hospital, one of several used to treat victims, was filled Sunday with grieving relatives waiting to identify bodies in the morgue or for information about their loves ones.

Police say 323 people were injured in the crush, with some still in critical condition.