One dead, others injured after tornadoes tear through southern USA

Depp lawyers point to Amber Heard's drug use during trial

US boy, 13, dies after being buried under sand dune at state park

US Congress holds first hearing on UFOs in decades

A tornado tore through parts of New Orleans and its suburbs on Tuesday night, ripping down power lines and scattering debris in a part of the city that had been heavily damaged by Hurricane Katrina 17 years ago.

St Bernard Parish Sheriff Jimmy Pohlmann said during a news conference that one person was confirmed dead and multiple others were injured in the suburb.

Other tornadoes spawned by the same storm system hit parts of Texas and Oklahoma, killing one person and causing multiple injuries and widespread damage.

A video taken by a local television station showed a large black funnel visible in the darkened sky looming among the buildings in the eastern part of New Orleans.

The tornado appeared to start in a New Orleans suburb and then moved east across the Mississippi River into the Lower 9th Ward of New Orleans and parts of St Bernard Parish — both of which were badly damaged by Katrina — before moving northeast.

Reggie Ford was nearby when the tornado struck. He drove from the area, only to return once it passed to offer help to anyone who needed it. So far, he says, the streets are eerily quiet, only filled with fresh devastation from the twister.

A video he posted on Instagram shows debris cluttered streets and shredded buildings. A battered car lies on its roof.

Debris was spread across an area covering multiple blocks east of New Orleans.

In the New Orleans suburb of Arabi, there was a strong smell of natural gas in the air as residents and rescue personnel stood in the street and surveyed the damage.

Some houses were destroyed while pieces of debris hung from electrical wires and trees. An aluminium fishing boat in front of one house was bent into the shape of a 'C' with the motor across the street.

Power poles were down and leaning over, forcing emergency workers to walk slowly through darkened neighbourhoods checking for damage.

Michelle Malasovich lives in Arabi. Initially, she had been worried about family that live in areas north of Louisiana that were also getting hit by bad weather.

She was texting with her family there when, she said, “All of a sudden the lights started flickering". She didn’t hear the distinctive freight train sound that many people say comes with a tornado but it was extremely windy, and her husband yelled at her to get out of the bedroom. He was out on the porch and saw the tornado coming.

“It just kept getting louder and louder,” Ms Malasovich said.

After it passed they came out to survey the damage.

“Our neighbour’s house is in the middle of the street right now.”

Ms Malasovich’s house fared relatively well, she said. Some columns were blown off the porch and the windows of her Jeep were blown out.

Down the street, a house was severely damaged and parked vehicles had been moved around by the winds: “This is serious for down here.”

New Orleans Mayor LaToya Cantrell tweeted late on Tuesday that there were no reports of casualties or significant damage to Orleans Parish and that partners Entergy NOLA were working to restore power to the 8000 customers impacted.

About 13,000 homes and businesses were reportedly without power in the three parishes around New Orleans after the storm.

Guy McGinnis, president of St Bernard Parish, told WWL-TV that the parish had “widespread damage” in parts of the parish that borders New Orleans to the east.

Search and rescue teams were going through homes looking for people and responding to at least two calls from people who said they were trapped in their homes in their bathrooms.

“As of right now no major injuries are reported,” Mr McGinnis said.

It wasn’t immediately known whether anyone was injured. While the metropolitan region is often struck by severe weather and heavy rains, it’s rare that a tornado moves through the city.

High winds uprooted trees in Ridgeland, Mississippi, as a possible tornado passed the Jackson-area city on Tuesday afternoon, but there were no immediate reports of any injuries or serious damage to buildings.

Campus police at Mississippi State University, in Starkville, shared a photo of a large hardwood tree lying across a street.

Many schools were closing early or cancelling after-school activities on Tuesday in parts of Louisiana and Mississippi to allow students to get home before the weather deteriorated.

Shelters opened for residents who needed a place to stay while the storms travelled through.

High water posed a threat to motorists early on Tuesday in Louisiana on several roads, including a stretch of Interstate 20 and several state highways after rains overnight, authorities said.

Deputies in Caddo Parish, which includes Shreveport, rescued three drivers from high waters during the night, the sheriff’s office tweeted before dawn.

The storms were expected to intensify throughout the day as temperatures rise, increasing the threat of tornadoes, hail and strong winds. 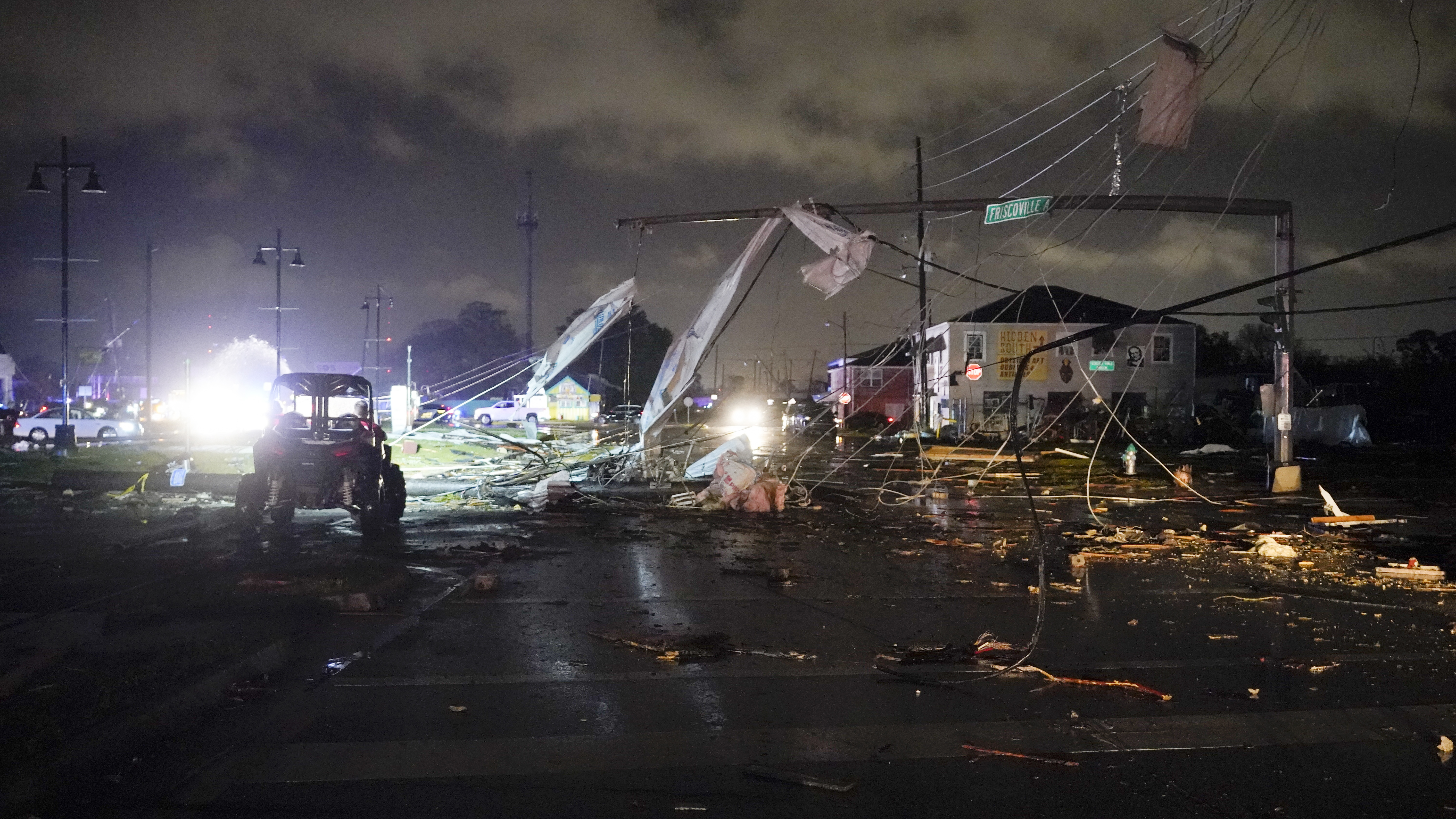 Forecasters predicted intense tornadoes and damaging winds, some hurricane-force with speeds of 120kph or greater, in much of Mississippi, southern and eastern Louisiana, and western Alabama. Baton Rouge, Louisiana, and Jackson, Mississippi, were among the cities at risk for bad weather.

The system dumped heavy rain, downed trees and prompted multiple tornado warnings as it moved into Alabama on Tuesday evening.

The roofs of several homes were damaged in Toxey, Alabama, after a storm preceded by tornado warnings passed through the area, the National Weather Service tweeted.

Louisiana’s federal and state authorities reminded thousands of hurricane survivors living in government-provided mobile homes and recreational vehicle trailers to have an evacuation plan because the structures might not withstand the expected weather.

More than 8000 households live in such temporary quarters, officials said.

In Texas, several tornadoes were reported on Monday along the Interstate 35 corridor, particularly in the Austin suburbs of Round Rock and Elgin, as well as in northern and eastern Texas and southern Oklahoma.

In Elgin, broken trees lined the rural roads and pieces of metal — uprooted by strong winds hung from the branches.

Residents stepped carefully to avoid downed power lines as they worked to clean the remnants of broken ceilings, torn down walls and damaged cars.

“There used to be a barn there,” Mr Harkins said, pointing to an empty plot on his uncle’s property covered with scattered debris.

He said the building was empty when the first tornado hit on Monday, and that his family is thankful nobody was hurt.

“And then one went up and another one came down.” 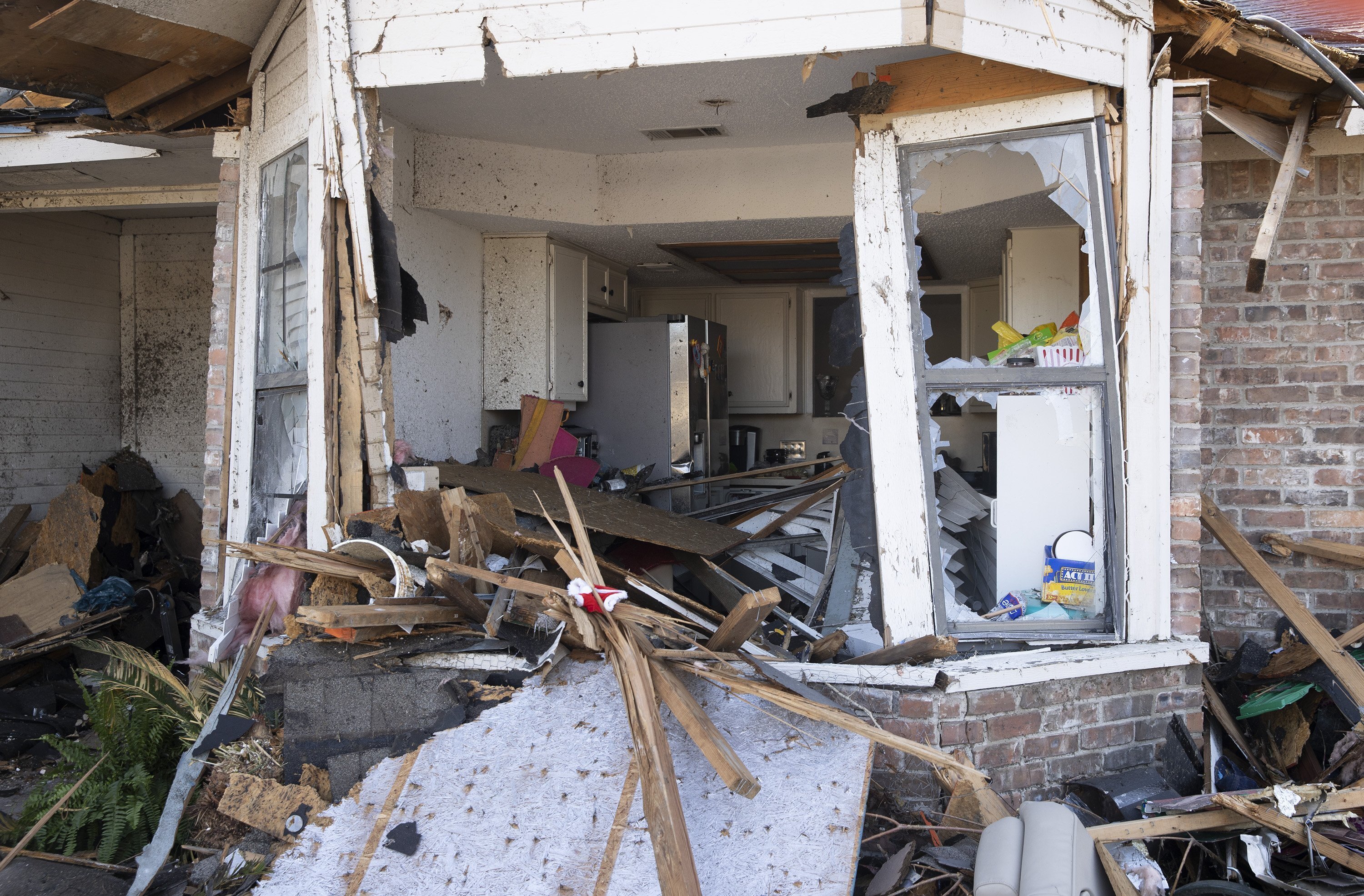 The tornadoes came on a wild weather day in Texas — wildfires burned in the west and a blizzard warning was issued for the Texas Panhandle, where up to 23 cm of snow fell.

“There’s absolutely nothing out of the ordinary in terms of what we saw yesterday and we see today,” said Victor Gensini, a meteorology professor at Northern Illinois University, who studies severe storms.

It’s the time of year when tornadoes and storms are to be expected and there are usually more during years with a La Nina, a natural cooling of parts of the Pacific that alters weather across the globe, he said.

Mr Abbott said 10 people were injured by storms in the Crockett area, while more than a dozen were reportedly hurt elsewhere.

The Grayson County Emergency Management Office said a 73-year-old woman was killed in the community of Sherwood Shores, about 95km north of Dallas, but provided no details.

Homes and businesses in at least a dozen Texas counties were damaged, according to Storm Prediction Centre reports.

Officials reported damage throughout Jacksboro, about 100km northwest of Fort Worth. Photographs posted on social media showed a storm ripped the wall and roof from parts of Jacksboro High School, including its gym.