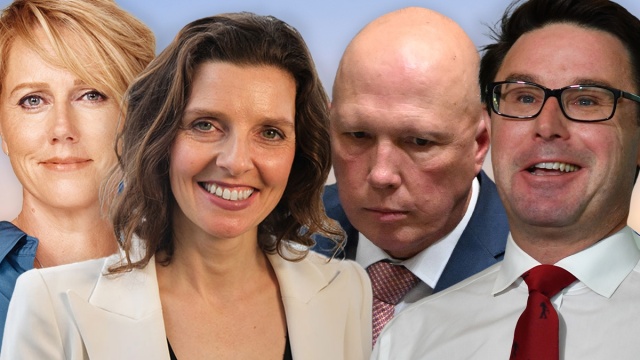 At the close of Parliament’s first sitting fortnight on Thursday, two sights captured perfectly the political dilemma facing the Coalition.

Scott Morrison sat listlessly and scratched his forehead after the House of Representatives broke a decade-plus climate policy drought by voting for an emissions reduction target to be enshrined in law.

On the other side of the chamber, dissident Liberal MP Bridget Archer seemed at home after crossing the floor and sitting among the independent MPs who challenged political orthodoxy by winning Liberal seats and promising to act on climate change.

Can the twain ever meet?

That is the central dilemma for the Opposition Leader Peter Dutton.

For now, he will, to borrow a phrase he was fond of during the recent election campaign, be having a bet each way.

The House of Representatives voted by the cushy margin of 89 to 55 for progress on an issue that felled three previous Australian prime ministers, signalling that the caravan was finally moving on.

But the Coalition seems to be in thrall to the barking dogs.

Mr Dutton was this week, incredibly, being fitted up by figures such as the Institute for Public Affairs’ John Roskam as the leader of a Labor-lite party that was giving in to fashionable inner-city impulses on emissions reduction.

His crime was to announce that the Coalition will bring a more ambitious 2030 emissions reduction target to the next election than it did in May, when it stood by the 26 to 28 per cent target adopted by Tony Abbott’s cabinet.

To anyone paying attention this otherwise unspecified declaration might have seemed unremarkable.

After all, estimates of Australia’s current trajectory have emissions reducing by 35 per cent even if we were to, more or less, stand with our hands in our pockets from here on in.

Existing measures and the fact that progress, once initiated, tends to gather speed as technologies improve and environmental consciousness expands, will take care of that.

It is on this basis that Energy Minister Chris Bowen says that the 43 per cent target is the beginning of the government’s ambitions; measures such as those on electric vehicles are likely still to come.

But where conservative intellectuals once stood athwart history yelling ‘stop’, today the movement’s influential voices appear on Sky News to make the case for going backwards.

This is what makes life so difficult for Mr Dutton.

It seems increasingly likely that the policy the Coalition will end up settling on before the next election will be something not dissimilar from what passed the lower house today.

That is, if the party has any hope at all of reclaiming the seats it has lost to the independent MPs who are progressive on climate change.

Swimming against the tide

This cannot be lost on the Liberal Party’s federal director Andrew Hirst, who must still feel so keenly embarrassed after having masterminded the least successful election campaign in the party’s history.

Last week, Mr Hirst told Coalition MPs what must have already been obvious – any hope of ever winning government again will require them to at least pretend to re-engage with the constituents who dumped them so emphatically in favour of the so-called teal independents.

For now he will try to have it both ways.

The Coalition has already sketched out a campaign to attribute rising electricity prices to the difference between the government’s climate targets and whatever its own ends up being.

This will have to be taken against the tide of opinion from industry and business, which is backing Labor’s plan.

But some Coalition MPs are consoling themselves that if this does not stick, complete and humiliating reversal will remain a possibility.

But in the meantime, many Nationals MPs like the party’s leader and notional climate progressive David Littleproud or the Victorian MPs from electorates where large-scale renewable energy production is already under way are in an invidious position.

Indi MP Helen Haines, not often listed alongside other climate independents but whose electorate once was Liberal, said she was “bitterly disappointed” to see them vote against her amendment to ensure regional Australia benefits from the shift to a renewable economy.

One can only imagine how they felt.

The post On climate, the Coalition looks for an each-way bet on a losing horse appeared first on The New Daily.