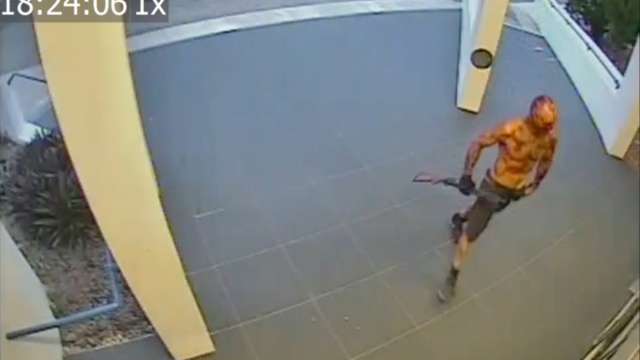 A gunman who murdered three people and killed another during a drug-fuelled shooting spree across Darwin will spend the rest of his life in prison with no chance of release.

The 48-year-old was sentenced in the Northern Territory Supreme Court on Thursday to three life sentences for the three murders and 15 years for manslaughter, with Justice John Burns refusing to set a parole date.

Justice Burns said “the victims were entirely innocent and were effectively defenceless”.

He described Mr Baydoun’s murder as “a brutal killing, in which you shot the victim four times, twice to the right arm, once to the chest, and finally to the left side of his head”.

Justice Burns also said the attack on Robert Courtney was “prolonged and vicious”.

“Mr Courtney truly fought hard against you,” he said.

“I have no doubt that as of now, you will return to methamphetamine use if released from prison,” he said.

“You have a history of asserting a desire to change your behaviour, but you never carry through with these statements when you return to the community.”

Hoffmann was also sentenced for six other charges, including three counts of recklessly endangering life, drug possession and one of threatening to kill.

Hoffmann was high on methamphetamine when he shot the four men dead while hunting a man named Alex Deligiannis, who he believed had stolen his ex-girlfriend, Kelly Collins.

He shot Mr Baydoun four times with a double-barrel shotgun at the Palms Motel in central Darwin.

Mr Hellings was gunned down through the front door of his apartment block about 800 metres away.

Hoffmann’s next victim was his mate, Mr Sisois, who he shot in the head in the car park at the nearby Buff Club bar and restaurant.

Mr Courtney was murdered at an industrial yard at Darwin Recycling, about 2.5km away.

He was found with 69 injuries, including 36 stabbing and slicing wounds, multiple blunt force injuries and a gunshot wound.

Mr Deligiannis had previously visited three of the locations regularly.

Hoffmann and Ms Collins met in early 2019 in a drug rehab centre, where the pair made plans to move in together after they left the program.

But two weeks before the shootings, Ms Collins sent Hoffmann a text message saying she was in love with Mr Deligiannis and learned she had resumed using methamphetamine.

Hoffmann previously told the court the news turned his world upside down.

“Things spiralled out of control with Kelly,” he told Justice John Burns.

Hoffmann has alleged a group of men had been supplying Ms Collins with drugs, raping her and forcing her to work as a prostitute.

“She had guys stalking her that were [also] stalking me,” he said.

He told the court the pair met “naturally” while they were drug-free at the rehab centre after he was released from prison and planned to move in together. But her regression had left them vulnerable.

“I tried to save her. I feared for my life and my girlfriend,” he said.

On the day of the killings, Hoffmann believed Ms Collins, an ex-prostitute, was in danger and likely to have been physically harmed.

“I had full visions of Kelly being held against her will as a hostage. The night before I was convinced I’d been poisoned and I believed she had been too,” he said.

The post NT triple murderer sentenced to life in jail appeared first on The New Daily.