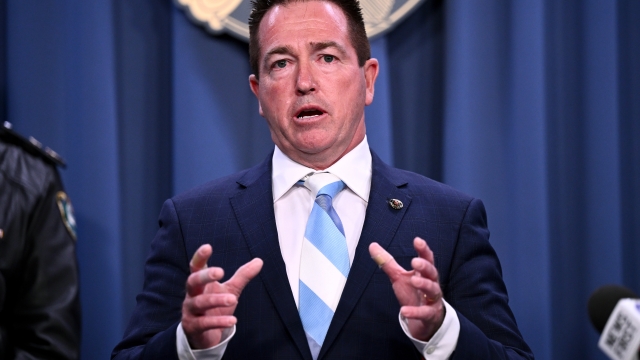 The younger brother of NSW Police Minister Paul Toole has been charged, accused of being part of a large drug syndicate supplying ice.

Detectives have have charged four people following an investigation into the supply of prohibited drugs across the state’s Central Coast and Hunter region.

Police say they seized more than two kilos of methylamphetamine with an estimated potential street value of $2 million as well as $220,000 cash, a gel-blaster firearm and electronic devices in raids across multiple properties on Wednesday.

Joshua Toole, 38, was arrested along with a 24-year-old woman following vehicle stops at Belmont in Newcastle and Killarney Vale on the Central Coast, shortly after 9am.

Toole has been charged with supplying a large commercial quantity of a prohibited drug, participating in and directing the activities of a criminal group and contributing to criminal activity as well as five counts of supplying prohibited drugs on an ongoing basis.

He will appear in Newcastle Local Court on Thursday.

The deputy premier and Nationals leader told News Corp he was “devastated” by the news.

“But we are not the first family to have to deal with this and unfortunately we won’t be the last,” he said.

She was granted conditional bail to appear at Wyong Local Court on Thursday.

They were refused bail and will appear at Newcastle Local Court on Thursday.