Novak Djokovic to top seedings at Wimbledon with Daniil Medvedev out

‘I understand the consequences of my decision’: Novak Djokovic says he’s prepared to sacrifice titles

Djokovic entered in US event next month

Novak Djokovic to get vaccinated against COVID-19: Report

Ged Kearney: The Djokovic case highlights the stark contast of our treatment of refugees

Spain’s message to Djokovic: Get the jab

The Djokovic drama has given his brand exactly what he wants

No vaccine pass, no French Open for Novak Djokovic

Novak Djokovic could return to Australia despite visa cancellation

Australian Open 2022: Nine names tennis partners and what the coverage will offer brands

Novak Djokovic to be deported after losing legal case

‘Stop this debacle’: Minister urged to act on Djokovic

Spain adds to Djokovic’s legal woes, with probe into travel

Will Novak Djokovic’s inclusion be a ratings win for Nine? The industry’s view…

View from The Hill: Morrison government considering whether to cancel Djokovic’s visa – again

Novak Djokovic has won his court case, but he could still be booted from Australia

What’s next for Novak Djokovic? Why Monday’s court hearing could go either way

Novak Djokovic faces deportation from Australia: How did we get here? 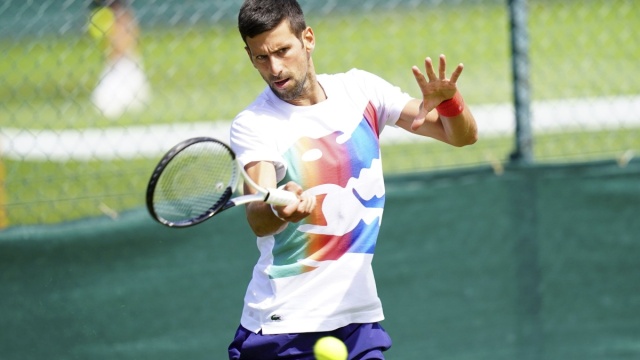 Wimbledon champion Novak Djokovic will head into next week’s tournament as the men’s top seed with Russian world No.1 Daniil Medvedev banned from taking part and second-ranked Alexander Zverev out injured.

Organisers of the grass court grand slam have banned players from Russia and Belarus from playing at this year’s Wimbledon following Moscow’s invasion of Ukraine.

Zverev had surgery on torn ligaments in his right ankle this month after he was forced to retire from his French Open semi-final against Rafael Nadal.

Djokovic, who was unable to defend his 2021 Australian Open title and the 2000 ranking points he earned due to his non-vaccinated status against COVID-19, recently lost his top spot to Medvedev.

The Serbian, who has won the past three editions of the grass court major, will slip further down the rankings after Wimbledon as he will lose another 2000 points with the ATP and WTA stripping the tournament of points.

The absence of Medvedev and Zverev means Nadal, who is halfway through a possible calendar year slam after winning the Australian and French Open titles, will be seeded second.

It also results in Djokovic and Nadal finding themselves in different halves of the draw and they cannot face each other until the men’s final on July 10.

The duo met in this year’s Roland Garros quarter-final where the Spaniard triumphed.

Britain has two players in the top 10 at its home major with Cameron Norrie ninth while US Open champion Emma Raducanu is 10th in the absence of Belarussian Aryna Sabalenka.

Poland’s world No.1 Iga Swiatek will be the women’s top seed with Estonian Annett Kontaveit next best.

Wimbledon organisers had previously used a computer-based system favouring results on grass courts in the previous two years to determine the seedings but from the 2021 edition seedings mirror the world rankings.

The post Novak Djokovic to top seedings at Wimbledon with Daniil Medvedev out appeared first on The New Daily.