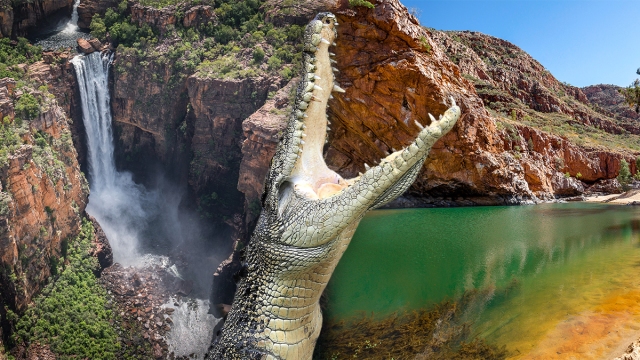 Tourists have been flocking to the Top End to escape dreary weather around much of the country.

In early September, the Bureau of Meteorology confirmed that a La Niña event is under way in the Pacific Ocean, increasing the likelihood of above-average rainfall during spring and summer in eastern Australia.

According to forecaster WeatherZone, current forecasts indicate that this episode is expected to peak during spring (most likely around November) and then weaken in early-to-mid summer.

This does not bode well for Aussies planning a spring or summer vacation on the eastern seaboard.

The research revealed that 84 per cent of Australians feel their ability to enjoy summer has been affected over the past three years, and 68 per cent are eager to take advantage of the upcoming summer early.

The Dry season, running from May until October, is arguably the best time to visit the Northern Territory.

The days are warm and sunny, the nights cool; and importantly, humidity levels are lower than in the Wet season: About 60 to 65 per cent.

“With our new research finding that 63 per cent of Australians would consider getting their summer holiday in early if they could expect summer-like conditions, we are encouraging holidaymakers to whip out their short sleeves and enjoy an early summer from September in the Territory,” Mr Quarmby said.

“We know that almost half of the country is planning to take a holiday this spring or summer.

“With La Niña unfortunately showing warnings of continuing into this summer and a negative IOD event under way, we’re inviting Aussies that are sick of the rain and cold to join us for an early summer full of adventure and fun, with a range of great deals and savings.”

One of the Territory’s most popular destinations is Kakadu National Park.

One of the best and most notorious places to see these prehistoric scaly beasts is Cahills Crossing, a river causeway that visitors traverse in four-wheel-drives at low tide or go to watch the crocs feed at high tide.

Cahills Crossing boasts one of the highest densities of crocodiles anywhere in Kakadu, with the biggest specimens between 4.5 and 5 metres long and weighing up to 700 kilograms.

Serious safety concerns were raised earlier in the year when images emerged of tourists crowding around the banks of the crocodile-infested river where people have previously been killed.

The crossing’s viewing area has been closed since May, but reopened on Wednesday following a $3 million upgrade at the site.

The upgrade provides visitors with a safe vantage point to view crocodiles.

The Cahills Crossing site upgrades are part of the government’s $276 million investment into upgrading infrastructure in the dual World Heritage-listed Kakadu National Park.

The infrastructure was designed in close collaboration with the region’s Traditional Owners to showcase and protect the site’s unique environmental and cultural values.

Minister for the Environment and Water Tanya Plibersek said that one of her first trips as a newly minted minister was to Kakadu National Park to listen and learn from Traditional Owners.

“The construction of the new Cahills Crossing viewing platform, picnic area and walking trail will give visitors to Kakadu National Park an unforgettable wildlife experience while keeping them safe,” she said.

“Importantly, this project was co-designed with Traditional Owners from Kakadu to ensure the natural and cultural values of the site are protected.”

Federal Member for Lingiari Marion Scrymgour said that the co-design process between Parks Australia, Traditional Owners and local architects ensured the protection of the area’s natural and cultural values.

“The Albanese Labor government is delivering on its commitment to roll out infrastructure at Kakadu National Park in close consultation with Traditional Owners and this project demonstrates that commitment,” Ms Scrymgour said.

This was written with the aid of Tourism NT