Government expects corruption bill to be on schedule, even as PM says it’s no time for politics

No republic referendum this term: Albanese

‘We will see what occurs’: Albanese shoots down talk of Australia as republic

Jobs and skills summit: Who’s going? And what’s on the agenda?

Albanese’s first 100 days have been faultless, but tax cuts might trip him down the track

‘We absolutely need to stay ahead of the curve’: Fein and Abels on domestic violence leave

‘I’ll fix the problem, mate’: The chilling insight into how power worked in the Morrison cabinet

‘Talk to my people’: Albanese mulls DJ side hustle 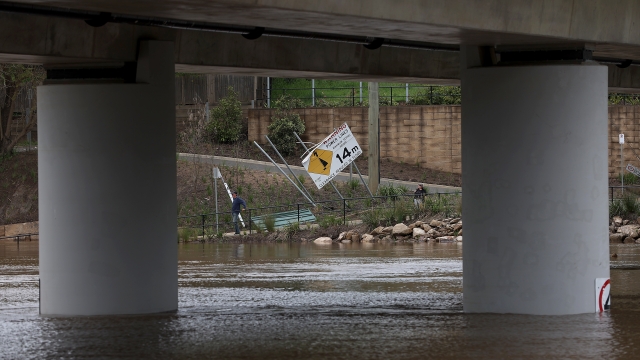 New South Wales is expecting a few days of relief from the heavy downpours that have smashed the state, but flood waters will continue to rise.

“This is not a time for people to take risks,” he said on Sunday.

“My heart goes out to those people who have suffered time and time again, particularly during the recent period.”

Sunshine was forecast for the start of the week but NSW was expecting another big system to hit on Wednesday.

The reprieve comes after a weekend of wild weather that has left rural and regional areas “on edge” while sparing Sydney from the worst impacts.

Renewed river level rises after heavy rain have led to #Moderate to #Major Flooding in many inland rivers across #NSW today.

Emergency services performed 28 flood rescues across NSW in the 24 hours up to Sunday afternoon, with 21 of them overnight.

Five emergency warnings have been issued across NSW, from Dubbo to the outskirts of Sydney.

The evacuation orders are among 100 warnings issued across NSW, including advice-level warnings and watch-and-act warnings.

Residents along the Hawkesbury and Lachlan rivers, as well as those in the Central Coast and the state’s north, have been warned to prepare to leave.

State Emergency Service commissioner Carlene York urged people to be vigilant after a night of rescues, the majority being people who’d attempted to drive through flood waters.

“It is very dangerous out there on our roads and we are seeing a lot of flash flooding and obviously the rivers are still rising,” Ms York said on Sunday.

#FLOODWATER A reminder to all to NOT drive through flood waters. Lucky escape for this person down the southern regions of NSW, albeit their vehicle not as lucky.

“Communities in rural, regional and remote NSW; they’ll be on edge for the next few days while we wait for another big system to arrive,” Ms Cooke said.

“We are in for a long spring and summer in relation to wet weather conditions.”

Flood waters are predicted to affect inland NSW for months.

The Bureau of Meteorology’s Jane Golding said NSW could expect a series of weather fronts to pass through the state this season.

“We’ve seen totals far more than what we would normally see at this point in October,” Ms Golding said.

As of Sunday evening, evacuation orders were active for the Oura Beach Camping Area outside Wagga Wagga, the Western Plains Tourist Park at Dubbo, the Riverside Ski Park in Cattai, and parts of Agnes Banks and Lower Portland.

Four evacuation centres have been set up, including three in and around Sydney and a fourth in Dubbo.

Major flooding is occurring and expected across the state, including in Gundagai from Sunday afternoon and several locations along the Lachlan River.

In NSW’s central west, the Bathurst 1000 was marred by a series of crashes with conditions hampered by the torrential rain the area had seen.

Meanwhile in Victoria, heavy rain drowned out a wine and music festival on Saturday, with major flood warnings for parts of the state even as rain eased.

The post ‘Not a time for risks’: PM Anthony Albanese warns on floods appeared first on The New Daily.