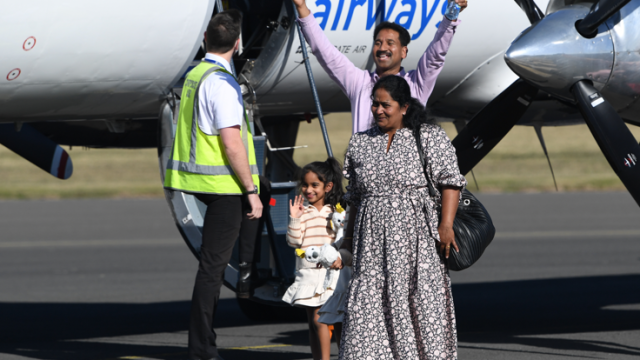 Prime Minister Anthony Albanese has opened the door for the Nadesalingam family to pursuie permanent residency after their four-year ordeal in immigration detention.

As Biloela residents welcomed home the family with a community celebration, Mr Albanese was asked on Saturday about the family’s prospects of obtaining permanent residency.

“Those processes will take place,” he told reporters in Sydney..

“The only way that it could happen is … the visa being issued, and then that application will go through. But I see no impediment to that occurring.”

A full weekend of celebrations is under way in the central Queensland town after Priya and Nades Nadesalingam and their daughters Kopika and Tharnicaa returned on Friday for the first time since being detained in March 2018.

The former Coalition government tried to deport the asylum seekers to Sri Lanka, but an 11th-hour court injunction saw the four held at the Christmas Island detention centre for two years, then moved to community detention in Perth.

Following the May election, the new Labor government gave the family permission to return to Biloela on bridging visas.

Mr Albanese described it as heartening to see the Nadesalingams regaining the semblance of a normal life.

The family were due to attend the Flourish Festival at the Biloela Civic Centre on Saturday afternoon before celebrating Tharni’s fifth birthday on Sunday.

Mr Albanese said a family with two young girls spending four years in detention was something that “Australia can’t be proud of”.

“We are a better country than that, we can do better than that,” he said.