Nick Kyrgios at Wimbledon: Can he win it? Yes, he can

Nick Kyrgios is within touching distance of Wimbledon glory, but the road is daunting

‘You are not alone’: Nick Kyrgios details mental health, drug battle on Instagram

A night with Nick: Let me entertain you

‘Send a message’: Kyrgios says Australian Open should be scrapped 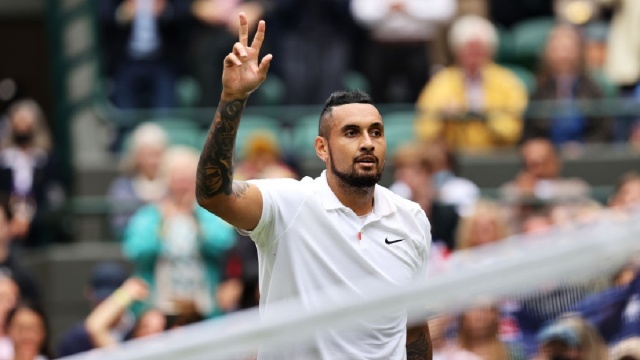 Deep in leafy and suburban south-west London later today, the world’s oldest and most prestigious tennis tournament tees off for the 135th time.

An intoxicating blend of high power and tradition, Wimbledon is careful also to fold with the times and lead.

Its banning this year of Russian and Belarusian players and the resultant curtailing of ranking points by the sport’s separate governing bodies has created headlines, if little more than a blip among the players.

Make no mistake, when it comes to tennis this is the biggie and it’s not just about prestige.

This year’s total prize money of $71 million is up a whopping 15 per cent on last year, with the men’s and women’s singles winners trousering a tad over $3.5 million each.

And should the Special Ks – Australia’s Nick Kyrgios and Thanasi Kokkinakis – snaffle the doubles crown as they did in Melbourne this January, then about $950,000 will flow into their bank accounts. Wimbledon matters on every score.

Pre play, this has already been a hugely successful Championships for the Aussies, with nine men and six women on the starting grid of the singles tournaments, six of whom came through the arduous, three-match qualifying event last week, Australia’s best result in 27 years.

So, looking good. Or is it?

Our 2021 women’s champion Ash Barty is gone, “wiped out, wants other challenges” and her departure leaves a void.

An Australian woman will not win Wimbledon 2022 but, madly perhaps, an Australian man might.

Nick Kyrgios is 27 years old and has never reached the last four of a major.

He turns out intermittently at best (just seven tournaments played this year), is world ranked 41 and is perpetually beholden to injury or implosion, pulling out of a tournament in Mallorca last week with an abdominal strain.

Kyrgios is an enigma, bathed in edgy fashion and ever-more-heavy inkings and looks more synched with the American basketball arenas he loves deeply ahead of the great tennis theatres.

He can be infuriating and a wastrel – his own worst enemy. But he is also, and arguably by some distance, Australia’s supreme tennis player on his day. He is a star who draws much support from beyond the game.

Remarkably, it is not so outrageous to suggest that given the right melding of circumstance and a mind focused purely on reaching the next round, the compelling Mr K could go all the way at Wimbledon in 2022. He has what it takes.

The cards are already falling well. The current US Open champion, Daniil Medvedev will not play (Russian and banned) nor will current world No.2 Alexander Zverev (injured).

The maligned reigning champ Novak Djokovic is oddly under the radar like never before and has played even fewer tournaments (six) than Kyrgios this year.

Rafael Nadal possess the renaissance powers of Lazarus when called upon but is weighed down heavily by a chronic left-foot injury. The king of clay, though, should we forget, can be outstanding on grass and has played five finals in London SW19, winning two.

The opening is comparable to when Lleyton Hewitt won Wimbledon 20 years ago, nipping into the narrowest of gaps between perhaps the two most supreme grass court players ever, a career-ending Pete Sampras and a career-beginning Roger Federer.

The early draw for Kyrgios is promising. Unseeded, he faces English wildcard Paul Jubb in round one tomorrow, a gimme, with his first major test likely to be fourth seed Stefanos Tsitsipas (Nick holds a 3-1 career lead over the Greek) in round three.

Aussie No.1 Alex De Minaur, Berrettini and, more ominously, Nadal (who leads Nick 6-3) are in the same half of the draw but while challenging, the route to the final for Kyrgios is doable.

Remember, tournaments twist and reshape as they progress. Think how the Special Ks redefined doubles in Melbourne this year, the two men slogging almost exclusively from the baseline to wholly change the narrative of a tournament initially mired in visa entanglement.

The accompanying circus – on court and off – was increasingly contentious, and whether Wimbledon shows such leniency, or cold feet, toward crowd and player behaviour as Tennis Australia displayed is one to watch this fortnight.

Ironically, it is the doubles that may distract Kyrgios most from his singles.

Physically and emotionally it is huge drain but there are positive precedents aplenty. Australia’s grand old man of tennis, Melbourne’s Frank Sedgman, won the singles, doubles and mixed doubles crowns here 70 years ago this northern summer.

Kokkinakis is in no doubt his great pal can shine this fortnight.

“He’s a legit contender. He looks great. He looks like he’s locked in. I had a look at his draw and I really like it for him,” Kokkinakis said.

“Obviously, slams are tough but with his game and how comfortable he is on grass and how many matches he’s played, I think he can definitely make a big run here. I’m pretty confident in that.”

Kokkinakis, meanwhile, will have an early shot at a glamour tie should he get past Poland’s Kamil Majchrzak today, with Djokovic his likely second-round foe.

Few players have been so afflicted with serious injury and surgery as these two to the extent that should onsite security install a metal detector of any sort, neither player would give much for their chances of making it through the All England Club gates. Expect a long tussle.

On paper, the Australian women’s hopes of making round two are mixed.

The top-ranked Ajla Tomljanovic, who made the last eight at Wimbledon 2021, kicks off against world N.23 Jil Teichmann, an awkward but not impossible task.

Wildcard Daria Saville, in splendid form in 2022, should make it past Bulgaria’s Viktoriya Tomova today, the winner facing Australia’s Zoe Hives, or more likely fifth seed Maria Sakkari in the second round.

Watch out for Melbourne’s Jaimee Fourlis who, in only her second main draw outside the Australian Open, faces Kirsten Flipkens, a former Wimbledon semi-finalist now ranked 257.

An amiable soul, 22-year-old Fourlis has had a resurgent past few months and sits at her highest ranking yet, 150.

A win would most probably bring a second-round tie against former Wimbledon champion Simona Halep.

Unfortunately for the Romanian, she is sat in a severely lopsided half of the draw that contains seven major winners including top seed Iga Swiatek and Serena Williams, back after almost a year’s absence from tennis.

The American 18-year-old Coco Gauff, (this author’s tip for the title) is also in this half.

The UK’s perennially injured Emma Radacanu, who won the 2021 US Open as an unseeded unknown, meanwhile lurks in the more sedate bottom half of the draw.

Gauff and Radacanu, what a final that would be.

This fortnight, though, is about more than just tennis.

The rambling Wimbledon Village, which perches high above the All England Club, is an intoxicating mix of rubber-necking and high glamour.

It is at its best in the first week of the tournament when today’s players and stars of yesteryear hand over fistfuls of dollars to local landlords to take over their homes for a fortnight.

Take a stroll along the packed village pavements and there’s a decent chance you’ll spot a star or two eating out or grabbing the groceries.

(My favourite sighting ever is that of a roller skate-powered Barbara Becker, Boris’s first wife, scooting through the village in hot pants and sunnies and being pursued by a couple of desperately out-of-condition Blues Brothers lookalikes who turned out to be her bodyguards.)

Despite its stuffy past, nothing is out of place at Wimbledon. It should be made for Nick.

The post Nick Kyrgios at Wimbledon: Can he win it? Yes, he can appeared first on The New Daily.