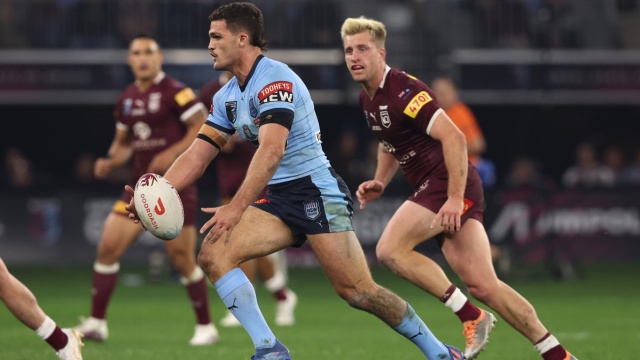 A Nathan Cleary masterclass has led New South Wales to a 44-12 win over Queensland in Perth to square the State of Origin series 1-1.

The star No.7 set up two tries, scored two of his own, nailed a perfect eight from the tee and caused Queensland constant grief with his kicking game to slowly wear down Billy Slater’s side on Sunday night.

The dominant victory followed an upset 16-10 loss in Sydney with NSW now chasing a win in Brisbane’s third game to seal the series from 1-0 for just the fourth time.

“There was unwarranted criticism (of Cleary) after the first game. But it shows what a champion player he is,” captain James Tedesco, who also praised Game Two call-ups Matt Burton and Jake Trobjevic, told the Nine Network.

Nathan Cleary is tonight's Player of the Match. 🙌

“He comes out in Game Two and puts on a clinic with a lot of pressure on him. He is one hell of a player.

“It will be a test at Suncorp (Stadium). It will be packed. Queensland fans up against the wall. We will enjoy the win tonight and then look at the next game.”

The Blues kept Queensland to 20 points or less for an incredible 14th consecutive game, the Maroons’ attack potent early but simply starved of opportunity.

Queensland enjoyed just 29 per cent of the territory and 41 per cent possession and had just six tackles in the Blues’ 20-metre zone compared to the Blues’ 33.

The Blues have done it, and done it well. 👏

Bring on The Decider! 😤

Tries to Felise Kaufusi and Cameron Munster, both set up by fullback Kalyn Ponga, put Queensland ahead 12-8 approaching halftime.

Kaufusi was the fall guy, his sin-binning coming just before To’o’s go-ahead four-pointer on halftime.

And while they didn’t cross again during the 10 minutes he was off the field, the hammering Queensland’s defence took eventually told.

Debutant Murray Taulagi dropped a towering Cleary bomb and the halfback then floated a pass for Daniel Tupou to score.

And soon after Burton stripped Dane Gagai of possession, Cleary scored his first Origin try in his 12th game.

He wasn’t finished, stepping through two defenders to notch a double and continue Queensland’s pain in Perth after a 38-6 loss at Optus Stadium on their previous visit in 2019.

“We dug deep for 10 minutes but it obviously took a toll on us in the back end of the game and when they have the ball too much, they score points,” Munster said.

“We were very poor tonight.”

Queensland winger Selwyn Cobbo was brought back to earth after the 20-year-old’s fine debut, unable to make an offensive impact and throwing in four errors.

Man of the match in Sydney, Cameron Munster was also blunted, twice having kicks smothered in the first half.