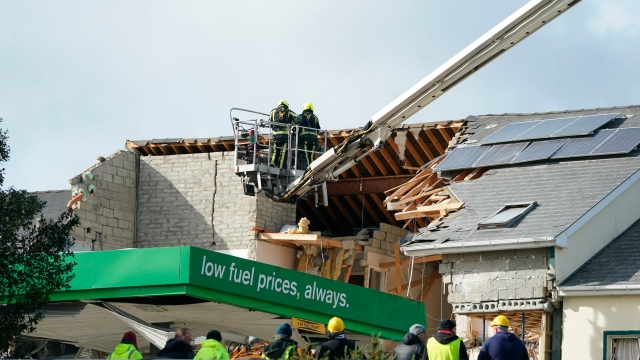 Irish president Michael D Higgins has attended the funeral for an Australian man who was killed in a service station explosion in country Donegal.

The funeral service for James O’Flaherty, 48, was held at St Mary’s Church in Derrybeg, Donegal.

Mr O’Flaherty was originally from Sydney in Australia but had been living in Dunfanaghy, just kilometres from Creeslough, with his wife and son.

Ten people were killed in Friday’s explosion at the Creeslough service station.

State authorities in Ireland continue to investigate the cause of the explosion in a building complex which included the service station, a shop and apartments.

It is being treated as a “tragic accident”.

A gas leak is one theory, it is believed.

At the funeral mass on Wednesday Father Brian O Fearraigh said the family of James O’Flaherty were not alone in their grief.

“I hope and pray that his wife Tracey, and his son Hamish, a very brave and a courageous young man, I hope that both of you find comfort and support not only in those who have joined you in the church here inside and the many outside as well, but those who have sent messages of condolence to both of you.

“The crowds that have gathered in the funeral home and the multitudes who lined the roadsides and who stood in silent prayer, standing, waiting and bowing when the hearse carrying James’s mortal remains passed by.

“Tracey and Hamish, I hope this is a source of strength and consolation to both of you.

“You are not alone in your sadness and grief, in your sorrow and your mourning.”

Two of the 10 victims – Jessica Gallagher and Martin McGill – were laid to rest after funeral masses in Creeslough on Tuesday.

The other victims were 50-year-old Robert Garwe and his five-year-old daughter Shauna Flanagan Garwe, who were in the shop to buy a birthday cake; 14-year-old Leona Harper; 39-year-old Catherine O’Donnell and her 13-year-old son James Monaghan; 59-year-old Hugh Kelly; and 49-year-old Martina Martin.

The other funeral services are to take place from Wednesday to Friday.