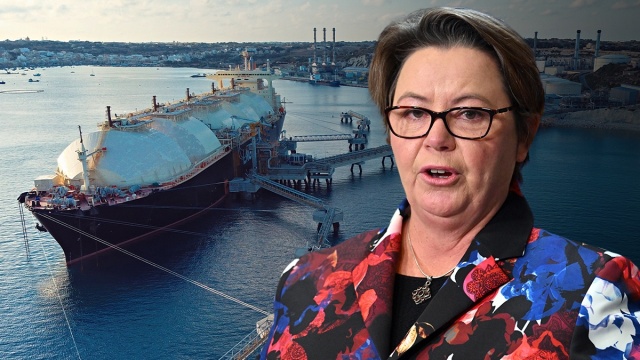 A federal minister has joined calls for curbs on “insane” power prices, angrily comparing gas companies to a “swarm of locusts”.

The unflattering analogy comes on the same day a major union expressed outrage at another minister for a recent deal with gas exporters it branded a “dud”.

Warnings of an impending 35 per cent hike in surging household power bills are driving calls for action within the government, and have been seized upon by the Opposition.

A recent report by the ACCC found the majority of gas extracted in Australia was locked up in export contracts.

Since the war in Ukraine that has left Australian consumers paying surging international prices, two to three times greater than usual, for gas produced here.

“Lower input costs are crucial, and the gas companies are being told this regularly by myself and others, and they don’t seem to have picked up the lesson.

Mr Husic said about 566 petajoules of gas was needed to supply households and manufacturers but 4300 petajoules were being sent offshore.

“We have the supply,” he said.

“We can do this here. We can meet our needs.”

The comments come as one of the country’s largest unions decried the government’s inaction.

But the Australian Workers Union has questioned the worth of a deal enforceable by a voluntary code of conduct when root causes of high prices have not been addressed.

“I can’t believe this is apparently a head scratcher for Labor. It’s time to actually walk the talk.”

The sky-high prices give the government “zero chance” of following through on plans to revitalise Australian manufacturing, Mr Walton said.

The government has to follow the example set by the conservative government in the United Kingdom and called for by Teal independents and economists such as Nobel Prize winner Joseph Stiglitz to enforce a mechanism that will bring down prices, he said.

“It’s not even like the government has to do anything remotely brave.”

Despite some suggestions of a widening split between the wings of Labor representing workers who use gas for industrial purposes and those employed in the resources sector, ministers have been talking up the prospects of unified action.

Gas prices strongly influence the price of electricity, which is expected to jump by up to 35 per cent or more in the coming year. (The price of gas alone could surge at an even higher rate).

Energy policy guru Tony Wood from the Grattan Institute believes a windfall tax on profits from any sales made too far above the long-term average price of gas (before the war) would be a neat way of keeping prices in check.

Labor ruled out any new taxes in the current Parliament at the recent election.

The New Daily understands there is less support within the government’s senior ranks for direct controls on prices.

More to be done

Treasurer Jim Chalmers, in Washington for talks on the global economy, on Tuesday said there was support for revising industry regulations.

“All of those ministers recognise that the way that our gas industry regulation is set up has not been delivering the kinds of outcomes that we want to see,” he said.

“There is more that governments can do, and there will be more that we do.”

Former prime minister Malcolm Turnbull established the main alternative measure for regulating the market: The so-called gas trigger, or controls that would limit the export of gas for profitable sale overseas to ensure adequate supply for the Australian market.

Mr Husic said the mechanism was “not proving useful at all” in any bid to rein in prices.

(Mr Turnbull has called for eastern states to follow the lead of Western Australia and reserve gas supplies locked up in long-term export deals to tame a rampant market.)

Deakin University law professor Samantha Hepburn said the way in which regulations applied to the gas industry needed to be re-evaluated.

“They’re [currently] simply saying: ‘OK, exporters you behave, and you make sure we get it if we need it’,” Professor Hepburn said.

“You can’t simply have carte blanche to export everything offshore. There must be more robust mechanisms to evaluate public interest.”

A spokesman for Ms King said the government was committed to ensuring affordable, reliable and secure energy supplies, and said the minister was working with her colleagues on policy options.

“We recognise the domestic market we inherited from the former government has not been delivering the kinds of outcomes we want to see,” the spokesman said.

“The minister has always been supportive of the AWU and the work it does to represent members and workers in the gas industry.”

The post Minister takes angry swipe at gas companies as pressure builds for action appeared first on The New Daily.