Michael Pascoe: The parable of the moussaka – challenges drive productivity

How high will interest rates go? It depends on how much we spend

Why some economists believe the Treasurer is being too pessimistic

Alan Kohler: The Reserve Bank is a renovator’s delight

‘Dangerous’: ATO hands out $5.7 billion in tax refunds in July as inflation soars

The Reserve Bank will face a major review. Here’s what that means

Michael Pascoe: ‘Everyone’ was wrong about wages – and they may be again

Labor is holding a jobs summit in September. Here’s what it hopes to achieve

Euro on the brink of breaching parity with the US dollar

Fruit and vegetable prices soar at Coles and Woolworths: Study 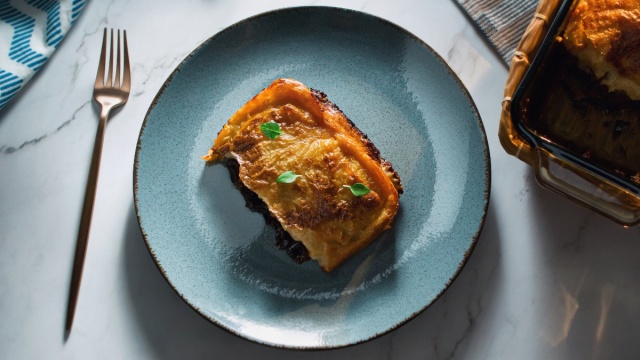 For most of us, it’s in our nature not to do much more than we need to do to be comfortable. Inertia is a powerful force.

Which is why it sometimes takes difficulties and challenges to force us to change, to do more than we have been comfortable doing, to drive innovation.

And that is why the “problem” of a shortage of desirable workers or the need to pay employees more, is not necessarily as bad as the usual self-serving lobbyists make out.

In the big picture, it can result in greater investment and improved productivity, along with the Darwinian aspect of the least healthy failing.

The threat that higher wages lead to fewer jobs might seem obvious, but the obvious isn’t always correct in economics.

And the submission warned of the publication bias:

(Treasury econocrats have a history in long, detailed reports of quietly slipping in a few facts that the political masters of the day might not appreciate. The previous government’s FWC submission was 108 pages long.)

That’s all fine economic theory at the macro level. It doesn’t get much of a run at the micro level. That’s what gets more coverage, filling news bulletins and newspaper columns with claims that small businesses will go broke if the wages bill increases.

The nature of capitalism

Some small businesses do go broke. Some always go broke, as do some medium and large businesses. That’s the nature of capitalism, in the very design of competitive, evolving markets.

The idea of setting economic policy to suit the least-efficient marginal small business operator is simply absurd, yet that is the idea we are regularly presented with. Do that and productivity starts going backwards.

A business that is unable to survive using that mix probably wasn’t going to be long for this world anyway. If a business can’t become more efficient or has no profits in which to absorb costs, or has such a weak offering that its clients aren’t prepared to pay more for it, it’s not viable.

Other, better businesses will pick up the customers the unviable business drops and the resources of the failed business will be freed up for others to use. That’s especially the case with employees in this time of a shortage of skilled labour.

At the same time, the adaptability of businesses should not be underestimated. For example: the parable of the moussaka.

The parable of the moussaka

There is a Greek restaurant I am fond of, a good business run by a savvy family. I developed a craving for moussaka a while back, pulled up a chair and could not believe moussaka had disappeared from the menu.

It had been taken off because of the shortage of kitchen staff – good moussaka takes too long to make, it was explained to me, too much time preparing the eggplant.

The proprietor might not frame it as increasing productivity, but that’s what the missing moussaka represented during a labour shortage.

At some stage when there are more cooks and customer demand is such as to justify a higher price for moussaka, it will be back. Or it won’t – but this restaurant will continue to do well.

That might seem a particularly silly and small example, but it’s the combination of many such small examples that increase national productivity and our ability to pay higher wages and improve living standards.

And it’s no surprise that the innovative and adaptable keep innovating and adapting. The proprietor in the parable of the moussaka also has developed his own smartphone app for taking orders in the restaurant. It seems to work very well.

It was a feature of the Coalition government to focus, at least in its rhetoric, on the small business sector. That was the base Scott Morrison kept hammering. Peter Dutton shows signs of continuing the theme of “the Liberal Party is the party of small business”.

Like the myth that the Liberals were the best money managers, constant repetition of various self-serving claims about the importance of small business have not made those claims necessarily true.

Small business – those employing fewer than 20 people – is an important sector of the economy, but not more important than large, medium or government business.

And an interesting footnote in the minimum wage case submissions was an indication of how the importance of small business is getting smaller.

In response to the government’s submission, the FWC asked if the significance of small business to employment had declined over time and, if so, what might have been driving the trend?

Treasury responded that small businesses accounted for 53 per cent of private-sector employment in 2006-07, but that had fallen to 41.3 per cent in 2019-20. Treasury had not analysed why.

Throw in the public sector and small business accounts for about a third of employment – important, but you wouldn’t want to base your economic policy on whatever it takes to keep the marginal small business happy.

The post Michael Pascoe: The parable of the moussaka – challenges drive productivity appeared first on The New Daily.