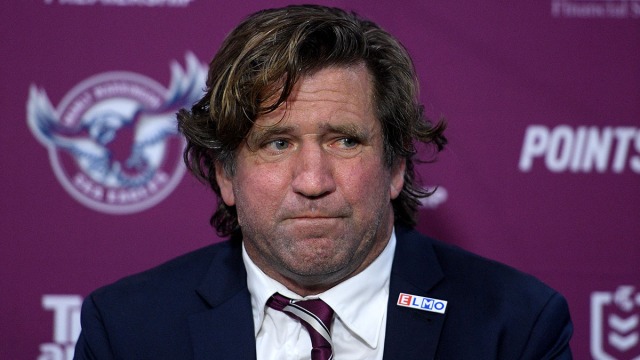 Manly could face a battle on two separate fronts after one of the most dramatic periods in its recent history ended with the sacking of coach Des Hasler.

Hasler received his marching orders from the Sea Eagles on Thursday, axed with a year to run on his contract and ending a 559-game association with the club as a player and coach.

Anthony Seibold is expected to be announced as his replacement imminently, with the players due to return for pre-season training next month.

The news of his sacking brought to an end months of speculation over Hasler’s future, with the club losing their last seven games of the season following the saga surrounding their pride jersey.

The disastrous run-in meant Manly missed out on the finals and Hasler failed to satisfy a clause in his contract that would have triggered an automatic extension for 2024.

“After careful consideration, the board of the Manly Warringah Sea Eagles has today unanimously decided that, in the best interests of the club, Des Hasler will not be head coach of the club for NRL season 2023,” owner Scott Penn said.

“The board and the club would like to acknowledge Des and his long history with the club as a player and as a coach.

“We are grateful and appreciative to Des for his dedication to the club, the team, all of its supporters and the sponsors over a long period of time.

“Des will always remain an icon of the club and an integral part of the club’s history.”

The situation reached critical mass this week when Penn claimed the Sea Eagles needed a football department fit for a “premiership-winning team”.

One issue for Manly could be keeping that team happy, with Hasler’s exit threatening to have a negative ripple effect on the playing group.

Fullback Tom Trbojevic has already scheduled a meeting with his management for Friday afternoon, after concerns were expressed over the club’s plight.

He and brother Jake share the same management company as Hasler, and are contracted to Manly until the end of 2026.

The Sea Eagles could illafford to lose the pair, one a Dally M Medal-winning fullback and the other a 15-time NSW State of Origin representative forward.

There could also be a final battle looming between Hasler and Manly.

In a statement on Thursday night, Penn said he and the club were in discussions with the coach and his management to reach an “amicable resolution” on the final year of his contract.

Hasler launched legal action against Canterbury in 2017 when he was axed by the Bulldogs, and a similar situation is not out of the question.

His sacking leaves questions over whether he will coach in the NRL again.

His overall win-record stands at 56.3 per cent, and while he took Manly to the top four last season with Tom Trbojevic fit and firing, they fell away without the fullback this year.

For Seibold, the situation offers a second chance at life as an NRL coach after he exited Brisbane during its horror 2020 season.

Currently an assistant to Eddie Jones with the England rugby union team, he was Dally M coach of the year in his first season at South Sydney in 2018 before things came crashing down at the Broncos.

The post Manly could count the cost of sacking coach Des Hasler appeared first on The New Daily.