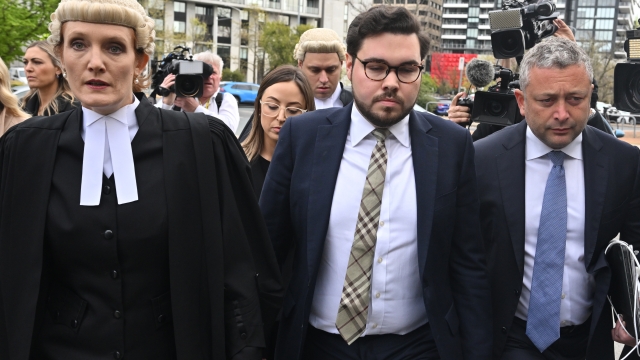 The criminal trial for the man accused of raping Brittany Higgins is continuing in her absence.

Bruce Lehrmann has pleaded not guilty to sexual intercourse without consent.

Ms Higgins is due to finish being cross-examined by Lehrmann’s defence lawyer Steven Whybrow after her version of events was put to the jury in the trial’s first week.

The court has prevented publication of any evidence until after Ms Higgins has returned and completed her evidence.

The pair had been working as ministerial staffers for Senator Reynolds.

Sharing a taxi to their respective homes, Ms Higgins said Lehrmann told her he needed to collect some work documents from Parliament House on the way.

After falling asleep on a couch in the minister’s office, Ms Higgins alleges she woke up to Lehrmann having sex with her and says she told him to stop.

Mr Whybrow has put several inconsistencies in Ms Higgins’ story during his cross-examination, including that she created a timeline of events to distribute to the media.

Ms Higgins said the dossier was created for the police when she reopened her complaint, but admitted it had also been distributed to journalists.

Mr Whybrow also pressed Ms Higgins on why she had deleted some text messages and photos from her phone before handing it to police.

She told the court she had cleared her phone of photographs showing her holding alcohol or with politicians.

But she denied she had done so to mislead officers investigating her allegations, but rather to purge her phone of “horrible parts” of her life.

The trial is expected to run for at least another five weeks.

The post Lehrmann’s trial continues without Higgins appeared first on The New Daily.