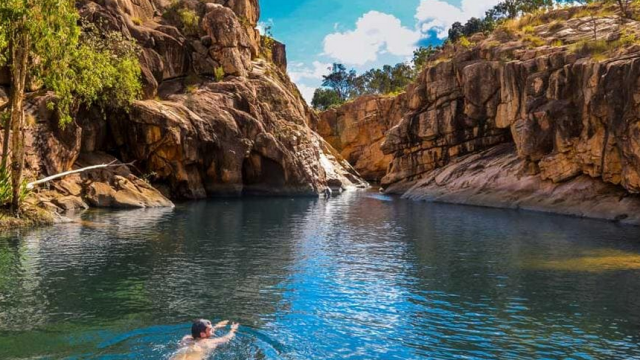 The Commonwealth is immune from criminal prosecution after allegedly illegally disturbing an Aboriginal sacred site at a former movie set in Kakadu National Park, a court has determined.

Traditional owners are devastated and the decision has serious implications for the protection of sacred sites in the Northern Territory, the Aboriginal Areas Protection Authority says.

NT Attorney-General Chansey Paech said Parks had “flagrantly” carried out the uncertified work at Gunlom – a cascading waterfall that appeared in the movie Crocodile Dundee.

AAPA filed a criminal charge against the director of Parks Australia in 2020 for doing the work. It alleges Parks built a walking track in 2019 to Gunlom’s top pools without permission from the Indigenous custodians.

Parks agreed to remove the offending section of track and apologised to traditional owners for the distress the work caused but pleaded not guilty to the charge.

It told a full bench of the NT Supreme Court in March it cannot be prosecuted for carrying out the unauthorised work because it’s a corporate entity, and the criminal offence and penalty in section 34 of the NT’s Aboriginal Sacred Sites Act doesn’t apply.

On Friday, the court agreed, saying the director of Parks has “the same legal status as the executive government of the Commonwealth in relation to the imposition of criminal liability” and is generally immune from prosecution.

AAPA chief executive Sophie Creighton said the decision has serious implications for the protection of sacred sites in the territory.

“It is staggering that the Commonwealth has spent years and thousands and thousands of dollars to argue for the right to ignore custodians and damage sacred sites,” she said in a statement.

Dr Creighton said the decision was “immensely disappointing” for the Aboriginal custodians of the Gunlom sacred site, the authority and citizens interested in preserving cultural heritage.

“The next generation of custodians have been told that despite the NT having the best legal protection of sacred sites in Australia, the laws do not apply to everyone,” she said.

“This is not joint management. This is deeply disrespectful and arrogant,” he said.

Mr Paech, who is also the NT’s arts, culture and heritage minister, said he respected the decision but was “disappointed and saddened” by it.

“The director of National Parks flagrantly carried out works at Kakadu’s Gunlom Falls in 2019 without taking into account consultations with the traditional owners, or any engagement with the AAPA,” he said.

“That conduct disregarded the Northern Territory Aboriginal Sacred Sites Act 1989 and the protections it creates for sacred sites.”

He said the NT government would work with the Commonwealth to explore legislative changes to ensure stronger protections for heritage sites.

AAPA previously alleged the track was constructed close to a restricted ceremonial feature against the wishes of the World Heritage-listed park’s traditional owners and without an authority certificate, which is issued after consultation.

Parks has since obtained a certificate and negotiated with traditional owners about the realignment of the track.

“Part of the track has now been removed and work commenced this week on the new segment of track,” she said.

“I take the concerns raised by traditional owners about the Gunlom matter very seriously and Parks Australia has taken steps to ensure (they) are properly consulted on infrastructure work in Kakadu.”

The case was never about the walking track but rather to find out if the Parks director could be prosecuted under NT law.