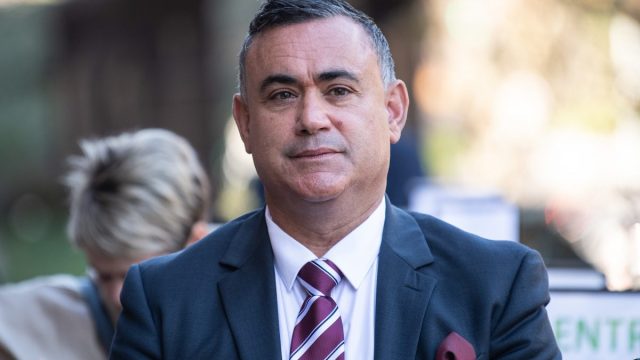 Former NSW deputy premier John Barilaro could be blocked from taking up a taxpayer-funded job in New York City until a parliamentary probe into the appointment is completed.

Labor will launch an inquiry into Mr Barilaro’s appointment to the $500,000 trade role in New York City amid claims of “jobs for mates”.

Last week the state government announced Mr Barilaro had been appointed NSW’s senior trade and investment commissioner to the Americas, one of six roles the ex-Nationals MP created while trade minister.

Labor upper house leader Penny Sharpe said she would move a motion in parliament on Wednesday to halt the appointment until an inquiry had been completed and reported its findings.

Documents show during the recruitment process four people were considered for the NYC-based role before two were shortlisted.

One applicant, Jenny West, was told in August by then-premier Gladys Berejiklian she had the job, The Guardian reported on Wednesday.

Ms West was later told the offer had been rescinded and was paid a substantial settlement, The Guardian said.

Mr Barilaro resigned from parliament the following month, days after the resignation of Ms Berejiklian.

The parliamentary inquiry will investigate if a deal was done and will scrutinise the work done by recruitment businesses to fill the roles, with the possibility Mr Barilaro could be called to give evidence.

“I am genuinely surprised that it didn’t go to cabinet,” Ms Sharpe said on Wednesday.

“I can’t believe that and they thought that they could just sort of sneak it out, and no one would notice.”

Premier Dominic Perrottet said he would take action if there “were not good reasons” behind decisions made about Mr Barilaro’s appointment.

“The advice I’ve received is that an independent recruitment process took place,” he told ABC on Wednesday.

Mr Perrottet said he was happy for details of the appointment to be made public, adding it was “certainly in the interests of transparency”.

“This was a process that was run by the NSW public service and as premier of the state I didn’t need to be in this decision,” he said.

“As long as the process was followed, and there were good reasons behind the decisions, I’ll be satisfied with that.”