Kirstie Clements on the enduring style of Queen Elizabeth II

Kirstie Clements: Channelling Kim Kardashian for my own version of the Met Gala

A wardrobe essential I won’t live without … and, no, it’s not blue jeans

Kirstie Clements: Packing for travel and the eternal quest for the carry-on wardrobe

Kirstie Clements: ‘Jorts’ – the fashion trend that literally no one looks good wearing

Kirstie Clements: How to save money on fashion and still look great

Paypal Melbourne Fashion Festival to launch with Welcome to Country

Kirstie Clements: Believe it or not, gumboot chic is on the rise

Barramundi industry hooks into fashion in effort to slash waste

Kirstie Clements: Enough of the in-crowd. Give me real creativity and cleverness

Kirstie Clements: Paris shows are coming to their senses, after a fashion. Pity about the horse

Kirstie Clements: The cure for those fashion blahs? Chart your own style path

From fashion designers to farmers, women are transforming the cotton industry

Quality over quantity: The ins and outs of creating a capsule wardrobe

McDonald’s dips its toe into swimwear with Budgy Smuggler range

Kirstie Clements: Time to analyse the fashion of this iconic series reboot

Kirstie Clements: The top style trends of a pandemic-tinged 2021

What is sustainable when it comes to fashion? Europe's new laws rate synthetics over natural fibre

The zany looks from the 2021 AMAs red carpet

Has the pandemic changed the way we dress for work?

Kirstie Clements: Tattoo trends are well and good, but do take a dictionary

Kirstie Clements: Hooray for weddings, and the excuse to dress up 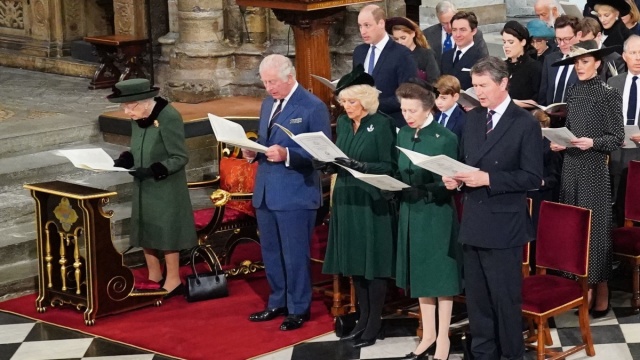 Not in any way to diminish Queen Elizabeth II’s extraordinary legacy in terms of her public service but she also leaves a legacy of style that we may never see again.

I have always been baffled if anyone referred to the Queen’s style as frumpy or dowdy because, to me, she was always glamorous and appropriate.

I recall staring at her portrait in my classroom every day as a young girl, especially focused when we were asked to sing God Save the Queen.

In my memory she was dressed in a pale blue lace gown, wearing a glittering crown and sparkling jewels, and I thought she was the most beautiful person I’d ever seen.

As the television series The Crown reminded us, Elizabeth was very striking in the early days: the military style tailoring she adopted during the wartime years, the full-skirted couture looks that accentuated her tiny waist in the 1950s, (there is an iconic photograph of a young Princess Elizabeth dancing in Canada in a very chic felt skirt and blouse) neat coats and dresses with matching and very fashionable hats, a classically elegant look she owned in the 1960s.

While her sister Margaret was considered by many to be the more glamorous of the two, Elizabeth certainly held her own.

When she was in her 20s, Princess Elizabeth began working with British fashion designer Norman Hartnell and her satin, tulle and lace gowns were often paired with Hollywood-perfect white fur stoles, gloves and diamond tiaras.

Hartnell also designed her iconic wedding dress and the spectacular gown she wore for her coronation.

She later moved onto designer Hardy Amies, establishing a style that consisted of monochrome colour – her hat, coat and dress often in a matching tone.

The look was often accessorised with a pearl necklace of either one or two strands, pearl button earrings and a jewelled brooch, sensible pumps and her ubiquitous Launer black patent handbag held in the crook of her elbow.

While her outfits were not particularly fashion-forward they had a quiet charm about them, a colourful optimism that was constant and somehow reassuring.

I particularly loved her off-duty look which was so quintessentially English, the patterned silk headscarves over her shampoo and set, tied under the chin, the Balmoral tartan kilts, the sensible cardigans and wellington boots.

Of course, Queen Elizabeth had the luxury of a personal dresser and the team of palace staff at her disposal, but she always looked professional, formal but not formidable.

Across decades of tumultuous change, politically and socially, she knew exactly how she wanted to be perceived and her style reflected this.

In her later years, the Queen began to wear a series of floral long-sleeve dresses, which were presumably easy to wear and had a pretty modernity to them.

The impeccable coat and hat she wore to the memorial service for her husband Prince Philip was also memorable, a dark sage green coat and hat, trimmed with black velvet, and with a large black velvet collar. Demonstrably sad, and frail, her visual message was still that of elegance and propriety. Something that is very sad to lose.

The post Kirstie Clements on the enduring style of Queen Elizabeth II appeared first on The New Daily.