Integrity Bill earmarked for next month 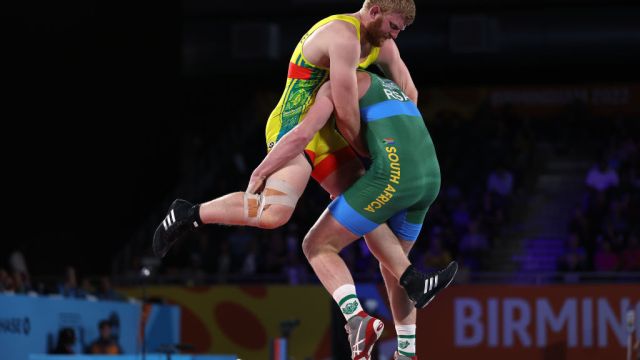 Jayden Lawrence has edged a classic battle for bronze to end Australia’s 12-year wrestling medal drought at the Commonwealth Games.

The 27-year-old Camden wrestler had to hold on to his young South African opponent Edward Lessing’s leg for grim life in the denouement to the Friday’s bronze-medal bout in the 86kg freestyle event at the Coventry Arena simply to cling on to his 12-11 triumph.

After winning, Lawrence, in his third Games, lay exhausted on the mat, head in hands as he celebrated becoming the first Aussie male wrestler to win a Games medal since Delhi 2010 when Ivan Popov won gold in the men’s 120kg Greco Roman event.

Emily Bensted took silver in the women’s 55kg freestyle and Hassan Shahsavan also won bronze in those Games in India.

Lawrence, who’d earlier outclassed Singapore’s Weng Chow 10-0 before finding Pakistan’s Muhammad Inam too much of a handful in an 8-3 defeat, made a sparkling start to his bronze-medal bout, putting 21-year-old Lessing under immediate pressure.

In an eventful first three minutes, the pair scored freely with the Australian pouring ahead with a four-point throw to lead 11-6 at the break.

But when 12-6 ahead, Lawrence, a qualified cabinet maker who’s also a wrestling instructor at a club in southwest Sydney, had to survive a ferocious comeback as the South African reduced the arrears to just one point and felt he was unlucky not to be awarded a levelling point.

He was still in the ascendancy in the final seconds looking for the two-point manoeuvre that would have won him the medal but Lawrence just about held on.

Earlier, six-time national champion Irene Symeonidis also had a chance of winning a medal in the women’s 57kg class but the 30-year-old IT specialist from Melbourne was soundly beaten 10-0 by the brilliant 18-year-old Sri Lankan  Nethmi Poruthotage.

It ends the prospect of a thrilling head-to-head battle with fellow Australian Eleanor Patterson.

The Tokyo Olympics silver medallist only needed one jump in Thursday’s qualifying round to book her spot in the final.

Afterwards, Olyslagers was diagnosed with the inury to her right calf muscle.

“It’s both disappointing and devastating not to be able to compete in the women’s high jump final,” the 25-year-old Olyslagers said in a statement.

“What was thought to be a tight calf after my qualifying round turned out to be a torn muscle in my jumping leg.

“Of all the emotions and shock I could feel in the moment, I still have peace.

“Winning bronze at the Commonwealth Games four years ago allowed my professional career as a high jumper to begin, it was a competition that changed the trajectory of my life.

“My prayer is that someone else’s dream comes alive tomorrow as I cheer them on from the sidelines.

“Let’s go cheer Eleanor on as she jumps for Australia so well out there.”

Newly minted world champion Patterson will now be the unbackable favourite to win a second Commonwealth title, having previously claimed gold as a teenager at the 2014 Glasgow Games.
The final is at 1017 local time (1917 AEST) on Saturday.

The post Jayden Lawrence grips on for Australia’s first wrestling medal in 12 years appeared first on The New Daily.