Injured Shayna Jack out of world titles in Hungary after fall

Shayna Jack to return to swimming after drugs ban 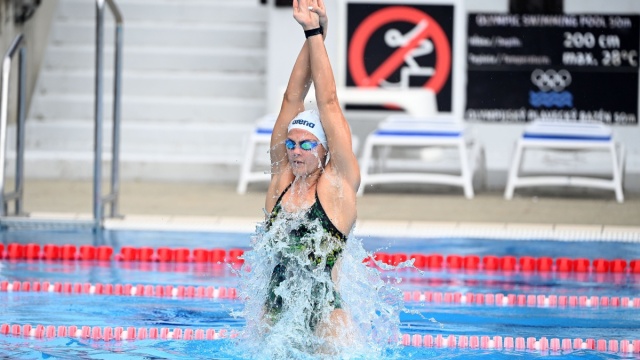 Australian swimmer Shayna Jack’s world championships are over after she slipped and broke a hand in a warm-up area.

Jack had collected gold and silver medals in relay events ahead of her scheduled individual swims at the world titles in Budapest.

But the 23-year-old, on return to international competition after a two-year doping ban, was hurt in a freak accident on Wednesday.

“I’m broken-hearted to announce that I have to withdraw from the rest of the competition and that I won’t have the opportunity to achieve everything I wanted to,” Jack posted on Instagram.

“I am still so proud of what I’ve achieved, how far I’ve come with the amazing teammates I’ve been able to medal with.”

Australian swimmer Shayna Jack has withdrawn from the world championships in Budapest after breaking her hand during a training session, she said on Wednesday. https://t.co/4pbXGRqEsc

Jack said she broke a hand “due to an unfortunate incident in this morning’s training session”, slipping in a warm-up area.

The Australian was due to swim the 50m and 100m freestyle events after earlier making a successful return to international racing.

Jack was part of Australia’s gold medal-winning 4x100m freestyle relay on the opening night of competition and added a silver medal as part of the nation’s 4x100m mixed medley team.

Jack said she would now turn her attention to competing at the Commonwealth Games in Birmingham starting July 28.

“As I always do, I turn my focus to the future and that is the Commonwealth Games,” she posted.

“Starting this afternoon I will be back in the pool for a kick session.”

Jack was banned for two years just before the last world championships in 2019 after traces of a banned substance were found in her system.

She was initially suspended for four years but the ban was reduced to two years.

The Queenslander has maintained her innocence of performance-enhancing doping, admitting she didn’t know how she tested positive to the banned substance Ligandrol.

The post Injured Shayna Jack out of world titles in Hungary after fall appeared first on The New Daily.