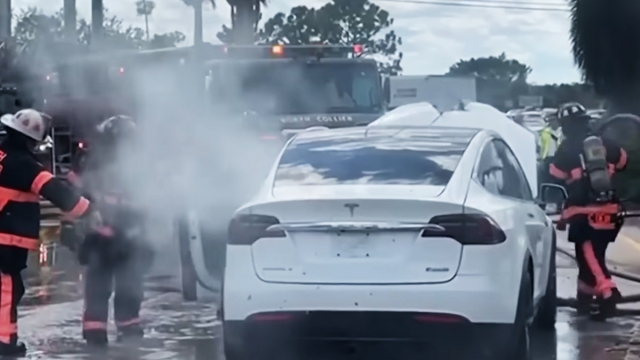 Eco-conscious Floridians are having a rough time.

Hurricane Ian, with sustained 241km/h winds, made landfall in south-west Florida as an intense Category 4 hurricane on September 28.

The storm resulted in significant flooding, damage and at least 119 deaths across Florida.

Not only are they dealing with the massive destruction left by Hurricane Ian, but now they have to contend with their Tesla electric vehicles (EV) exploding into flames.

Florida has 95,000 registered EVs, according to the US Department of Energy.

In the city of Naples in Florida alone, there have been four reports of Tesla fires since Hurricane Ian.

It’s being reported that the mixture of electricity and salt water is causing the batteries in waterlogged vehicles to corrode, resulting in fire.

Putting out the flames isn’t simple.

First responders say vehicles reignite even after the initial fire has been put out. It means firefighters have to attend fires at the same location multiple times.

“That’s a new challenge that our firefighters haven’t faced before. At least on this kind of scale,” Florida State Fire Marshal Jimmy Patronis wrote on Twitter.

“It takes special training and understanding of EVs to ensure these fires are put out quickly and safely,” Marshal Patronis said.

A lot of water and foam is needed to extinguish an EV fire.

According to Tesla’s emergency response guide, extinguishing an EV fire requires 1368 to 36,369 litres of water.

A fire in a petrol-powered vehicle requires about 4546 litres of water to extinguish.

NBC says firefighters used 127,290 litres to put out the fire that killed two people driving a Tesla in 2017.

Batteries in Teslas are located underneath the body of the car, so when vehicles were covered by surging salt water during a once-in-a-century storm, the lithium-ion batteries started to corrode.

The energy stored in these batteries doesn’t dissipate over time.

“Just because the vehicle is submerged doesn’t mean the energy is discharged in any way,” he said.

“Any time you mix electrical components and salt water together, it is a recipe for disaster.”

But according to experts, petrol vehicles are much more likely to burst into flames than electric vehicles.

Not a spark of truth

It’s not the first time there has been a surge in interest in stories involving EV batteries.

There was a viral post doing the rounds on Facebook in July claiming that electric vehicles posed a serious danger because fires in their batteries can’t be put out with water.

But there’s not a spark of truth to the claim.

Neeraj Sharma, an associate professor of chemistry at the University of NSW with a focus on improving battery technology, said the claim is false.

“Water itself isn’t a bad thing. You can use it to put out the flames of an EV fire.”