Creativity ‘at its best in the face of adversity’: agency execs on navigating the throes of inflation

Is it ever OK to use profanity in advertising? 4 industry execs reveal their candid thoughts

Is it ever OK to use profanity in advertising? 5 industry execs reveal their candid thoughts

A year on from consolidating his agencies under a single network, Ben Lilley’s Hero is now fully operational as a single integrated agency with one P&L.

In less than two years, Lilley has put McCann and his other agencies including Red Republic, Smart and BBE among others through a significant transformation with the help of former OMD and Mindshare CEO, James Greet, who joined on a full-time basis earlier this year.

Lilley took private ownership of the legacy agency he led in Australia for the best part of a decade in 2020. He says that while it was a unique opportunity, a bigger one was realised in adding an integrated offering to the scale that McCann already provided.

“That’s why we then embarked upon the additional kind of acquisitions in other areas outside of just traditional creative agency land,” he says.

Under the brand proposition of ‘Borderless Creativity’, Hero has bet big on integrated creativity, technology and media.

While Lilley spoke at the start of the year about how McCann had become “pitch fit”, he says there is now “greater clarity” around the offering, and the singularity of the offering, in terms of what the business is pitching now.

“It was a group a year ago, which is not as easy to pitch, frankly,” he explains. “Whereas now it has clarity in that integrated agency offering.” 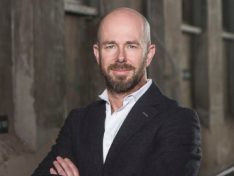 Hero, the agency, has come as a result of Greet and Lilley consulting with clients and “industry luminaries”, allowing them to realise the ideal post-pandemic agency was not just about having integrated specialities. Instead, it was “very much about having a genuinely integrated singular agency offering.”

“More recently and more broadly, what we’re seeing a lot of is really the rise of what I call the ‘mega-mergers’. That’s where you’ve taken the traditional, often heritage creative agency, and then merge it with the more recent, what was known as the digital agency or even the CX agency, whatever it might be, and all of a sudden you end up with an agency that’s called ABCD-EFG.

“What a lot of the big groups are calling integration, we don’t see as integration, because all it is is taking the letters from the creative agency side, and then the letters from the technology or digital agency side, and you bung them together. It doesn’t mean it’s going to work. A lot of these mega-mergers are still two agencies under one roof.”

Lilley believes that Hero has been able to bring together the “holy trinity” of creative, media and technology at scale successfully. He believes that is currently unmatched in the independent sector. The pair say Hero delivers the ‘holy trinity’ of media, creativity and technology

“In particular, that sort of holy trinity is where we’re having the greatest success with bringing on new clients, but also with the campaigns and the clients we’re working on,” Lilley says.

Greet adds that the move from a group to integrated agency came from the simple rationale that many of the ‘mega-mergers’ they were seeing weren’t resulting in genuine integration.

As in independent with scale however, the pair say they found themselves in a position many of the modern integrated agencies are not afforded.

“Unfortunately, most of these groups don’t, certainly locally, have the privilege or the time to be able to blend them into something better. So you end up with what we call ‘Frankenstein agencies’,” says Greet

The only way to do this successfully, he explains, is to break down the old individual companies, align them around a single shared vision, then reengineer “the elements of the business from the ground up to be able to deliver it in a way that is fit for purpose”.

In doing this, Hero wanted to create a fully “borderless” agency across each of the markets. “The only way we could make that work was removing that light P and L sensitivity, because then it all just becomes about the client,” Greet adds.

Lilley says that there are “hardly any” of the traditional agencies left, however the consolidation under the ‘Hero’ name would certainly make some question whether the McCann brand in Australia will follow the same fate as J Walter Thompson and George Patterson Y&R.

McCann, one of the last few remaining legacy names, according to Lilley

When asked if the brands under the umbrella still exist, including McCann, The Red Republic, BBE, Smart, JSA Creative and Engine Room Productions, he says the legacy brands Hero brought together are now like “shop fronts that some clients still like to come in through”, and that they wouldn’t kill off the brands they have acquired, as “in some instances they may serve a purpose”.

“So if a client still specifically does want that dedicated offering with a particular skill set, they come in through that way. But they are kind of sitting behind legacy brands because we had taken all the best of those pieces and brought them together into the national integrated offering.

“We wouldn’t kill off the McCann name because McCann is the world’s single biggest creative agency, business and brand, and that comes with all sorts of benefits for the clients in Australia who do want access to that global agency and the global network, as does the relationship with IPG as well.

“What we consider we bring now is very much the best of both worlds. We do have the global reach and global network for clients who require that, but we bring the very best of all the things that come with being an Australian local, independently run agency, where the clients get to work with the people who own the agency.”

Greet has spoken previously about the creative and media divide, questioning how many media agency professionals had stepped foot inside a creative agency, and that since ‘media’ was created, over the last 30-40 years, it has gotten very good at figuring out how to keep the majority of clients media spend from actually escaping the four walls of the media agency.

Ten years ago, a month after his agency Smart was merged with McCann, then CEO Ben Lilley told Mumbrella that the traditional agency model “is dead” and that there was no future for them in the Australian market.

When asked to revisit that statement a decade on, with McCann now a ‘shop front’ to his new agency, Hero, Lilley confirms his past prediction.

“I would say, yes, that the traditional agency absolutely has died because it’s not enough to be a traditional standalone creative agency. You can’t say, ‘oh yeah, we do digital as well.’ Everything’s digital now.

“We believe absolutely that the agency of the future still has creativity at its core, because that is what resonates best for every brand with customers, and what delivers the best effectiveness, but it has to have integration at its core.”

Greet says that the road map for the next 12 months continues to focus on consolidating the businesses into its single integrated agency model.

“Suddenly we have a vast range of clients, rather than just six companies that work with a dozen here or ten there.”

Both Greet and Lilley often talk up the agency’s credentials now as having the “scale and breadth of offering” that a lot of bigger agencies have, but that Hero is a “genuinely independent Australian agency,” and while Greet did say the focus is on consolidation now, Lilley admits that it will continue to grow.

“My entire heritage is independent agencies and to take a very entrepreneurial approach to growth as well, often through acquisition. So I’m always agitating on the side looking at more acquisition opportunities to sort of complicate James’ life a little bit more.

“We are looking at other acquisitions to either evolve a little bit further than what we’re already doing, or just to scale it up that little bit more.”

Lilley is vague on details, though says that “as long as it closes within the next six months”, there will be another business joining the Hero fold for Greet to integrate into the national offering.

Bringing the “best in class” capabilities from each of the six businesses under the one brand, Greet believes solves many of the headaches that agencies have to deal with in siloed offerings across a number of different offices.

The result is that “it doesn’t matter where anyone lives, as long as you’ve got the right people integrating with the client in the first place”, though he says that the only way to work is when you “remove that sort of light P&L sensitivity”.

At a time where many are fearing what may still come, Greet and Lilley are comfortable in the trajectory Hero is on, as the former says that independent agencies abilities to “respond, evolve and not have to wait to get shit signed off in triplicate across a period of six months” is making independents a more attractive opportunity for some of the most motivated and skilled talent globally.

“We can really only grow as fast as we can attract and develop the best talent, so we feel confident that we have a proposition that’s future focused as far as young talent is concerned.”

The post How Ben Lilley and James Greet avoided becoming a ‘Frankenstein agency’ in consolidating Hero appeared first on Mumbrella.