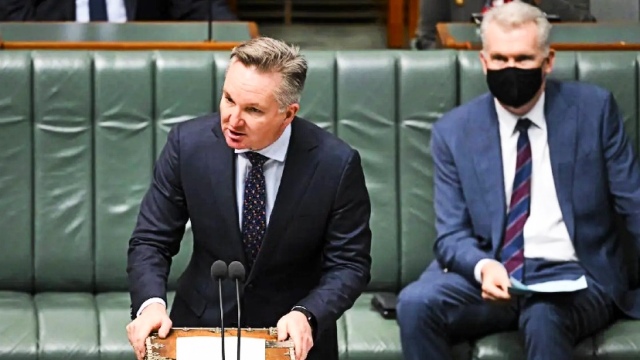 The Albanese government is set to pass its contentious climate change bill through Parliament and enshrine in law a target for reducing Australia’s carbon emissions.

The 43 per cent reduction in Australia’s carbon emissions from 2005 levels by 2030 will also require the government to seek scientific advice on emissions reduction and to make itself accountable to the Parliament on its progress.

Liberal MP Bridget Archer said on Wednesday night she would cross the floor to support the passage of the bill, but not accompanying amendments, in response to what she said was a desire for action from members of her northern Tasmanian electorate.

‘‘I’ve witnessed parts of the debate around the issue of climate change patronised by some as being a young lefty elite issue and I absolutely dispute this characterisation,’’ she said.

Right side of history

Earlier, Prime Minister Anthony Albanese said that the Coalition would be ‘‘frozen’’ on the wrong side of history by not supporting the law, which the government now confidently predicts will win support in both houses.

‘‘I don’t know what it will take for those opposite to wake up and to say, ‘Yes, we were wrong, the science is clear’,’’ he told Parliament.

“We have a great responsibility to this beautiful island continent that we live on to make sure that we act on climate change.

‘‘And then we will tell our children that we stepped up, we took responsibility and we met the moment.”

The last remaining major obstacle to the bill’s passage was lifted when the Greens confirmed on Wednesday they would support the bill in the lower house and in the Senate, where they hold the balance of power.

The party will secure an amendment to the bill that would require government agencies, such as Export Finance Australia and Infrastructure Finance Australia, to account for the targets when making decisions.

That amendment was criticised by Coalition MPs, including former resources minister Keith Pitt.

A ‘safeguard mechanism’, which sets a baseline for Australia’s largest industrial polluters, will also be reviewed with changes likely to be proposed by month’s end.

Kooyong MP Monique Ryan, who was elected on a platform of more ambitious emissions reductions, welcomed a historic “reset” of the national debate on climate change but otherwise qualified her support.

“Is this bill enough?” she asked in her second reading speech. “Today I will focus on the urgency of the need to act pragmatically.

“I’ll say today I will support this bill. But tomorrow without pause our work will continue.”

The Climate Change Authority will be the source of scientific guidance under the legislation.

Independent MP Andrew Wilkie, who declared support for the bill, said the authority had been “gutted” under the Coalition but still proposed a more ambitious target than the current government more than a decade ago.

“This bill is the bare minimum,” Mr Wilkie said.

“The uncomfortable truth is that the world has missed this opportunity to limit dangerous climate change within this century.”

Mr Wilkie pushed for a 75 per cent emissions reduction target.

The law is a roadmap towards a target of achieving net-zero emissions by 2050.

Energy Minister Chris Bowen said the law would be a minimum and support would be sought again for increased targets through to 2035.

“The climate wars may or may not be over, but they are certainly in retreat,” Mr Bowen said.

Only ‘Round One’ of negotiations

The party dropped its earlier demand that the government ban the opening of new coal and gas projects but said it would take up the fight again in October and try to cut off federal government support for fossil fuel exploration.

“This is Round One,” Mr Bandt said.

“With the talk of clean coal and budget cuts, the new government is already sounding far too much like the old government.

“Over the next six months, the battle will be fought on a number of fronts.”

Prime Minister Anthony Albanese had earlier declared the laws an opportunity to end the climate wars and urged the Coalition to reconsider its stance.

“This is an opportunity for the whole of the Parliament to be on the right side of history,” he told reporters in Canberra.

“(The Coalition is) stuck in the past. They’re frozen in time while the world warms around them.’’

Liberal MP Rowan Ramsey said the legislation risked stranding Australia “like a shag on a rock”.

He said that the targets had already been contained in an update to the nationally determined climate contribution and so passing them into law was about the “politics of the warm inner glow”.

Earlier this week Opposition Leader Peter Dutton told the members of a diminished Coalition party room that the party would seek to raise its emissions reduction target to a level above the 26 to 28 per cent agreed upon by the former Abbott government.

No firm target was offered by Mr Dutton, but he suggested that a review of an existing ban on the development of nuclear power by the shadow energy minister, the nuclear power booster Ted O’Brien, could provide a pathway for further reductions.

“It is high time that Australia had an honest and informed debate on the benefits and costs of nuclear energy,” he told the party room on Tuesday.

The post ‘Historic’ climate bill for reducing carbon emissions poised to pass into law appeared first on The New Daily.