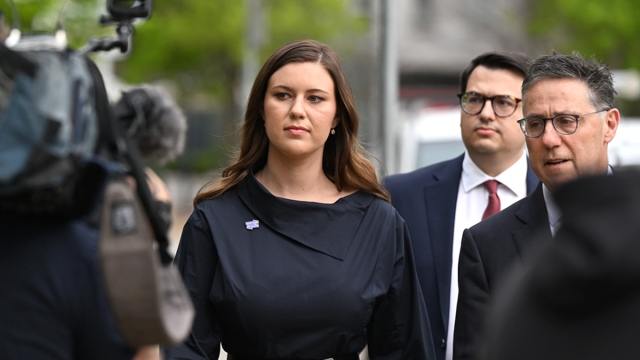 The trial of the man accused of raping former Liberal Party staffer Brittany Higgins has been temporarily delayed.

Other witnesses to be determined by the Crown will instead be called later in the day.

Bruce Lehrmann is charged with sexual intercourse without consent. He has pleaded not guilty and denies having sex with Ms Higgins.

During a heated exchange on Friday, Mr Whybrow put to Ms Higgins she pretended to have doctor’s appointments in the week after the alleged assault to “bolster” her story.

Ms Higgins earlier told the court she made multiple doctor’s appointments with the intention of going but could not bring herself to attend them.

“I intended to do the right thing but every time I went home I was collapsing and unable to get out of bed because I was so deeply depressed because I had been assaulted at work by a colleague,” she said.

Mr Whybrow asked Ms Higgins if she didn’t go to the doctor because she hadn’t had sex with anybody on the night she alleged she was raped.

“Nothing you are saying right now is true whatsoever and it’s deeply insulting,” Ms Higgins said.

“I don’t know if you’ve ever gone through a trauma before but confronting it head on with professionals is a really difficult thing to do.”

When she returns to the witness box, Ms Higgins is also expected to be questioned about her claim she was unable to organise a psychiatrist appointment after the alleged rape because there was a two-month wait.

Mr Whybrow put to Ms Higgins on Friday that she was offered an earlier appointment within a month of her first query but she said she could not recall.

She said she had been about to leave for Perth to work on the election campaign with then defence industry minister Linda Reynolds and a psychiatrist appointment in Canberra “would not have been feasible”.

Ms Higgins was also questioned about her delay in providing the police with her phone when she reopened the complaint against Lehrmann in 2021.

She admitted she had cleared the phone of some text messages as well as photos of herself with Liberal ministers or holding alcohol but denied she was trying to withhold evidence from police.

“I didn’t want to look at politicians in my camera roll anymore. I just wanted them gone.”

Chief Justice McCallum reminded the jury not to read media reports about the trial or discuss anything relating to it with people at home.

“That would be so unfair to Mr Lehrmann … it could only detract from the task that you have,” she said.

The trial is expected to run for at least another five weeks.

The post Higgins ‘unavailable’ to give evidence appeared first on The New Daily.